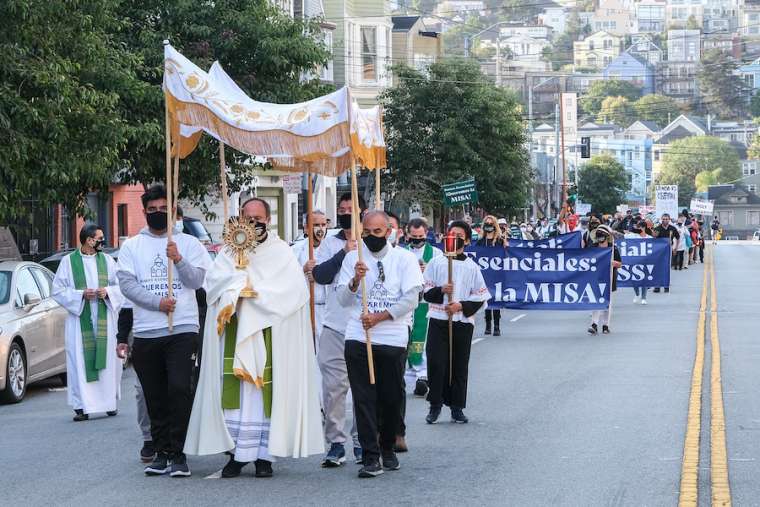 The U.S. Department of Justice on Sept. 25 warned San Francisco officials that current restrictions on public worship in the city may be unconstitutional, drawing praise from Archbishop Salvatore Cordileone.

“Catholics in San Francisco have been patiently suffering injustice for months. At last, a competent legal authority is challenging the city’s absurd rules, which have no basis in science, but are grounded in hostility to religion and especially the Catholic Church,” Cordileone said Friday.

The DOJ on Sept. 25sent a letterto Mayor London Breed, warning that the city’s rule allowing only “one worshipper” in places of worship at a time regardless of their size— while allowing multiple patrons in other indoor establishments— is “draconian” and “contrary to the Constitution and the nation’s best tradition of religious freedom.”

San Francisco’s restrictions on public worship remain among the strictest in the country. Until Sept. 14, public worship in the city was restricted to 12 participants outdoors, with indoor services prohibited.

As of Sept. 14, houses of worship are allowed to have 50 people at religious services outdoors, with indoor services still prohibited until at least Oct. 1.

San Francisco’s revised health order from Sept. 14 states that “[o]nly one individual member of the public may enter the house of worship at a time,” with no reason given.

The DOJ letter called on the mayor to treat places of worship equally with other venues where people share enclosed spaces, such as gyms, tattoo parlors, hair salons, massage studios, and daycares.

At those establishments, San Francisco city authorities already allow capacities of between 10 and 50 percent, depending on the type and provided that sanitary measures and 6-foot distancing is followed.

California’s church service limits earlier this year were challenged by a Pentecostal church, which argued houses of worship were being unfairly treated more strictly than other secular venues, including restaurants, hair salons, and retail stores.

In May, the U.S. Supreme Court sided with the state of California. In a 5-4 decision, Chief Justice John Roberts argued that the court lacks the expertise and authority to second guess the decisions of elected officials in the context of public health decisions during a pandemic.

The DOJ cited Chief Justice John Roberts’ concurrence in the May 2020 case, in which he wrote that “restrictions on places of worship” may be consistent with the First Amendment, but only when such restrictions “apply to comparable secular gatherings.”

The DOJ said it is reviewing their options and may take further action.

San Francisco City attorney Dennis Herrera defended the city’s actions in a statement Friday. He did not address the apparent disparity between restrictions on worship and on secular activities.

“Maybe the federal government should focus on an actual pandemic response instead of lobbing careless legal threats. San Francisco is opening up at the speed of safety,” Herrera said.

“Religious gatherings indoors and outdoors are already set to expand in a few days. This expansion is beyond what is described in the federal government’s letter. It’s consistent with San Francisco’s careful approach and follows closely behind what the State of California allows.”

The mayor has said the city will allow indoor worship services with a 25 person limit by Oct. 1. The Cathedral of St. Mary of the Assumption has a capacity of nearly 2,500 people.

“One person at a time in this great Cathedral to pray? What an insult. This is a mockery. They are mocking you, and even worse, they are mocking God,” Cordileone said in an outdoor homily Sept. 20.

Catholics in San Francisco had marched in Eucharistic processions across the city that day to protest the city’s continued restrictions on public worship, culminating in several concurrent outdoor Masses as the Cathedral.

Priests at many parishes around the archdiocese, including the Cathedral, are celebrating multiple Masses every Sunday— outside, and spaced out— in order to adapt to the restrictions.

Outdoor Masses pose their own health challenges, as the Bay Area is experiencing some of the worst air quality in the world, due to smoke and other pollutants coming from wildfires ravaging the West Coast.

Hotels in San Francisco are fully reopened; indoor gyms are set to reopen at 10% capacity; and most retail stores are allowed to operate at 50% capacity, while malls are restricted to 25%. Gyms operated in government buildings for police officers and other government employeeshave already reopened.

In addition, Archbishop Cordileone has noted, businesses requiring extended, close one-on-one contact reopened Sept. 14, such as hair salons, nail salons and massage parlors, but “we are allowed only one person in church at a time for prayer.”

While Cordileone has said city officials have been “cordial and respectful” in their dialogue with the archdiocese, he said the city still has not responded to the archdiocese’s safety plan— outlining how churches could be safely opened for indoor services— which they submitted in May.

The City of San Francisco has been closely monitoring Catholic churches in the city and hasrepeatedly issued warningsto the archdiocese for apparent health order violations.

More than 19,000 peoplehave signed a petitionsupporting Archbishop Cordileone’s call to end “unfair” restrictions on the Mass.

The People of Praise Community: Wh...