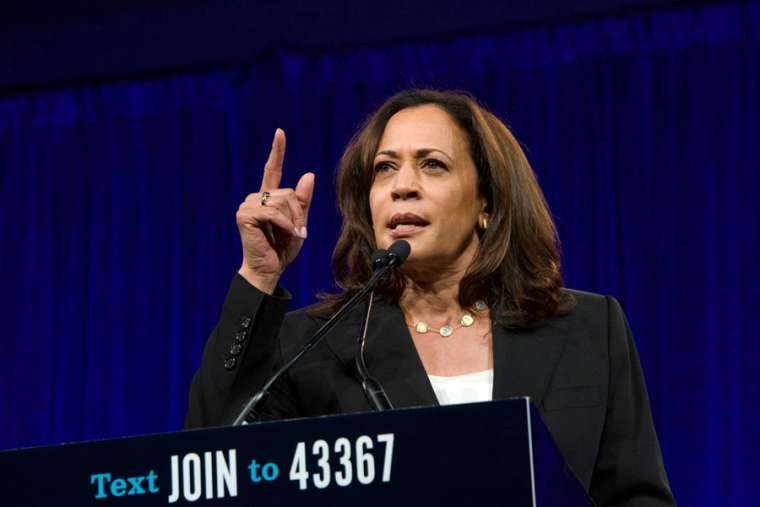 Vice presidential candidate Kamala Harris questioned a judicial nominee over his affiliation with a Christian adoption agency, and another about briefs he wrote for religious liberty lawsuits against the federal contraception mandate. She also questioned another nominee because he had been endorsed by a Texas pro-life organization.

In December 2018, CNA first reported that, as a member of the Senate Judiciary Committee, Harris and Sen. Mazie Hirono (D-HI) had criticized a Catholic judicial nominee for his membership of the Knights of Columbus. Those questions now appear to be for Harris part of a pattern of scrutinizing the association of judicial nominees with various faith-based groups and civic organizations, including Christian adoption agencies and women’s pregnancy support centers.

In August 2018, Harris questioned Jonathan Allen Kobes, nominee to the Eighth U.S. Circuit Court of Appeals, about his membership of the board of Bethany Christian Services, a global non-profit that provides adoption services and crisis pregnancy support.

In 2012, Kobes was on the board of Bethany’s location in Sioux Falls, South Dakota, according to his nominee questionnaire for the Senate Judiciary Committee.

Harris, in her questions for the record, asked Kobes about Bethany’s Philadelphia location. The city of Philadelphia in 2018 had stopped referring foster children to both Bethany and Catholic Social Services of the archdiocese, due to their faith-based policies of not working with same-sex couples on foster children placement.

Bethany eventually changed its policy and began working with same-sex couples by June 2018, while Catholic Social Services maintained its former position, and has had no new foster care placements with Philadelphia. Its legal battle with the city has reached the Supreme Court, which will hear arguments this fall in Fulton v. City of Philadelphia.

After Bethany Christian resumed its foster care placements with the city of Philadelphia, Harris asked Kobes if he was “aware that Bethany Christian Services discriminated against LGBTQ couples who sought to adopt children?”

Kobes replied that he sat on the board of the Sioux Falls chapter of the organization, and was “aware” of Bethany’s policy.

Harris followed up her initial question by asking the nominee if he contributed to the group’s policy through advice, advocacy, or by drafting it, to which he replied in the negative.

In a Dec. 11, 2018 release after Kobes’ confirmation by the Senate, the National Abortion Rights Action League (NARAL) noted his position on the board and called Bethany Christian “a fake women’s health center in South Dakota.”

In 2018, Harris also questioned three different judicial nominees over their membership in the global Catholic organization Knights of Columbus. She said that the pro-life and pro-marriage views of the Knights conflicted with constitutional rights to abortion and same-sex marriage, and questioned the nominees’ suitability for office.

CNA was first to report her questioning of Brian C. Buescher in Dec., 2018. He was nominated for the U.S. District Court for the District of Nebraska and eventually confirmed. She asked him if he was “aware” that the Knights of Columbus opposed “a woman’s right to choose” and “marriage equality” when he became a member, and if he agreed with a statement from Supreme Knight Carl A. Andersonon abortion.

In her written questions on May 2, 2018, for the nomination of Peter Phipps as a district court judge, Harris noted his membership in the Knights since 2011 and said the group was “limited only to men.”

“The Knights of Columbus state that they ‘[defend] the right to life of every human being, from the moment of conception to natural death,’” Harris noted, before asking Phipps if, as a member, he “carried out” this mission and would do so on the bench.

“Must you swear an oath in order to join this organization? If so, what is that oath?” Harris asked. “When your group’s organizational values conflict with litigants’ constitutional rights, how can litigants in your court expect a fair hearing?”

Later in November 2018, Harris brought up the Knights’ membership of nominee Paul Matey, who was being considered for the federal Third Circuit appeals court.

She noted that the Knights were a “top contributor” to Proposition 8, the 2008 California ballot initiative to define marriage as between one man and one woman. She asked Matey if he was “aware” of the Knights’ stance on marriage and, in reference to same-sex marriage, asked if he believed “the right to marry carries an implicit guarantee that everyone should be able to exercise that right equally?”

Harris also cited Supreme Knight Carl Anderson’s 2016 statements against abortion as “a legal regime that has resulted in more than 40 million deaths” and which is “the killing of the innocent on a massive scale.” She asked Matey if he was “aware” of that stance and if he agreed with Anderson’s statements.

“Do you believe that a fetus is entitled to any protection under the U.S. Constitution?” Harris asked Matey.

After CNA reported Harris’ questions to Buescher, Supreme Knight Carl Anderson said that “such attacks on the basis of our Catholic faith are hardly new. The Knights of Columbus was formed amid a period of anti-Catholic bigotry.”

Harris also grilled nominees over their past statements on sexuality and gender identity. In her questions to Kobes, she brought up a 2017 statement in which he said that the redefinition of marriage was still “brand new” in the U.S. and a “huge shock” to conservatives, and that access to bathrooms by persons of a different biological sex was still a “very difficult” issue for many people.

“What was ‘very difficult’ about allowing transgender students to express their gender identities?” Harris asked Kobes.

In another case, Harris brought up previous legal briefs written by current Ninth Circuit Appeals Court Judge Daniel Collins; he had previously authored briefs in support of the Little Sisters of the Poor and Hobby Lobby in their cases against the HHS birth control mandate. Collins wrote on behalf of the Ethics and Public Policy Center.

She focused on not only the writings of nominees, but also endorsements of them by other organizations.

In her written questions submitted on May 29, 2019 regarding district court nominee Jason Pilliam, Harris focused on a 2018 endorsement of Pulliam for the Texas Fourth Court of Appeals by the Texas Leadership Institute for Public Advocacy (TLIPA). The group says it rates candidates for office based upon “‘non-negotiable’ intrinsic moral evils” that include abortion and abortion-inducing drugs, euthanasia, non-traditional marriage, human cloning, and destruction of embryos for research.

“Do you believe that reproductive rights, marriage equality, and the other matters mentioned on TLIPA’s website are ‘moral evils that have plunged our nation into deep moral crisis’?” she asked.

Regarding the nomination of Eric Murphy to the Sixth Circuit federal appeals court, Harris said in her Oct. 17, 2018 written questions that he signed friend-of-the-court briefs in support of states’ decisions to defund Planned Parenthood.

“Did you consider the abortion access of poor women before signing these briefs?” Harris asked.

Cardinal Parolin in Lebanon: The C...