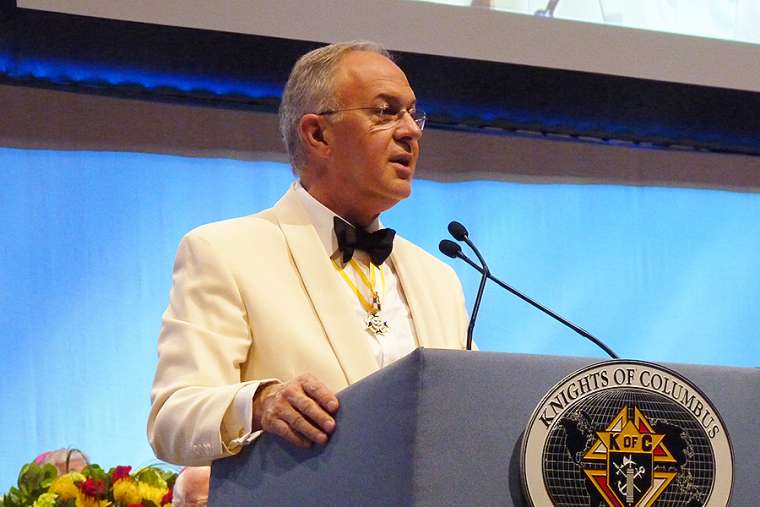 The 138th annual convention of the Knights of Columbus begins today— the first in the organization’s history to not be held in-person.

The New Haven, Connecticut-based fraternal and charitable organization is encouraging its members to tune in to the convention online. Due to coronavirus restrictions, the gathering is being held virtually. Last year’s convention took place in Minneapolis, Minnesota.

The convention comes a few months after the Vatican announced that Fr. Michael McGivney, founder of the Knights of Columbus, will be beatifiedfollowing Pope Francis’ approval of a miracle attributed to his intercession.

Founded in New Haven in 1882, the Knights of Columbus was originally intended to assist widows and their families upon the deaths of their husbands. It has grown into a worldwide Catholic fraternal order, with more than 2 million members carrying out works of charity and evangelization across the globe. The Knights also offer life insurance policies to their members.

Fr. McGivney, the Knights’ founder, will be beatified on October 31, the Vatican’s Congregation for the Causes of Saints announced in late July.

During the past year, Knights around the world donated more than 77 million service hours and $187 million for worthy causes in their communities, including millions of dollars for persecuted Christiansaround the world, the organization says.

The 2020 convention will begin with an opening Mass at 6:30 p.m. Eastern, celebrated by Archbishop Leonard Blair of the Archdiocese of Hartford. This will be followed by Supreme Knight Carl Anderson’s annual report, highlighting the group’s achievements and announcing new initiatives, at 8 p.m. Eastern.

The Mass is set to feature a message from Pope Francis, which the Vatican Secretariat of State delivered to the Knights in mid-July.

“His Holiness is grateful for these and for the many other countless ways in which the Knights of Columbus continue to bear prophetic witness to God’s dream for a more fraternal, just and equitable world in which all are recognized as neighbors and no one is left behind,” the letter reads in part.

An annual memorial Mass will be offered for all deceased Knights of Columbus and their families on August 5 at 2 p.m. Eastern.

Among the Knights who died in the past year was former Supreme Knight Virgil Dechant, who passed away on Feb. 15, 2020, and was the Order’s longest-serving supreme knight, holding office from 1977 to 2000, the organization said.

After the memorial Mass, the Knights will hold an awards ceremony to honor the members’ service. This will take place at 3:30 p.m. Eastern on August 5.

Vatican-funded projects in Latin A...

St. Aristarchus — A Prisoner Who S...