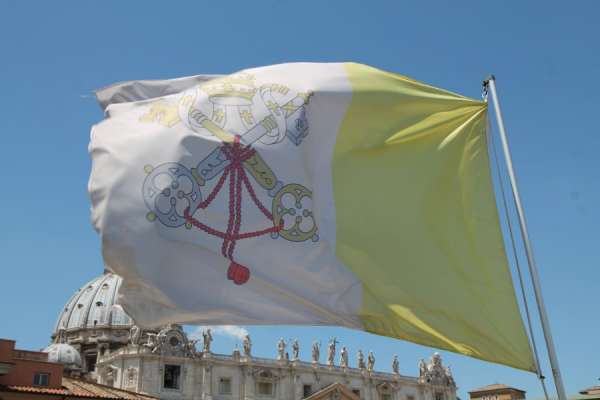 While the Vatican has not commented on his current status, Carlino is listed as a resident of the Italian city of Lecce on the website of the local archdiocese.

Salvino Mondello, Carlino’s lawyer, responded this week to claims about the suspended secretariat official in an Oct. 15 article in Italian newspaper La Stampa.

The lawyer’s letter appeared as the Vatican announced that Pope Francis had decided to take away the Secretariat of State’s responsibility for financial funds and real estate assets, including the London property.

Referring to the Secretariat of State’s purchase of a luxury property development in west London, Mondello wrote that it was “absolutely erroneous and improper to define Msgr. Carlino as ‘one of the protagonists of the scandal.’”

Mondello said that Carlino intervened in the affair only from February to May 2019, when he was asked to help reach an agreement with the broker Gianluigi Torzi for handing over the voting shares of the property at 60 Sloane Avenue.

Torzi’s company Gutt, which owned the London building, had maintained full voting rights, even though the Vatican owned the majority of the company’s capital.

The lawyer said that “the need for negotiations with Torzi” had been already decided, “with the endorsement of the Holy Father,” previous to Carlino’s entrance on the scene.

Mondello said that Carlino negotiated the agreement “under the guidance” of Archbishop Edgar Peña Parra, who replaced Becciu as “sostituto” at the secretariat, and with collaboration from a well-known English law firm, Mishcon de Reya, which drew up the agreement.

According to Mondello, the agreement for the transfer of Torzi’s 1,000 Gutt shares with voting rights to the Secretariat of State was finalized on May 2, 2019. He also claimed that Carlino negotiated Torzi down from his initial request of 20 million euros to 15 million euros.

Carlino’s lawyer did not address why the priest was listed in 2019 as a registered director of the holding company, London 60 SA Ltd., through which the secretariat controls the west London property development.

Mondello also defended the legitimacy of the London deal. He cast doubt on an alarm raised by Gian Franco Mammì, the general director of the Institute for Works of Religion (IOR), commonly called “the Vatican bank,” regarding the London purchase in July 2019.

Mammì had said that a request for funding from the IOR for the Secretariat of State to cover the repayment of a mortgage seemed “opaque” and the deal could be connected to criminal activity.

According to Mondello, Mammì’s complaint “appears outdated by the facts, since the settlement of the mortgage on the London building was recently financed by the APSA, in September 2020.”

He added that this financing took place “after a series of checks and verifications, carried out by international law firms of undoubted prestige and high professionalism, which evidently excluded aspects of economic or legal illegitimacy in the operation.”

According to the lawyer’s letter, Carlino “did not deal with other operations carried out by the Secretariat of State” and “has never been part of the board of the Maltese Centurion fund and has never asked for, nor solicited, any assignment in this regard.”

The Secretariat of State’s decision to invest tens of millions of euros in the Centurion Global Fund has also raised questions about prudential use of Vatican resources.

Mondello ended his letter by emphasizing “the honest, correct and transparent work of Msgr. Mauro Carlino” and said he was convinced ”that the investigation of the Promoter of Justice — although broad and complex due to the need to investigate other aspects that do not concern the person of the aforementioned — can be defined in a way consonant with truth and justice, in a short time.”

Patience and the priesthood: A voc...