Lebanese Youth a Light of Hope in Beirut Blast Aftermath 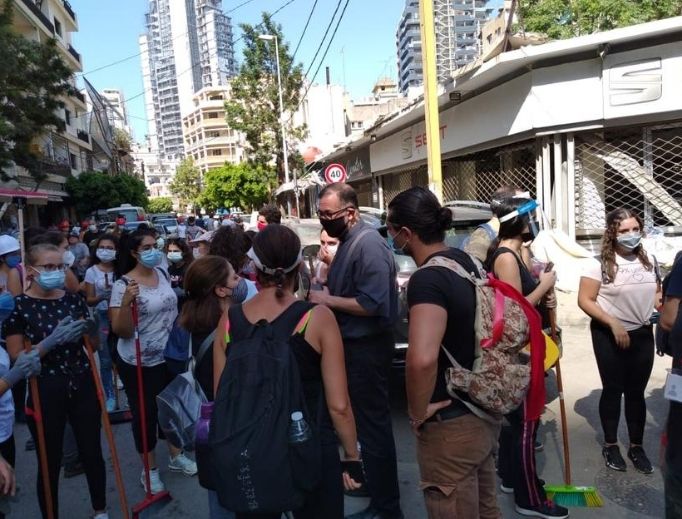 Lebanese Youth a Light of Hope in Beirut Blast Aftermath

‘They are the sign of hope for us in this catastrophe,’ said Father Toufic Bou-Hadir, director of the Maronite Patriarchal Commission for Youth.

BEIRUT — In the aftermath of the colossal double blast that ripped through Beirut Aug. 4, it was the country’s youth, rather than government officials, who took the initiative to clear the wreckage and serve suffering people in affected neighborhoods.

Armed with brooms and shovels and a strong resolve to come to the aid of the afflicted, thousands of youth from all over the country — Christian and Muslim alike — flooded the stricken areas.

Among them were teams of Maronite Catholic youth from parish and apostolic youth groups.

“These youth came on the night of the blast — nonstop, they gave their heart and their commitment, to be near the people there. They are the sign of hope for us in this catastrophe,” said Father Toufic Bou-Hadir, director of the Maronite Patriarchal Commission for Youth, which helped to coordinate the participation of the Maronite groups.

Noting that St. John Paul II often said that the youth are “the heroes of hope,” Father Bou-Hadir remarked to the Register: “The youth of Lebanon made this a reality. They confirmed that the light of hope shines from this darkness, from everything that causes despair. Thanks be to God for our youth who work nonstop.”

“They were really there, to clean, to serve all the needs of the people” affected by the blast, Father Bou-Hadir added.

“It was his guidance from the beginning of this blast, to be near to the people. He was the first to come there to visit, to strengthen the morale of everybody,” Father Bou Hadir pointed out. And the patriarch commended the youth, giving them a message of encouragement and gratefulness for all they are doing.

For 19-year-old Maronite Johny Khoueiry, motivation came from seeing the horrific images the night of the blast as he watched the news from his home in Mount Liban, north of Beirut.

“I was so shocked,” he told the Register. “So much help is needed, and I can give hope. That is what motivated me to get involved.”

Arriving at the devastated area of Beirut the next morning, the destruction was greater than Khoueiry imagined.

“It is not the Beirut that I knew. I never lived through the war. I never experienced anything like this. And I realized, ‘Now I’m in it,’” he told the Register.

Seeing all the streets covered in rubble and damage everywhere, “I was thinking, ‘How are we going to remove all this? How will the people continue living, especially when winter comes?’” he said.

But all the youth persisted, with courage in the face of misery and devastation.

“There was no place where they would have been safe,” he said.

Building after building, the youth forged ahead.

“Thank God, there were so many volunteers,” Khoueiry said. But the scope of the work to be done is still enormous, and the youth continue, day after day.

Khoueiry recalled visiting an elderly man in a damaged building. The gentleman was sitting in a chair on his balcony, a small cat resting on his arm. It was three days after the blast, and the floors were still covered with broken glass. “He was so lonely and sad, and he had no one to help him.”

“The first thing, we listened to him, to give him the chance to remove all his fear, all his hurting, all his loneliness with words,” Khoueiry recounted.

“We are here for you,” the Maronite youth told the teary-eyed man, who had never married and had no family. “We are all in this together, and thank God that you are still alive and God is giving you a new life.”

The team then set out about the manual work of cleaning up the debris and installing temporary plastic sheets over the glassless windows. They also arranged, with the priest of the local Maronite parish, for the man to receive a daily hot meal from the church.

Amira Hanna, 19, came to help from Rabweh, which is about 10 miles north of Beirut and overlooks the city.

“In this catastrophe, I realized that the youth have to be strong, to support our country and to step in and take care of the old as well as the young. Sometimes it’s just our presence, to be beside them, to give them hope.”

Father Bou-Hadir noted that the “remarkable” outpouring of help from the youth of all religions shows that “the division among the Lebanese is ‘fake news.’”

“From everywhere — from the north to the south — all the confessions worked together as one. The Lebanese are always one people, one for Lebanon. The politicians make the divisions, but the people make unity,” the priest stressed.

Likewise, Father Bou-Hadir pointed out, “while we are serving, as the Church, we don’t ask, ‘What is your religion?’” Instead, he said, it’s about “how much you are vulnerable, how much you are in need: We are here, near you.”

Giselle Nacouzi, 30, a Maronite Catholic who came from Antelias, outside of Beirut, to help, told the Register that, in addition to rebuilding, there’s also a need to address the psychological wounds of the people following the severe trauma they experienced. “They need hope, and they need Jesus — now, more than ever,” Nacouzi said.

Numerous Catholic aid organizations are on the ground to help, too. The Knights of Columbus hassent$250,000 for disaster relief to Lebanonfollowing the Beirut blast.

The colossal disaster comes as Lebanon was already sinking further in itsworst economic crisisin modern history. The Lebanese pound has collapsed, losing more than 80% of its value against the dollar in less than a year, which has led to a more than threefold increase in the prices of consumer goods, amid rising unemployment, which has been worsened by COVID-19 lockdown measures.

A report released Aug. 19 by the U.N. Economic and Social Commission for Western Asia (ESCWA) estimates that more than 55% of the country’s population “is now trapped in poverty and struggling for bare necessities.”

That figure was almost double the rate of 28% for last year, the report said.

ESCWA said Lebanon’s middle class has shrunk from 57% of the population in 2019 to less than 40% this year.

But Nacouzi told the Register that, despite the magnitude of the current tragedy, “I believe Lebanon still has a future. Out of the darkness, God can make something beautiful.”