Let’s Celebrate the Vigil of Pentecost 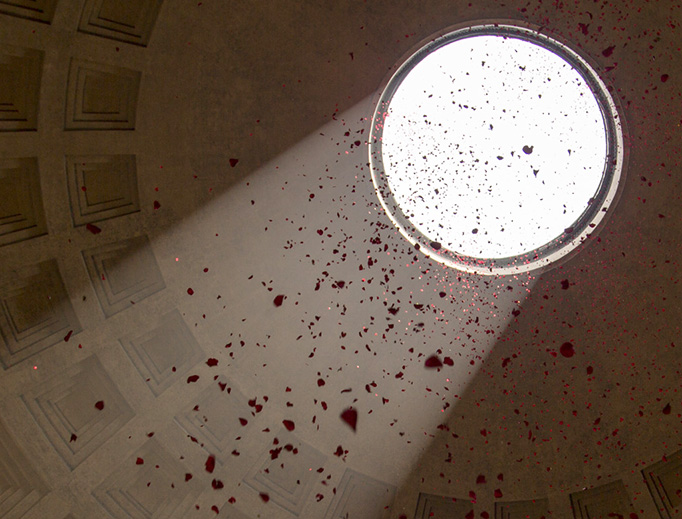 Let’s Celebrate the Vigil of Pentecost

This is an opportunity to make the return to Mass as solemn and festive as it should be.

As we approach the end of May, some dioceses have begun to remove the nationwide moratorium on celebration of public Masses. Week by week, a few dioceses are resuming Sunday Masses.

May 31 is the Solemnity of Pentecost, among the three most important celebrations in the Church’s liturgical year. Easter is, of course, the center of that liturgical year, and the Easter liturgy par excellence is the Paschal Vigil, celebrated on Holy Saturday night.

The Church restored the Paschal Vigil to its rightful solemnity, place and significance in the 1950s. Unfortunately this year, almost all Catholics in the United States were deprived of the opportunity to celebrate the Paschal Vigil. As the liturgical calendar seeks to retain the significance and temporal place of at least its great feasts, that opportunity has been lost in 2020: as the Congregation for Divine Worship and the Discipline of the Sacraments noted in its March 20 “Decree in the Time of COVID-19”: “The Easter Triduum … which is preceded by Lent and crowned by Pentecost … cannot be transferred to another time” (No. 1).

But that reference to Easter being “crowned by Pentecost” should inspire Catholics where public Masses have resumed to celebrate an almost unknown liturgical treasure of the reformed liturgy: the Extended Form of the Vigil of Pentecost. (The Register published a great article about it last year).

Like Easter, Pentecost has a solemn Vigil. Because it is a vigil (“vigil” derives from vigilia, a “watch”) it is necessarily extended (a nice of way saying “long”). Alas, most parishes, ostensibly for “pastoral reasons,” answer our Lord’s question in Matthew 26:40 “no” and simply opt for a normal Saturday evening anticipated Sunday Mass. But even that Saturday evening Mass has faint echoes of the larger Vigil, because its readings (like those of the Vigil Mass of Christmas, celebrated in the evening of Dec. 24 before “Midnight Mass”) are in fact different from Sunday’s (the “Mass during the Day”). The Solemn Vigil is referred to in the liturgy books as the “Extended Form,” while the typical Saturday night Pentecost Mass (essentially a regular Mass, called the “Simple Form”).

In its 1988 document Paschalis solemnitatis (“On the Preparation and Celebration of the Paschal Feast”), the Congregation for Divine Worship urged that “[e]ncouragement should be given to the prolonged celebration of Mass in the form of a vigil, whose character is not baptismal as in the Easter Vigil but one of urgent prayer, after the example of the Apostles and disciples, who preserved together in prayer with Mary, the Mother of Jesus, as they awaited the Holy Spirit” (No. 107).

This year, as most American Catholics have lost good parts of Lent and Eastertide, it is fitting that where Mass has been resumed, it should come back solemnly, deliberately, “in the form of a vigil … of urgent prayer” of expiation, petition, thanksgiving and adoration. I implore parish priests not to take the easy (“pastoral”) way out and opt for the “Simple Form.” I make that point because, just exiting the coronavirus shutdown, some priests may be tempted to “get ‘em in and get ‘em out” as fast as possible. This is an opportunity to make the return to Mass what it should be: solemn and festive, even if that takes some creativity, e.g., perhaps celebrating outdoors to expand space.

It can be preceded by part of Evening Prayer I from the Liturgy of the Hours (the psalms and canticle) at which point the priest (having omitted the penitential rite, Kyrie and Gloria) prays the Collect. [Other parts of Evening Prayer will appears later in the Mass]. If Evening Prayer does not precede the Mass, the Vigil Mass begins in the usual way, but omits the Gloria. In both scenarios, there is then an additional invitation to prayer and reflection at the start of an extended Liturgy of the Word.

As in the Easter Vigil, the Vigil of Pentecost features multiple readings. Easter has a maximum of seven Old Testament readings (although, again, for “pastoral reasons” they can be truncated to three to include Exodus 14) plus an epistle and Gospel. Pentecost has four Old Testament readings: Genesis 11 (the Tower of Babel); Exodus 19 (Moses on Mount Sinai); Ezekiel 37 (the Spirit who revives the plain of bones); and Joel 3 (the promise to pour out the Spirit). [At the usual Saturday night “Pentecost Vigil” Mass with which most Catholics have been familiar in the average parish, any one of those four Old Testament lections can be the “First Reading”). Like the Easter Vigil, each of these readings is followed by its own responsorial psalm (two options for the Exodus 19 reading) and a concluding prayer. There is no permission to reduce the four readings, although a period of extended silence can substitute for the responsorial psalms and concluding prayer. I want to underscore, however, that priests should not do this. Scripture (including the Psalms) is divinely inspired; my thoughts are not. While this may extend the length of the Vigil, the counsel of Paschalis solemnitatis on the Easter Vigil also arguably applies here: everything should be done “… so that the character of the … Vigil, which demands that it be somewhat prolonged, be respected at all costs” (No. 85, emphasis added).

Like the Easter Vigil, the transition from the Old to New Covenants, the Old to New Testament, is marked by the joyful singing of the Gloria followed by the Collect. Then follows the Epistle (Romans 8) and Gospel (John 7).

In the Extended Vigil of Pentecost, Mass then continues in its normal course (with, of course, special Prayer over the Offerings, Prefaces, Communicantes for Eucharistic Prayer I, Solemn Blessing and double Alleluia at the end of Mass). If Evening Prayer I had begun the Extended Vigil, then the Magnificat with its vespers antiphon is sung before the Postcommunion Prayer of Thanksgiving. Apart from being an integral part of Evening Prayer, the Magnificat reminds us of Mary’s presence in the Pentecost Cenacle as well as expressing the sentiments appropriate to every Christian disciple.

I suggest this is an appropriate way to end our strange Eastertide of 2020 and resume the celebration of public Mass.

One final note: Paschalis solemnitatis concludes by noting that “’it is proper to the paschal festivity that the whole Church rejoices at the forgiveness of sins’” and urges “’by means of a more intensive pastoral care and deeper spiritual effort’” those feasts be celebrated in “the Lord’s grace” with effect in the lives of the faithful (No. 108). Sin always remains the barrier to the worthy and spiritually fruitful celebration of the liturgy and, in some dioceses, access to other sacraments as well as the Eucharist has been impeded. Pastors should strongly consider a generous and prolonged period of hearing confessions prior to the solemn Pentecost Vigil.

Protecting Grandma After the Pande...