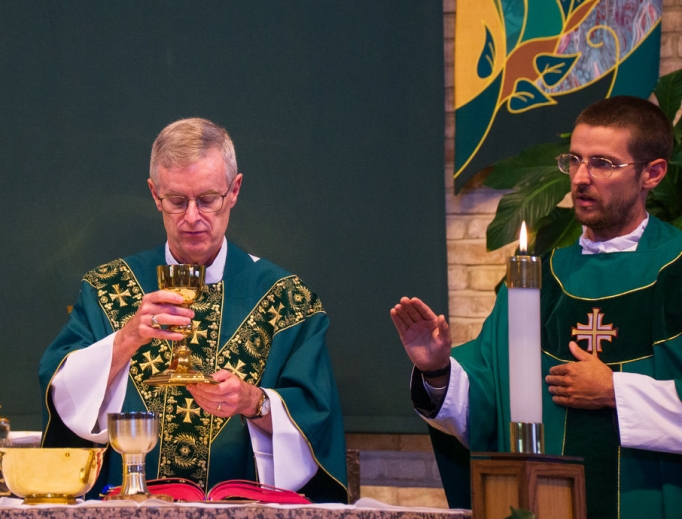 Meet Fathers Peter and Andrew Infanger, biological father and son. Their now-common vocation has brought a new dimension to their father-son relationship.

Before newly-ordained Father Peter Infanger said his Mass of thanksgiving this Father’s Day, his biological son, Father Andrew Infanger, who concelebrated with him at St. Matthew Church in Glendale Heights, Illinois, told his father jokingly that he wasn’t allowed to take notes on his homily.

Calling himself a “recovering control person,” Father Peter, 65, acknowledged that his youngest son, a 32-year-old priest ordained two years earlier for the Milwaukee Archdiocese, has helped him with public speaking.

Father Andrew “is a very gifted homilist, and I’ve learned things from him,” said Father Peter, who was ordained for the Joliet Diocese. “He’s able to do things extemporaneously and speak without notes, both of which I struggle with.”

Their now-common vocation has brought a new dimension to their father-son relationship, as Father Peter now adjusts to his role as parochial vicar at St. Walter in Roselle, Illinois.

Evident in Father Peter’s new vocation — as well as before his wife’s death, when he was raising a family and working in marketing — has been his willingness to let go when God has requested it.

“He was letting go of things long before he entered the seminary,” said Father Andrew, who serves at the Wisconsin parishes of St. Robert in Shorewood and Holy Family in Whitefish Bay and will begin serving at the University of Wisconsin Milwaukee’s Catholic Newman Center in August. “The seminary was maybe a capstone on letting go.”

Father Peter had an early experience of surrender in the late 1980s, when he struggled with work and his marriage while living in St. Louis. He separated from his wife and two young sons.

While many people advised him to divorce, a non-Catholic cousin told him about God. “He introduced me to God, who knew me by name and had a plan for me and loved me beyond all telling,” said Father Peter, who had been a nominal Catholic before that point. He started reading the Bible and reconciled with his wife.

“The fact is, I learned at age 34 I didn’t know anything, and I had to start from ground zero,” he said. “God was gentle with me because he realized I had a lot to go.”

With his newfound zeal, Father Peter wanted to serve in full-time ministry, but his wife persuaded him to keep his job to support the family and make ministry work his avocation until he retired. He dove into teaching catechism and helping the poor and volunteered in prison ministry, among other ministries.

Father Andrew didn’t think about his dad’s conversion while growing up, but he now sees it in a different light.

On a family vacation to Jamaica when Father Andrew was in sixth grade, his dad arranged for a Jamaican priest to come to the family’s hotel to offer Mass or Communion.

“I think of how strange that is in hindsight; and I look back — I hardly know a single person who would figure out how to get a local priest to come to your hotel balcony,” he said. “At the time, I thought it was annoying. I wanted to sit on the beach.”

When Father Andrew was in middle school, his father saw him thinking more about faith. His son attended Dominican University near Chicago and then served with Catholic Youth Expeditions in Door County, Wisonsin, an ecclesial community that leads retreats of prayer, proclamation of the Gospel and outdoor adventure.

After working at a parish for a year, Father Andrew entered St. Francis de Sales Seminary in St. Francis, Wisonsin.

While Father Andrew was in seminary, Father Peter was transferred to Chicago for his job. During the move in 2013, his wife died suddenly of breast cancer. Their future plans disrupted, Father Peter thought again about ministry. He quickly let go of the home he’d shared with his wife and moved into a small apartment.

Father Peter felt called to do something different, and so he wasn’t totally surprised when a member of his men’s group asked him if he had considered priesthood.

At first, Father Andrew and his older brother, Michael, who lives in Park Ridge, Illinois, with his wife and two children, encouraged their father to become a deacon. “I think in the back of your mind there’s a fear of, well, if he becomes a priest, what’s going to happen to our family?” Father Andrew said.

Father Andrew said his own vocation may have played a role in his father’s decision to pursue priesthood but noted that Father Peter was already moving in that direction. “His faith was and is always stronger than mine,” Father Andrew said.

“I found the more I let go, the more I’m open to the little miracles God does provide; because with this whole pandemic thing, we’ve fooled ourselves that we’re in control,” he said. “We’re not in control, and this is a wake-up call.”

While in seminary, Father Peter gained insights about marriage. “I remember one time it brought me to tears,” he said. “I wish I’d known this when I was married. There’s a lot that I learned in seminary about being a spouse.”

He added, “All those things you can give as a married person in ministry are still true, except now I’m preaching every day, I’m hearing confessions, counseling people, anointing people that are in the hospital. I just really feel God’s given me a chance to redeem the mistakes I made in the first half of my life, and so I’m really happy that he’s given me some humility, finally.”

Father to Father (and Son)

After Father Peter’s ordination, during which Father Andrew placed a chasuble on his father, the son approached to receive a blessing from the father — a special moment of priestly blessing.

Father Andrew “said early on that … he wanted me to be his father,” Father Peter said. “He didn’t want me to be so much a fellow seminarian. I’ve tried to respect that. He lost his mom, and I don’t think he wanted to lose his dad.”

On the other hand, Father Andrew acknowledged that priests share a special bond on a certain level without speaking, which is also a lesson for fathers and sons, too. “I think for everyone, particularly for fathers and sons, there comes a time when you begin to understand your father a little more,” he said. “But I’d say the difference, the biggest change for me, personally, is really just to have that unspoken understanding on a different level that I’m beginning to have with him.”

Father Peter doesn’t know how many years God will bless him with to continue deepening this understanding with his son and serving as a priest, but he noted that longevity is in his genes.

“I’m so grateful God woke me up to his world and what he’s asking us to do: to now love and serve him,” Father Peter said. “Even if I only have a year, that’s okay. I’m going to be with him for eternity, and that’s what we all should be wanting.”