Listen to the Saints’ Timeless Words of Truth: Words of Hope From Holy Lives 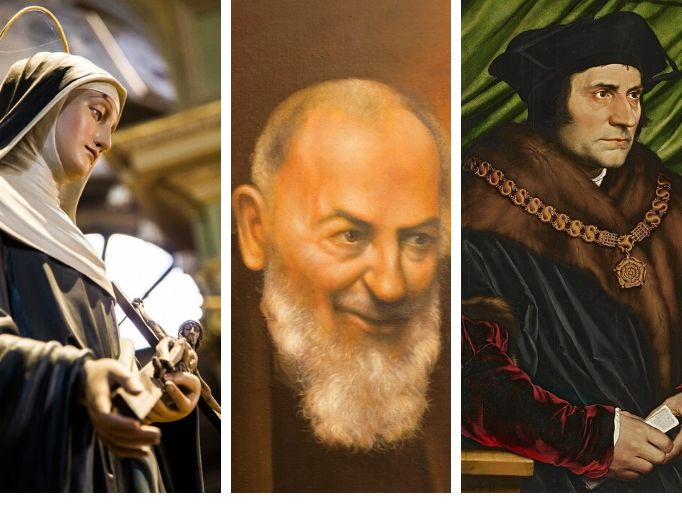 Listen to the Saints’ Timeless Words of Truth: Words of Hope From Holy Lives

Catherine of Siena’s words, many of them handed down as celebrated aphorisms, speak to us with significant gravity during this time, along with other holy words.

If God had spoken in the year 1347 to a certain resident of Siena, Italy, by the name of Mona Lapa Benincasa, he might have said to her: “You have been a great mother, having given birth to 22 children. You are now carrying twins. Be not dismayed, for the child you shall name Catherine will become a saint and a doctor of the Church.”

Catherine’s twin sister, Giovanna, died in infancy. Two years later, mama Lapa had another child whom she also named Giovanna. Mama Lapa, however, was slow to appreciate the special vocation that God had presented to Catherine.

God bestowed on St. Catherine a most critical role in restoring and revitalizing the spiritual health of the Church. Nobel Prize-winner Sigrid Undset states in her biography of the saint that Catherine “came to play a part in world politics, and to correct, advise and direct — sometimes even order and command — the Vicar of Christ on earth.” She played a significant role in convincing the last of seven French pontiffs, Pope Gregory XI, to leave Avignon and return to his rightful place in Rome.

Woman of Our Time

Two factors represent striking parallels to our current moment in history. St. Catherine came into the world at the outset of the plague in Siena. Moreover, the immorality and confusion the Church was suffering was widespread. She worked tirelessly for reform, and her hope for the Church never waned. She was utterly convinced that the strength and beauty of the Mystical Body could never diminish in its core, since it is God himself.

From her earliest childhood, Catherine began to see visions and practice extreme austerities. At the age of 7, she consecrated her virginity to Christ. She tended to the sick, served the poor, and labored for the conversion of sinners. All her contemporaries bore witness to her extraordinary personal charm.

Since she did not know how to write, she dictated the messages she received from God to her secretaries. She wrote letters to popes and sovereigns, rulers and leaders of armies. When she was 30, however, three years before her death, she miraculously learned how to write. A total of 382 of her letters have survived. Her contemporaries are united in asserting that St. Catherine dictated her letters while she was in a state of ecstasy.

In one of her messages, God said to her, “I shall send you to the popes and the leaders of my Church and to all Christians, for I choose to put the pride of the mighty to shame by the use of fragile tools.” This message brings to mind what God said to St. Paul: “My grace is sufficient for you, for my power is made perfect in your weakness” (2 Corinthians 12:10).

When St. Catherine was 23, she received a series of divine mysteries, including a vision of hell, purgatory and heaven. Her works, including her major treatise, The Dialogue of Divine Providence, rank among the classics of the Italian language. All her works were written in the beautiful Tuscan language of the 14th century. Scholars regard them as the mystical counterpart in pure prose to Dante’s Divine Comedy.

This remarkable saint’s words, many of them handed down as celebrated aphorisms, speak to us with significant gravity during this perilous time: “Nothing great is ever achieved without much enduring.” “Speak truth to power.” (Yes, St. Catherine coined that saying!) “He will provide the way and the means such as you could never have imagined. Leave it all to him; let go yourself; lose yourself on the cross, and you will find yourself entirely.”

She advocated reform of the clergy and advised people that repentance and renewal could be achieved through “total love of God.” Her words are as relevant today as they were more than six centuries ago.

Wisdom of the Saints

What do other saints have to say to us that might bring us comfort during this terrible pandemic? St. Pio of Pietrelcina (Padre Pio) says to us: “Pray, hope and don’t worry. Anxiety doesn’t help at all. Our merciful Lord will listen to your prayer.”

For the majority of people who are confined to their homes, St. Thomas More says: “The ordinary acts we practice every day at home are of more importance to the soul than their simplicity might suggest.”

If we are uncertain as to what we should do in this crisis, St. Catherine of Genoa says: “We must not wish anything other than what happens from moment to moment, all the while, however, exercising ourselves in goodness.”

St. Boniface offers us perspective when he advises: “Let’s stand fast in what is right and prepare our souls for trial. Let us wait upon God’s strengthening aid and say to him, ‘O Lord, you have been our refuge in all generations.’”

Finally, St. Angela Merici emphasizes the indispensable importance of faith: “Therefore, you must make a sound and firm decision to submit yourself to his will and, with a lively and steadfast faith, to receive from him what you have to do for love of him.”

As these words of the saints testify, truth is timeless — and wisdom does not have an expiration date. We are presently besieged by advice that ranges from the arbitrary to the ridiculous. The recommendations offered by governors, economists, scientists and Hollywood celebrities, though not entirely useless, are fraught with inconsistencies. Would it not be wise to listen to saints, whose main purpose in life is, as it always has been, to represent to all people in a clear and consistent fashion, the wisdom and the will of God?

“God may be dead insofar as theological concepts no longer direct political and economic affairs,” writes Catholic poet Phyllis McGinley in her invaluable book Saint-Watching, “but his heroes still interest the race.” We should now be “saint-listening.”

Spiritual heroes stand the test of time. We should be more attentive to them than to the assortment of often dubious characters who speak to us through the media.