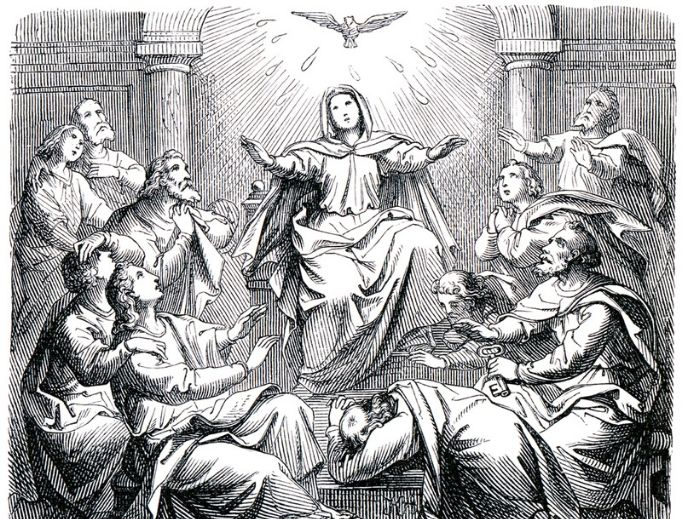 This might be a good year to intensify the devotional observance of the Pentecost Octave, despite its liturgical suppression in 1970.

Fifty years ago today, Pope St. Paul VI wept. So goes the well-circulated — but not confirmed — story about Pope Paul going to his private chapel for Holy Mass on the Monday after Pentecost. He was surprised to see green vestments for “Ordinary Time” laid out for him, rather than red vestments for the Octave of Pentecost.

A pontifical eyebrow was raised, and the ceremonial official on duty reported that the octave had been abolished. The disconcerted pontiff demanded to know who had done such a thing.

“You did, Holiness,” the reply came back. And the Holy Father wept.

Whether or not that story is true, the loss of the Pentecost Octave is a sadness. After 50 years, tears are of little use. It is better to understand why it is important and what can be done about it.

The Church’s public prayer includes both liturgical and devotional aspects. Some parts of the Tradition are a combination of both — like the “first novena” between Ascension Thursday and Pentecost Sunday or, more recently, the Divine Mercy novena, which begins on Good Friday and continues through the Easter Octave.

This might be a good year to intensify the devotional observance of the Pentecost Octave, despite its liturgical suppression in 1970. Interest has been growing in recent years, a positive consequence of the “mutual enrichment” desired by Benedict XVI between the ordinary and extraordinary forms of the Roman Rite. This year, when devotional life has largely replaced liturgical life, observing the Pentecost Octave with daily prayers and devotions to the Holy Spirit would seem most fitting.

Octaves have a venerable standing in the Church’s Tradition, extending an important feast for an entire week (eight days, with the feast itself counting as the first day) and often crowned with another feast on the eighth day, or “octave” day.

Christmas has an octave, beginning on Dec. 25 and ending on Jan. 1. That octave day was marked with another associated feast, first the Holy Name of Jesus and now the solemn Solemnity of Mary, Mother of God. Mary’s divine maternity is a suitable octave day for Christmas.

The Easter Octave is so important that no other feast days are permitted within it, and its octave day is another Sunday, now established as Divine Mercy Sunday.

Over time, additional feasts were elevated to octave status. For example, English Catholics might wonder why St. Thomas More, writing to his daughter Meg on the eve of his execution, refers to it as the “vigil of Peter.” He was executed on July 6, 1535, the octave day of the Solemnity of Sts. Peter and Paul, and it was considered an extension of that solemn apostolic feast.

By the 1950s, the calendar had 18(!) octaves, and some pruning was urgently needed. The tree barely survived though, as Venerable Pope Pius XII suppressed all of them, save for Christmas, Easter and Pentecost, the last of which survived only 15 more years.

There are hints of octaves still in the revised calendar. The octave day of the solemn Solemnity of the Assumption (Aug. 15) is the Queenship of Mary (Aug. 22); the Fourth and Fifth Glorious Mysteries of the Rosary clearly belong together. One might even identify hidden octaves, as between Sts. Mary Magdalene (July 22) and Martha (July 29), which likely arose from the (disputed) tradition that Mary Magdalene was Martha’s sister.

There remain remnants of the Pentecost Octave, which St. John Henry Newman called the “grandest” of the entire year in terms of its prayers in the Divine Office. The crowning of the suppressed octave remains Trinity Sunday. The Holy Spirit both enables us to profess that “Jesus is Lord” (1 Corinthians 12:3) and to cry out “Abba, Father” (Romans 8:15; Galatians 4:6), so it properly follows that the solemn Solemnity of the Most Holy Trinity follows the descent of the Holy Spirit.

There is extant a curious notation in the current Roman Missal, noting that in places where it is “customary or obligatory for the faithful” to attend Holy Mass on “Monday or even the Tuesday” after Pentecost, the Mass texts for Pentecost Sunday can be repeated. That’s a reference to Bavaria and Austria, where such days were civic holidays. In England it was called Whit Monday, an echo of the Easter Octave, particularly Easter Monday.

In 2018, Pope Francis established a new obligatory feast to be observed on the Monday after Pentecost: Mary, Mother of the Church. Some have objected that it now makes even a vestigial Pentecost Octave impossible, by removing the option of repeating the Mass of Pentecost on that day or even celebrating a votive Mass of the Holy Spirit. That is a weak objection, as “Mother of the Church” is a Marian title inextricably linked with the coming of the Holy Spirit. It is the Holy Spirit who overshadows Mary at the Annunciation in Nazareth, and Mary is present again at Pentecost, when the Spirit descends on the nascent Church.

One might suggest instead that, with Pentecost itself, the new Marian feast, Trinity Sunday and its vigil day, four of the eight days of the octave are already covered. Votive Masses of the Holy Spirit, if not impeded by an obligatory feast, could fill out the rest.

Pandemic time, when private prayer at home has become more regular and more creative, is an ideal time to do just that — novel means to recover an ancient tradition. Come, Holy Spirit!