Live These Final Days of Advent in the Spirit of Mary 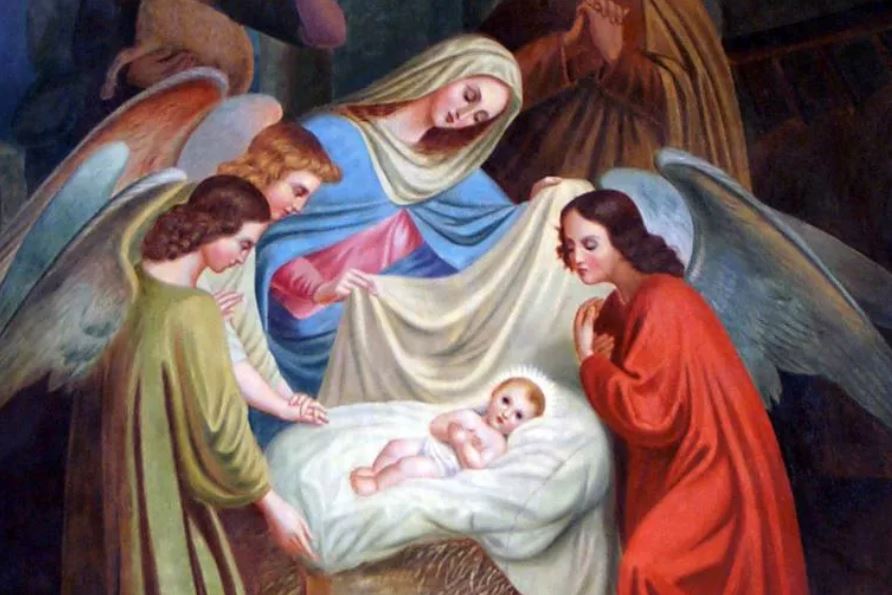 Live These Final Days of Advent in the Spirit of Mary

Advent is also the time to remember how our Blessed Mother brought the Light of the World to us, as recounted from Genesis through the Epistles.

When nature is at its darkest in our part of the world at the winter solstice, we anticipate the coming of light, when the light of the sun will begin to shorten the night. This became symbolic of the coming of Christ who declared himself to be the “Light of the World” (John 6:12). This is the focus of Advent in many forms of Christian worship.

Jesus goes on to share his mission with us, “You are the light of the world… Let your light shine before men, that they may see your good works and give glory to your Father who is in heaven” (Matthew 5:14-16).

Catholic and Orthodox Christians see in Mary the perfect example of being such a unique “co-worker” (1 Corinthians 3:9) with her Son. What good work did she do to give glory to our heavenly Father? She brought the Light of the World into the spiritual darkness of our world. This darkness was caused when Adam and Eve transferred their allegiance from God the Father to the demon and his false promises. From then on humankind has groped to find its proper spiritual equilibrium. Having only its distorted vision of things, humankind produced a multitude of false gods, false ways and false goals.

But God had not abandoned the crown of his earthly creation. At the devastation in Eden, he promised restoration, a Redeemer (Genesis 3:15) — a prelude to the Gospel of Salvation by a New Adam (1 Corinthians 15:45). He would restore the lost light. And how did he restore it? By becoming man, making his humanity the torch.

This is where Mary enters into the picture. Mankind was to participate in perfecting creation when God gave Adam and Eve the commission to care and master it (Genesis 2:15). Obviously, in his spiritual separation from God, he could no longer see the way to achieve that. That way would be revealed in Christ Jesus who declared, “I am the way… no one comes to the Father except through me” (John 8:12). This, of course, can mean “no one comes back to the Father” except through him because his mission, as Son, was basically that of restoration of our relationship with God the Father in the Holy Spirit.

It is interesting that, in the original account of creation, God only had to say “Let there be light” (Genesis 1:3) And there was light. Similarly, when Mary was asked to cooperate in the mission of Christ by becoming his mother, she simply said, “let it be done to me according to your word” (Luke 1:38) — “And the Word became flesh (John 1:14).” “And that life was the light of all mankind” (John 1:4). Her response to God’s word was like the key that opened the lock to a priceless spiritual treasure. That was her cooperation as co-worker with God.

Scripture tells us that Mary “treasured and pondered all these things in her heart” (Luke 2:19). She must have pondered the prophetic words of the Angel Gabriel to her at that decisive moment and throughout her pregnancy as the day of her delivery was approaching.

To ponder means to think carefully about something, while to treasure means to see great value in it. The message she received was that the long-awaited promise of a Messiah was to be fulfilled in her. Joseph was told that the child would save humankind from its sin, which was the work of the Messiah. This was verified by the Holy Spirit to the aged Simeon when the Child Jesus was brought by his parents to the Temple 40 days after his birth. Inspired by the Holy Spirit, he prophesied their child would be “… a light for revelation to the Gentiles” (Luke 2:32).

So, in the spirit of Mary, Catholic and Orthodox Christians treasure and ponder the mighty work that God accomplished in and through her.

Furthermore, her work of bringing that light through her holy motherhood did not terminate at Jesus’ birth. She made it public at the wedding feast in Cana, recorded in John 2:1-21. At her request, he manifested his glory for the first time by changing ordinary water into an exceptional wine. Thus, by means of this original manifestation of his power, “the first of his signs,” faith in him was enkindled in his disciples. Again, by means of her word, the light began to spread. So does his light spread through our fidelity to his word.

She must have also treasured and pondered his teaching, his suffering and death which she witnessed on Calvary. Acts 1:14, 2:11 emphasizes that, after Christ’s ascension into heaven, all “with one accord devoted themselves to prayer, together… with Mary the mother of Jesus… And there appeared to them tongues as of fire, distributed and resting on each one of them. And they were all filled with the Holy Spirit… telling [the mystified crowd]… the mighty works of God.”

Let us recall that this is not the first time that the Holy Spirit endowed Mary powerfully; that occurred at the announcement of her holy maternity. Therefore, by this new endowment of grace at Pentecost, her ability to treasure and ponder the mighty works of God from creation onward increased incredibly. She must have confided this to the Apostle John who took her to his home at the behest of Jesus as they stood at the foot of the Cross (John 19:27). Are we to doubt that John shared these treasures with the Church whose members would have been eager to know about Jesus as only his mother knew him?

In Philippians 3:17, St. Paul encourages Christians to imitate him and to “keep your eyes on those who live as we do.” This is why Catholic and Orthodox Christians do not put Mary away with the Christmas ornaments. But, following her example, they treasure and ponder that divine light emanating throughout her divine son’s life, death and resurrection.

St. Joseph the Worker was once out...