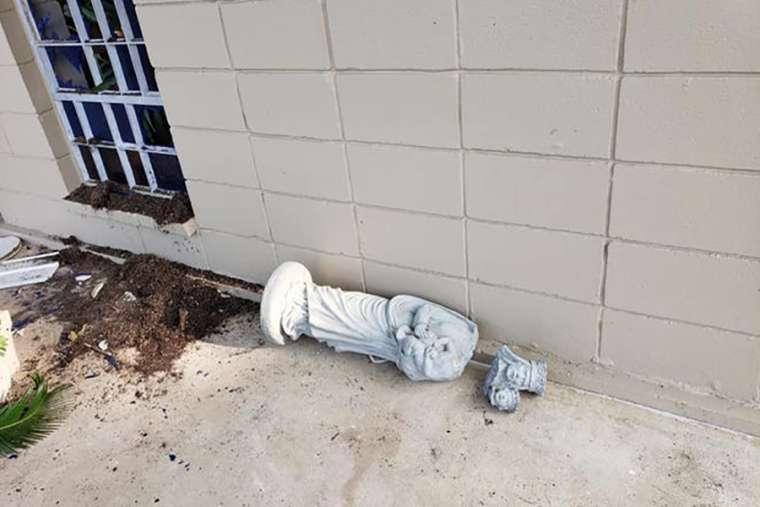 A man who went on an hours-long vandalism spree on Wednesday at Immaculate Heart of Mary Catholic Church in Tioga, Louisiana has been arrested and has confessed to the crime, according to local authorities.

During the act of vandalism, which lasted more than two hours, the assailant broke at least six windows, beat several metal doors, and broke numerous statues around the parish grounds.

Father Rickey Gremillion, the church’s pastor, told CNA Sept. 11 that the damage took place between 12:30-3:00 am Sept. 9. No one saw or heard anything while the vandalism was occurring, but the entire incident was captured on the church’s security cameras.

Gremillion discovered the damage upon arriving at the church for Mass later that morning.

“Obviously he never realized there were cameras watching him,” Gremillion said.

The Rapides Parish Sheriff’s Department announced Sept. 11 that they had arrested Chandler D. Johnson. Johnson, 23, has been charged with one count of criminal trespassing and one count of institutional vandalism.

Johnson, shirtless and wearing blue jeans, can be seen on video breaking numerous small flowerpots around the church and knocking over some larger concrete ones.

He beat one of the metal doors with a statue that he uprooted from outside the church, and beat another metal door with another statue. He also threw a statue at part of the church’s siding, and broke the heads of Mary and Jesus off of a concrete statue of Our Lady of Prompt Succor.

Johnson used a hard object to beat a hole in a large fiberglass statue of Mary that had been at the church for many years, the priest said.

The parish recently weathered Hurricane Laura with no major damage, Gremillion said, except for two of the church’s security cameras. The two functional cameras that remained were able to capture the act of vandalism on video.

Gremillion said he does not know of Johnson having any ties to the parish, or reason to target it.

Most of the glass will be replaced once the insurance company gives him the go-ahead, Gremillion said. A number of parishioners helped to clean up and board up the broken windows the morning the vandalism was discovered.

Gremillion said he is hoping to beef up the security system at the parish after the incident. Despite the incident being captured on video, the alarm system was not triggered.