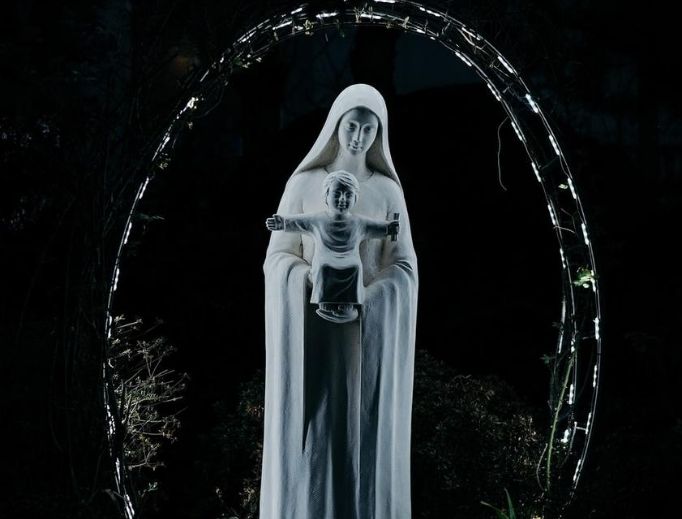 The Mother of God has not escaped the wrath of vandals. In a certain sense, rejecting Mary is a logical beginning for the rejection of God.

The CEO of Catholic Charities of eastern Washington, whose name we will not mention, made headlines recently with the following confession:

“I am a racist. … My Catholic Church, and my Catholic Charities organization, is racist. How could they not be? Our Catholic faith tradition is built on the premise that a baby, born in a manger in the Middle East, was a white baby.”

The remark is not so much a confession, but an accusation of racism. And it is built on the baseless assumption that racism is an inevitable quality of anyone who is of a particular color, which would include everyone. This gratuitous accusation would also apply to Mary, Mother of God. The CEO is not merely confessing, but attempting to destroy, and for no reason whatsoever.

Mary has also been indicted for being white. In another context, being white, of course, means being blameless — but in a racial context, can we even say that Mary is “white”? Her image on thetilmaof St. Juan Diego shows her to be Mexican. Is Our Lady of Guadalupe simply “white”? Other images of the Blessed Virgin show her to be Asian, African, Indian or Chinese. Mary is for everyone. It is blasphemous to reduce her to the color of her skin.

But Mary, even as the Black Madonna, does not escape the wrath of today’s vandals. On June 22, the mayor of Breda, a city in the southern Netherlands, condemned the vandals who defaced an image of Our Lady of Czestochowa (the Black Madonna), and painted the letters BLM (Black Lives Matter) beneath it.

Mayor Paul Depla of Breda said that the incident was “particularly sad for the Polish community, for which the monument is of great value.” It is, indeed, of great value, not only for the Poles, but also for the Dutch. It was erected in 1954 in thanksgiving for the city’s liberation from the Nazis.

Gen. Stanis?aw Maczek, the commander of the Polish First Armored Division, freed the city on Oct. 29, 1944. After the war, 40,000 inhabitants of Breda signed a petition to award Maczek honorary Dutch citizenship. When Maczek died in 1994, he was buried alongside his fallen soldiers at a cemetery in the city. The Black Madonna, a strikingly beautiful and colorful mosaic, is dedicated to the Polish soldiers of Gen. Maczek who freed the city from Nazi tyranny.

It is unlikely that one can dialogue with people who know little of history, less of religion and nothing of civility. Nonetheless, incidents such as the one in Breda provide an occasion for reminding people that Mary, the Mother of Our Savior, is for everyone.

The mother of Jesus was called Miriam, a common name for a Jewish woman of her time. It is a name that appears often in the writings of famed Jewish historian Titus Flavius Josephus. Miriam was the name of the biblical sister of Moses and Aaron. David Flusser, a Jewish author, has made the following comment concerning the name Miriam:

“It is wonderful that the name at that time was experiencing such extensive usage. It was providential that the mother of Jesus bore the same name as many Jewish women; it is a symbol of her connection with them. It is also fortunate for the reason that, as we know, it indicated Jesus’ bond with his people” (Mary:Images of the Mother of Jesus in Jewish and Christian Perspective).

Another indication of the universality of Mary comes from the pen of the Protestant novelist Nathaniel Hawthorne:

“I have always envied the Catholics that sweet, sacred, Virgin Mother who stands between them and the Deity, intercepting somewhat his awful splendor, but permitting his love to stream on the worshipper more intelligibly through the medium of a woman’s tenderness.”

Mary’s womanly tenderness makes her more accessible to people. She is Mother to everyone. As proof of this, she has appeared to her children in Mexico, Portugal, France, Ireland, Poland, Lithuania, Italy, Rwanda, Japan, Vietnam, Peru, Ecuador, Belgium, the United States and the Czech Republic. This is an incomplete list, and she has appeared several times in a given country.

Mary would be merciful toward those who defaced her image. As St. Anselm has said, Mary “was made the Mother of God more for sinners than for the just.” This is most fitting, since Christ said that he came not to save the just but to call sinners to repent. Mary leads us to God, just as she gave God to the world. She is, in the words of Capuchin Father Raniero Cantalamessa, “God in transparency. In her and in her life, God shines through” (Mary, Mirror of the Church).

Those who strike against Mary are at the same time striking against God. Mary gave birth to God and thus was indispensable in his coming into the world. In a certain sense, rejecting Mary is a logical beginning for the rejection of God.

The English poet Coventry Patmore remarked that Mary is “Our only Saviour from an abstract Christ.” Mary made it easier to know God and to worship him. She endowed him with flesh so that he could commune with others as a flesh-and-blood person. Flesh-and-blood humanity is a universal description of the human being. In this regard, she also manifests her universality.

Henry Adams, the great-grandson of America’s second president, said of the Blessed Virgin, “In the bankruptcy of reason, she alone was real” (Mont Saint Michel and Chartres). We are witnessing at the moment a situation that can rightly be called a “bankruptcy of reason.”

We need Mary now, perhaps more than at any time since she gave birth to our Savior.