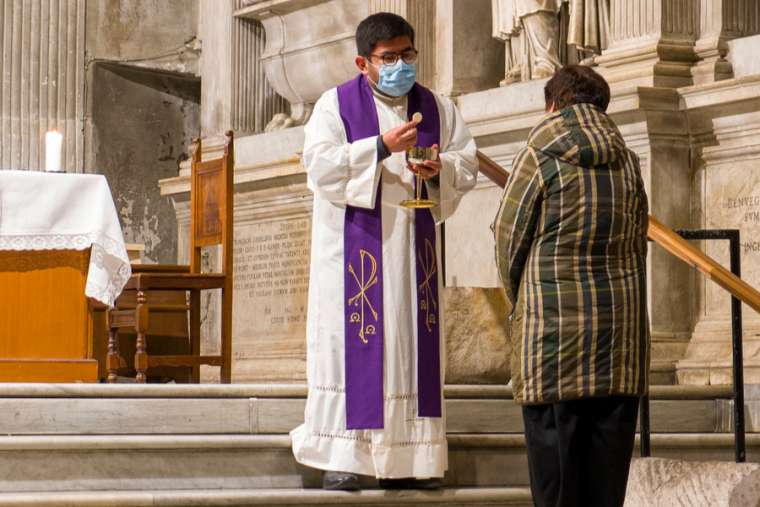 An executive order issued Tuesday in Maryland’s Howard County outlines public health rules under which churches may reopen. The order prohibits the distribution and consumption of any food or drink as part of any religious service, effectively outlawing the distribution of Communion and the celebration of the Mass.

The consumption of the consecrated species at Mass, at least by the celebrant, is an integral part of the Eucharistic rite. Rules prohibiting even the celebrating priest from receiving the Eucharist would ban the licit celebration of Mass by any priest.

The Howard County public affairs office has not yet responded to questions from CNA regarding how the rule aligns with First Amendment religious freedom and free exercise rights.

In contrast to the 10-person limit for churches, establishments listed in the order that do not host religious services are permitted to operate at 50% capacity.

The order also states that “singing is permitted, but not recommended,” and that only the person leading the service or a choir may sing. Those who are singing without masks should, per the order, “maintain a 12-foot distance from other persons, including religious leaders, other singers, or the congregation.”

The Archdiocese of Baltimore, whose territory includes Howard County, did not respond to requests for comment on the Howard County executive order by the time of posting.

The archdiocese announced its own phased reopening plans on Tuesday. While some of the policies outlined in the archdiocese’s plans are in line with Executive Order 2020-09, there is no prohibition on the distribution of food or beverages before, after, or during Mass.

The Archdiocese of Baltimore’s reopening plans require that communicants observe social distancing while in line for communion, and is discouraging reception on the tongue–but the archdiocese has not instructed parishes to place any other restrictions on the reception of communion, apart from ordinary canonical norms.

In Phase I of the archdiocese’s reopening plan, churches will be open for private prayer, but Mass will still be celebrated without a congregation. In Phase II, which is expected to begin in some areas the weekend of May 30-31, churches may open to socially-distanced congregations up to one-third of the seating capacity.

The Department of Justice has recently issued a number of letters concerning cases of state and local public health orders which affect churches and houses of worship. In the last week, the department sent letters to the governors of California and Nevada, emphasizing the need to respect religious freedoms while working to combat the coronavirus pandemic.

“Simply put, there is no pandemic exception to the U.S. Constitution and its Bill of Rights,” Eric S. Dreiband, head of the U.S. Department of Justice’s Civil Rights Division, said in a May 19 letter to California Governor Gavin Newsom.

The DOJ has also filed statements of interest in cases involving conflicts between churches and local authorities, including a lawsuit against the Mayor of Greenville, Mississippi, after members of the Temple Baptist Church were fined $500 for attending a service in their cars in the church’s parking lot. The mayor later rescinded the fines and amended the city’s stay at home order.