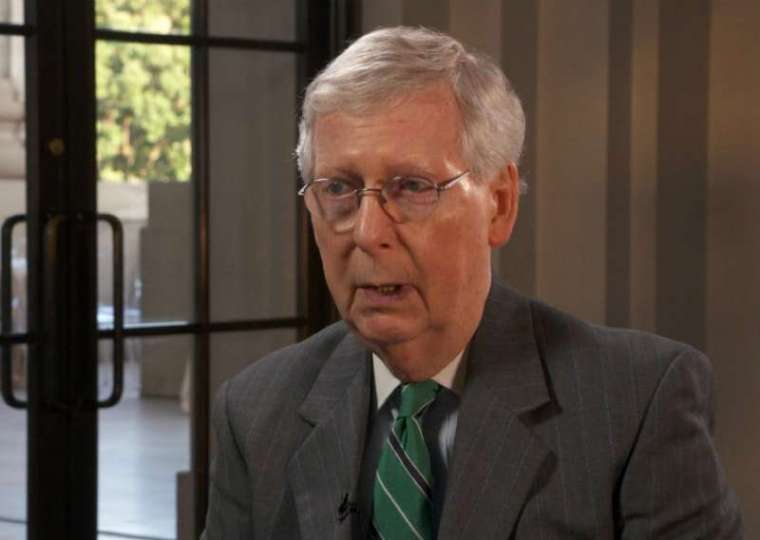 Senate Majority Leader Mitch McConnell said Friday night that after the death of Supreme Court Justice Ruth Bader Ginsburg, a Trump Supreme Court nominee will be voted on for confirmation by the United States Senate.

In a statement released Friday night, McConnell said that “President Trump’s nominee will receive a vote on the floor of the United States Senate.”

McConnell elaborated on that decision, saying that “in the last midterm election before Justice Scalia’s death in 2016, Americans elected a Republican Senate majority because we pledged to check and balance the last days of a lame-duck president’s second term. We kept our promise. Since the 1880s, no Senate has confirmed an opposite-party president’s Supreme Court nominee in a presidential election year.”

“By contrast, Americans reelected our majority in 2016 and expanded it in 2018 because we pledged to work with President Trump and support his agenda, particularly his outstanding appointments to the federal judiciary, we will keep our promise,” McConnell said.

In March 2016, President Barack Obama nominated Judge Merrick Garland to fill the Supreme Court seat that had been held by Justice Antonin Scalia. Senate Republicans did not consider Garland’s nomination, saying that it would be more appropriate to wait until after the November election to fill the Court vacancy.

After his 2017 inauguration, Trump appointed Neil Gorsuch to fill Scalia’s seat, and the nominee was confirmed by the senate.

Senate Democrats have pointed to that 2016 decision in response to McConnell’s Sept. 18 statement.

A Trump appointment could tip the balance of the court to a 6-3 conservative majority, which Republicans have said would lead to the court overturning the 1973Roe v. Wadedecision that ensured legal protection for abortion across the U.S.

Trump last week expanded a list of potential judicial nominees under his consideration. At a presidential debate in October 2016, Trump pledged to appoint justices who would overturnRoe v. Wade.In addition to appointing Gorsuch, in 2018 Trump nominated Brett Kavanaugh to replace Justice Anthony Kennedy, who was retiring.

Among the names on the new list are Stewart Kyle Duncan of the Fifth Circuit Court of Appeals—the former general counsel for the religious freedom firm Becket—and Peter Phipps of the Third Circuit Court of Appeals, whose membership in the Knights of Columbus was the subject of tough questions by Sen. Kamala Harris (D-Calif.) when he was a district court nominee in 2018.

Amy Coney Barrett of the Seventh Circuit court, a former professor at the University of Notre Dame and a Catholic mother of seven, was on the existing White House list of nominees.

Pro-life leaders hailed last’s week announcement. Jeanne Mancini, president of March for Life, said the appointment of pro-life judges to federal courts was “one of President Trump’s greatest accomplishments” of his first term, and that “[w]e anticipate that process will continue in a second term.”

Marjorie Dannenfelser, president of the Susan B. Anthony List and co-chair of the Trump campaign’s pro-life outreach said that his list “is filled with all-stars.”

in the first major abortion case before the court during Trump’s presidency, the court struck down Louisiana’s safety regulations of abortion clinics, a blow to pro-life efforts at the state level. While Gorsuch and Kavanaugh ruled in the minority on the decision, Chief Justice John Roberts sided with the Court’s four liberal justices against the law.

Ginsburg, who served on the court for more than 27 years, died of pancreatic cancer Sept. 18. She was 87. President Bill Clinton appointed Ginsburg to the Supreme Court in 1993. Ginsburg had previously been an appeals court judge.