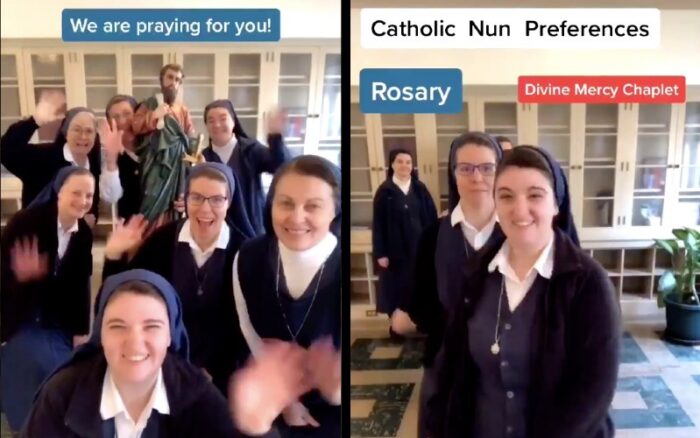 This is so cute!

Sister Bethany Davis, FSP, of the Daughters of St. Paul (aka, the Media Nuns) published a video to TikTok that she says went viral on the platform.

The video, which generated more than one million views on TikTok, features several of the order’s sisters demonstrating their version of the current trend, “preferences”.

Each sister chooses their preferred prayer, liturgical season, sweater, and saint, along to the Run DMC song “It’s Tricky”. The sisters conclude the video waving at the camera with the caption, “We’re praying for you!”

Sr. Bethany re-posted the video to Twitter, which generated almost 150,000 views as of this writing.

We did this TikTok a few days ago and it has over a million views!
😱🤩 pic.twitter.com/UmdCzACPQz

“I saw the trend pop up on TikTok and thought, ‘We could make that super [for] Daughters of St. Paul!’” Sr. Bethany told ChurchPOP.

“Our mission in the Church is to bring Jesus to the world by using the most modern and efficacious forms of media,” she added. “We are still trying things and figuring out how best to utilize this platform. There is so much potential on TikTok, so we want to be there.”

What did you think of the video?