Meet the Contemplatives Known as ‘the Heavy Artillery’ 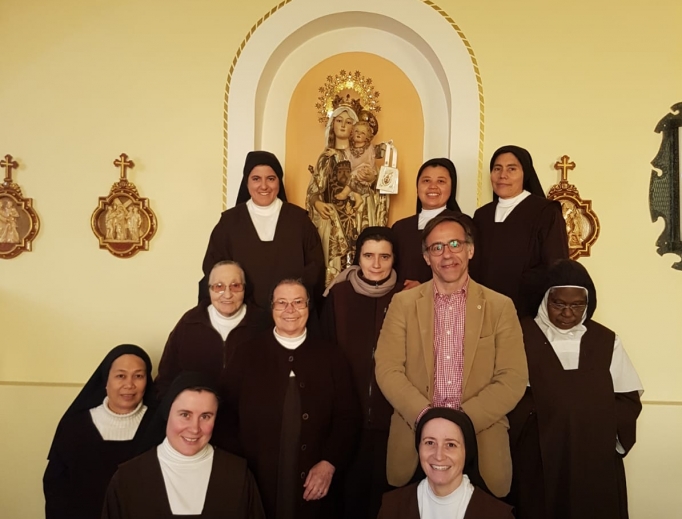 Meet the Contemplatives Known as ‘the Heavy Artillery’

The Tangiers Carmel’s surprising link to the financial heart of London.

LONDON — There is a community of enclosed Carmelite nuns who are gaining a reputation in London.

The community, the Carmelite Sisters in Tangiers, lives in Morocco, however, many miles from the British capital. So how have these contemplatives attracted a devoted and grateful group of supporters and friends in London, centered mainly in the capital’s business district known simply as: “The City”?

In recent years, bankers, stockbrokers and City lawyers have started talking of these Carmelite nuns as “the heavy artillery.”

The nuns received this nickname because many prayer requests — often-desperate ones for desperate situations, frequently involving illness — have gone to the nuns, sometimes with spectacular success. Many of these London requests for prayers come from Catholics, both lapsed and practicing; others, however, come from non-Catholics. What these Londoners all now have in common is an immense gratitude to these women religious for praying on behalf of complete strangers in their hour of need.

So who are these nuns, and how did this connection with London come about?

The answer to the second part of the question is straightforward. Antonio Irastorza is a City lawyer with offices just off Finsbury Square in the heart of London’s financial quarter. He encountered the nuns by accident. He told the Register, “I came across them in January 2013, when I was in southern Spain. I crossed to Tangiers from there on the ferry, but I couldn’t come back because my ferryboat sank due to very strong winds! One of the only two places to hear Mass in Tangiers is at the Carmel, so I went to Mass there.”

He discovered that the Carmelite sisters were living in abject poverty and was impressed by their Christian witness in an Islamic country. “I had a chat with Mother Prioress through the grill and asked if I could keep in contact with the Carmel via email,” he explained.

From then on, Irastorza did just that; he also began forwarding to the sisters many prayer requests. “Many people have received favors through the prayers of the sisters, whether these be about work or for family members. One of the people who received a favor through the sisters described their prayer as akin to the military idea of ‘heavy artillery.’” The growing reputation of this “heavy artillery” soon spread throughout London’s financial quarter.

The Carmel in Tangiers is not the only such monastery in the Islamic world. There is a Carmel in Syria and in Egypt. “But,” as Mother Prioress Julia de San Jose of the Tangier Carmel told the Register, “In those places there are also native Christian families who are living there. In Morocco, there are no Moroccan Christians living here.”

The story of how the Carmel came to be starts in 1923, when Mother Teresa of the Holy Family from the monastery of San José, Avila, Spain, was sent to Segovia. It was there she consulted the superiors of her religious order about the possibility of founding a Carmelite monastery in Africa. Eventually, this idea was approved. Mother Teresa arrived in Tangiers on January 23, 1933, with the Discalced Carmelites’ Monastery of the Holy Family and St. Thérèse of the Child Jesus formally established on Dec. 13, 1934.

Today, there is a monastic community there of nine sisters: two from Spain and one sister each from the following countries: Portugal, Italy, Ecuador, Colombia, Liberia, the Philippines and Chile.

“The day of a Carmelite nun is balanced with solitude and community life, recreation and silence, work and prayers,” says Mother Julia de San Jose.

The horarium of the nuns is as follows:

7am Silent prayer, for one hour

8am Holy Mass, followed by thanksgiving, and mid-morning prayer

9:10am-12:45pm Work period within the monastery followed by midday prayer

6:30pm Evening Prayer, then one hour of silent prayer

Followed by the “Grand Silence”

Mother Julia de San Jose summed up the life of the Tangiers Carmel as follows: “Like our sisters in other Carmels, we help one another to live a life in union with Christ. We sing praises to the Lord; we try to live in silence, meditating on the word of God every day; we do our work in imitation of the life of the Holy Family in Nazareth; and we present every day to the Lord the joys and sorrows, anguish and hope of the Church and of all men.”

With little or no Catholic community to offer material aid, the Tangiers Carmel supports itself by selling homemade cookies, jams and cakes. “We also make religious articles like rosaries and key rings. We have a hostel where we receive visiting groups during the summer,” said Mother Julia de San Jose. The Carmel also gratefully receives alms, not least from their devoted band of beneficiaries in London.

Recently, the sisters lost their roof. Quite literally, the roof of the monastery blew off during a hurricane. Quickly, they needed to find £50,000 ($75,000) to replace it. This time, the sisters prayed for their own need. They also told Irastorza of the monastery’s plight. In turn, he put the word around the City of London. Within days, the sisters had the money needed to replace the roof. “They have never asked for money,” said Irastorza, “but over the years, with the help of many, we have raised over 1 million euros for the sisters. It’s only when I visit them that I see what it is they need: repairs to the Carmel, the chapel, the roof, or when one of the sisters needs medical attention.”

Irastorza says the connection between the alms given to the sisters by many of his friends and colleagues in London is a simple one — the sisters have prayed for his friends and colleagues. Sometimes this has been with incredible results, and, therefore, a reservoir of goodwill has built up over the years for the Carmelite Sisters in Tangiers. This goodwill is evidenced in the financial contributions the sisters have received in their hour of need.

At Peace With Neighbors

How do local people feel about a Christian monastery in their midst? This is especially a concern, given the recent upheavals across the Islamic World. Mother Julia de San Jose has no fears about the Carmel’s relationship with their neighbors, though: “We are at peace with the people around us. We respect each other. In our experience, we have been respected in our 80 years here in this country.”

Still, Morocco is next door to Algeria, which, in recent times, has witnessed the slaying of the Cistercian monks, now known as the Atlas Martyrs. The sisters at Tangiers knew one of those martyr-monks, the Prior Christian de Chergé (now a “Blessed”). On occasion he had celebrated Mass in the chapel at the Tangiers Carmel.

That fact alone is a reminder of the threat with which all Christians in North Africa live at present. Nevertheless, the Tangiers Carmel continues witnessing to God’s love and mercy. Trusting in divine Providence, the sisters continue to pray for anyone who asks this of them, using their spiritual “heavy artillery” to lighten the load of many in London and across the world.

“The sisters never talk about themselves,” observed Irastorza.“All they are interested in is helping other people by and through prayer. Their witness has been a great lesson to me in serenity and abandonment to God’s will.”

The life of a hermit: A glimpse in...