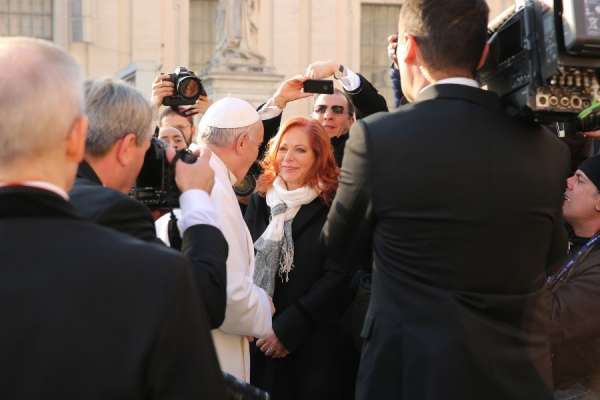 A Mexican broadcaster said Thursday that the Vatican held back footage from a 2019 interview that it conducted with Pope Francis, in which the pope called for the passage of civil union laws for same-sex couples. That footage appears in a documentary on Pope Francis released this week, but the Vatican has not yet explained the situation.

A spokesman for Televisa told the Washington Post Oct. 22 that “Someone at the Vatican gave us the part that we did broadcast, and later they gave the rest of the material to someone else.”

The missing footage appeared in the documentary “Francesco,” directed by Evgeny Afineevsky, which premiered Wednesday in Rome, prompting a global media firestorm.

The Vatican has not addressed why the comments that were excised from the interview it sent to Televisa later appeared in the documentary.

Teresa Villa, a spokeswoman for Televisa, confirmed to the New York Times on Thursday that the pope made the statement about civil unions in an interview with the broadcaster’s Vatican correspondent, Valentina Alazraki, which took place last year. The interview was recorded with Vatican-owned cameras, and the network was given footage of the interview — but apparently not all footage — after the interview.

While Alazraki’s interview was released by Televisa June 1, 2019, Pope Francis’ comments on civil union legislation were not included in the published version, and had not previously been seen by the public.

According to the Times, two other people close to the company, who asked not to be identified, said that the interview was filmed with Vatican cameras and the Vatican had control over the footage. The two sources also said that Francis’ comments on same-sex unions were cut from the version of the interview footage Televisa received from the Vatican.

The interview Pope Francis gave to Televisa appeared to have been shot in the same place, with the same lighting and the same appearance as the pope’s comments on civil unions, which drew questions this week about the statement’s origin, with conflicting reports coming from different sources.

Afineevsky, who said he was given access to Vatican archival video footage during the documentary’s years-long production, told CNA and other journalists on Wednesday that Pope Francis’ comment in support of legalizing same sex civil unions was made during an interview the director himself conducted with Pope Francis. Televisa’s statement and analysis of the footage contrast that account.

Fr. Antonio Spadaro, SJ, director of the Jesuit magazine La Civiltà Cattolica, said on Wednesday evening “there is nothing new” in the pope’s remarks on civil unions.

In a video released by Tv2000, a media apostolate of the Italian bishops’ conference, Spadaro said that “the director of the film ‘Francesco’ compiles a series of interviews that have been conducted with Pope Francis over time, giving a great summary of his pontificate and the value of his travels.”

“Among other things, there are various passages taken from an interview with Valentina Alazraki, a Mexican journalist, and within that interview Pope Francis speaks of a right to the legal protection of homosexual couples but without in any way affecting doctrine,” Spadaro said.

“This is an interview given a long time ago that has already been received by the press,” Spadaro added, apparently unaware that the pope’s remarks on civil unions had not previously been released.

Tv2000 is not affiliated with the Vatican, and Spadaro is not a Vatican spokesman.

Also on Wednesday, the priest told the Associated Press that “there’s nothing new because it’s a part of that interview,” adding that “it seems strange that you don’t remember.”

Other aspects of the “Francesco” documentary have been called into question by journalists in recent days.

On Thursday, CNA and other media outlets reported that other remarks that Pope Francis made about people who identify as LGBT had been spliced together out of sequence from excerpts of the Televisa interview, making their meaning less clear than the pope’s initial remarks.

The Vatican has not responded to questions or requests from media about Pope Francis’ expression of support for legal same-sex civil unions.