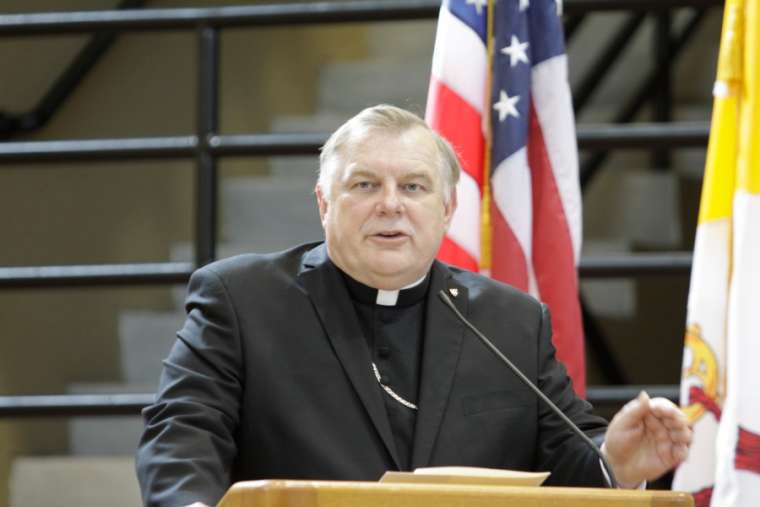 “The Constitution specifically says there should be ‘no religious test for office,’” Archbishop Thomas Wenski of Miami told CNA on Thursday of Barrett, whose confirmation hearings for the Supreme Court are set to begin Oct. 12 before the Senate Judiciary Committee.

Those who are “raising the issue” of Barrett’s religious beliefs during consideration of her nomination to the Supreme Court, he said, “are not honoring the principals of our Constitution and thereby contribute to undermining the rule of law in our nation.”

Barrett, a judge on the Seventh Circuit appeals court and a Catholic mother of seven, is also a former Notre Dame law professor and member of the ecumenical group People of Praise.

Her religious beliefs have received scrutiny in the press and by Democratic senators.

This week, The Guardian and the Washington Post reported that Barrett, while a law student, resided at the home of the co-founder of People of Praise, a charismatic ecumenical group founded in 1971 in South Bend, Indiana.

The Guardian called the group “secretive” and said it “has been criticized for dominating the lives of its members and subjugating women.”

On Tuesday, the Washington Post noted Barrett’s position of “handmaid” in People of Praise. The paper interviewed former members of the group who alleged that women held lesser positions in the group to men, and that wives were expected to cede decision-making in the home to husbands.

Other recent reports on Barrett’s membership in People of Praise in Newsweek and Reuters—since corrected—either connected or asked if a connection existed between the group, its discontinued use of the term “handmaiden,” and the 1985 dystopian novel and later TV series “The Handmaid’s Tale.”

The group’s use of the term “handmaiden,” however, was rooted in Scripture—and Archbishop Wenski spoke out against the secular appropriation of the word.

“The word ‘Handmaiden’ – ‘ancilla’ in Latin – has deep biblical roots and in the New Testament refers especially to Mary, the Mother of Jesus, who declares herself to be the ‘handmaiden of the Lord’,” Wenski said.

“That a novelist would ‘culturally appropriate’ this word to use in a distorted way to promote an ideology hostile to the Judeo-Christian patrimony of Western civilization only points to the growing biblical illiteracy of our elites and is indeed very disappointing,” he said.

In 2017, during Barrett’s confirmation hearings for the appeals court, Sen. Dianne Feinstein (D-Calif.) said she was concerned that Barrett’s religious views on abortion and other issues might influence her rulings on the court.

Feinstein told Barrett that “when you read your speeches, the conclusion one draws is that the dogma lives loudly within you. And that’s of concern.” The senator accused Barrett of having “a long history of believing that your religious beliefs should prevail” over the law.

Some Democratic senators have continued to warn that Barrett’s Catholic beliefs in issues such as abortion and assisted reproductive technology could influence her decision-making on the bench.

“Her faith is irrelevant,” Sen. Mazie Hirono (D-Hawaii) said of Barrett at a Sept. 30 press conference. “What the real issue her is whether her closely-held views can be separated from her ability to make objective, fair decisions with a lifetime appointment.”

“I fear that, if confirmed to the nation’s highest court, Judge Barrett would be unable to resist the temptation of overturning decades of judicial precedent in an effort to force every American family to adhere to her individual moral code,” Sen. Tammy Duckworth said in an Oct. 2 “dear colleague” letter.

Duckworth noted that Barrett signed on to a 2006 letter by St. Joseph County Right to Life that supported the right to life “from fertilization.” The group, Duckworth said, opposes in vitro fertilization (IVF), the same treatment Duckworth used to have her children.

“I fear that if a case involving ART [Assisted Reproductive Technology] were to be brought before the bench, families like mine would not be able to trust that her [Barrett’s] opinions would be based on facts, laws and the Constitution rather than swayed by her personal beliefs,” Duckworth said.

On Wednesday,Senate Majority Leader Mitch McConnell (R-Ky.) said that“It is the definition of discrimination to assert that Justice Barrett’s particular faith makes her uniquely unqualified for this promotion,”

McConnell condemned the suggestions “that Judge Barrett is too Christian, or the wrong kind of Christian, to be a good judge.”

“Every Supreme Court Justice in history has possessed personal views,” he said.

Pence and Harris clash on abortion...