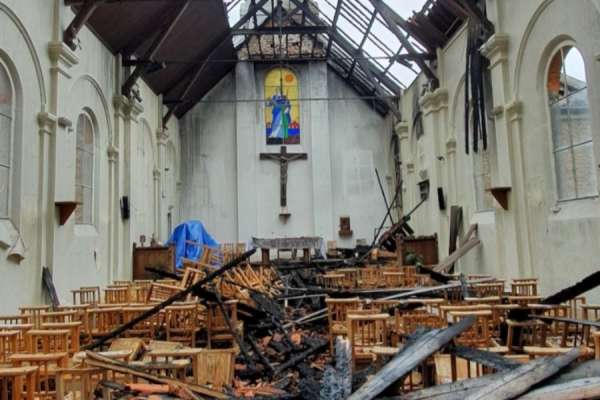 Rome Newsroom, Nov 17, 2020 / 02:00 pm (CNA).- The Organization for Security and Cooperation in Europe published data Monday documenting more than 500 hate crimes against Christians in Europe in 2019.

Incidents included attacks against Catholic priests, arson attacks on Catholic churches, the destruction of images of the Virgin Mary, vandalism of a pregnancy counseling center, and the theft of consecrated Eucharistic hosts from tabernacles.

France had the most hate crimes against Christians, with 144 incidents in 2019, the majority occurring against Catholic churches. The OSCE also reported 81 incidents in Germany, 75 in Spain, and 70 in Italy.

The information was published Nov. 16 to mark the International Day for Tolerance. The OSCE also released data on hate crimes driven by anti-Semitism, racism, bias based on sexual orientation and other categories.

Here is a breakdown of some of the hate crimes committed against Christians documented by OSCE:

In France and Spain, there were multiple incidents in which tabernacles were broken into and consecrated hosts stolen. In Feb. 2019, almost 300 consecrated hosts and three chalices were stolen from a church in France. There were 14 incidents in France involving a tabernacle being forced open and the hosts either being stolen, destroyed, or scattered on the floor. In June 2019, the tabernacle in one church was set on fire.

Attacks and threats against priests

In Poland, there were four incidents that the OSCE classified as violent attacks against people perpetrated against priests. A priest was stabbed in the chest with a knife when entering church before Mass in June 2019. Another priest was beaten by a group when he intervened in their attempt to desecrate his church in Nov. 2019. Two other priests were assaulted in July and August 2019 respectively.

In Spain, a priest was the target of an attempted physical assault while he was offering Mass in April 2019. Another priest was punched in the face as perpetrators threatened to burn down his church in Sept. 2019. An Indian priest living in Spain received death threats and racist insults in June 2019 for which the perpetrator was charged with a hate crime.

A priest in Italy was also subjected to insults and threats due to his work in support of migrants.

A shrine in Spain dedicated to the Virgin Mary was defecated in. The church’s walls and a statue of Jesus Christ were smeared with excrement.

There were at least 20 arson attacks against churches in France recorded in the data for 2019. In Dec. 2019, the nave of a church was set on fire during Sunday Mass. In other incidents, confessionals and altars were set on fire. A similar number of arson attacks against Christian churches in Germany were documented in 2019, and six arson incidents were also documented in Italy.

In the United Kingdom, there were eight arson attacks against Christian churches, including at least one Catholic church.

A convent in Spain was the target of arson a few days after it was vandalized with paint in Sept. 2019. A statue of Jesus was set on fire in November and a church’s altar was set alight twice in two weeks among other arson attacks.

The participants in the Catholic bishops’ conference in Spain also received numerous threats of an arson attack in 2019.

The ethics of Moderna's coron...