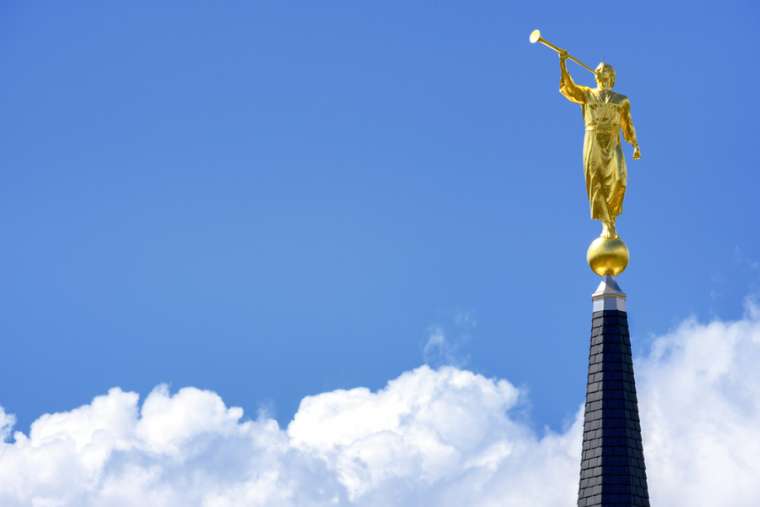 A Catholic publisher has apologized for using a Mormon image on the cover of two of its 2021 publications. Oregon Catholic Press said the use of the image of the Mormon figure of Moroni was a mistake, and the company believed it to be a general image of an angel. The artist – a Catholic who abandoned the faith for Mormonism – had listed the image as of Moroni on his ownsocial media account.

The painting uses Santangelo’s distinct style of “sacrocubism” and depicts an angel standing on a golden sphere, blowing a horn and holding a box or book of gold. These arestaples of images of the figure Moroni, a character in the Mormon religion, statues of whom feature on the spires of Mormon temples.

In a statement published to their Facebook page Aug. 24, Oregon Catholic Press explained that “Great care goes into choosing the art for our missals.”

“The sounding of the trumpet at the last is a strong traditional Christian image. We chose this angel because he’s holding a trumpet and what looks like the book that will be opened at the last,” said Oregon Catholic Press.

The publishing company stated that the artist, Santangeo, “did not offer us images that were assigned to a specific angel” and that he was aware Oregon Catholic Press was a Catholic company.

“At the same time, it is reasonable that those who hold the Mormon faith might see this same image as the casket containing the golden tablets of their faith,” they said.

On his own website and social media accounts, Santangelo has identified the image as of Moroni.

“We, of course, apologize for any misunderstanding that this may have caused,” said the statement.

“We saw a beautiful image of an angel, and nothing more. We commit to redoubling our efforts in vetting missal art in the future, and hope that this explanation helps our partners in ministry better understand why we chose this particular art piece for the 2021 Music Issue cover.”

Cocco Santangelo, the painter of the cover art, was raised Catholic in Argentina. He, along with his wife, underwent Mormon initiation rites in 1962. The pair were among the first Mormons in Argentina.

Although Oregon Catholic Press said Santangelo’s image was not of any specific angelic figure, “Angel VIII,” which was painted in 2017, is virtually identical to a 2018 painting titled “Angel Moroni.” Additionally, the 12th entry in Santangelo’s 2017 “Angel” collection, which is a series of paintings of an angel with a horn and box, is labeled on his website as “Angel M XII.”

“Most of the angels in this collection are in fact different versions of the angel known as Moroni, who lived in the American continent hundreds of years ago as the last prophet that wrote and kept the sacred records of the Nephite nation,” said the Instagram caption.

“He is the angel that appeared to Joseph Smith and directed him to the golden plates that were translated and we know now as The Book of Mormon.”

OCP’s use of the image on the cover of “Respond & Acclaim” was first posted online on Aug. 10, but the unusual choice of cover art for a Catholic worship aid did not draw widespread attention until Monday, Aug. 24.

OCP did not respond to requests for comment by CNA.

Fr. Robert Badger, a priest of the Diocese of Gallup, who was raised as a Mormon before converting to Catholicism in 1993 at the age of 19, was one of the first to note that the image on the missals strongly resembles depictions of Angel Moroni.

The cover art, said Badger, “offers me an excellent reason to sever our relationships with Oregon Catholic Press.”

After OCP posted their statement to Facebook, Badger, whose family includes theoriginal membersof the LDS Church, tweeted that he “did not buy” the explanation.

Badger said on Monday evening “I am descended from Mormon pioneers and grew up in the Mormon church. It’s definitely the angel Moroni, the same one that adorns most of the Mormon temples around the world.”

The LDS Churchteachesthat the Angel Moroni first appeared to Joseph Smith on September 21, 1823, and informed him that there was an “ancient record engraved on plates” that was buried near his house. Over the next six years, per LDS doctine, Moroni repeatedly appeared to Smith and assisted with the location and translation of these plates. The contents of the plates would become the Book of Mormon, the LDS Church teaches.

A statue of the Angel Moroni is featured on the spire of many LDS temples as a tribute to his status as the “messenger of the restoration.” The LDS Church teaches that the Angel Moroni was the key figure in “restoring” the true gospel.

The controversy over the use of a Mormon image for two of its publications comes a week after a federal court ruled an antitrust lawsuit against OCP could continue.

On Aug. 18, a federal judge in Indiana refused to dismiss a suit against OCP, brought by several smaller Catholic publishers, accusing OCP of monopolistic practices aimed at driving them out of business.

U.S. District Judge Robert L. Miller Jr. issued an order denying a motion to dismiss by OCP, ruling that the suit can continue.

Lawyer for the claimants Donald J. Schmid, told Law360 last week that OCP has used its position to try to drive other Catholic music publishers out of business and reduce competition, calling the publisher “a monopolist.”

The suit includes allegations that OCP deliberately instructed its composers to use the same song titles as its rivals’ best-selling works in an effort to confuse customers.

OCP has argued that the suit, filed in August 2019, is part of a decade-long attempt by rivals “to gain unfettered access” to its back catalogue.

Per Oregon Catholic Press’ website, “Respond & Acclaim” is an “annual collection of psalms and Gospel Acclamations from Owen Alstott,” “Today’s Missal,” which is published three times per year, texts of Sunday and weekday liturgies together with music published by OCP.