Mother Cabrini gets a new statue in New York City 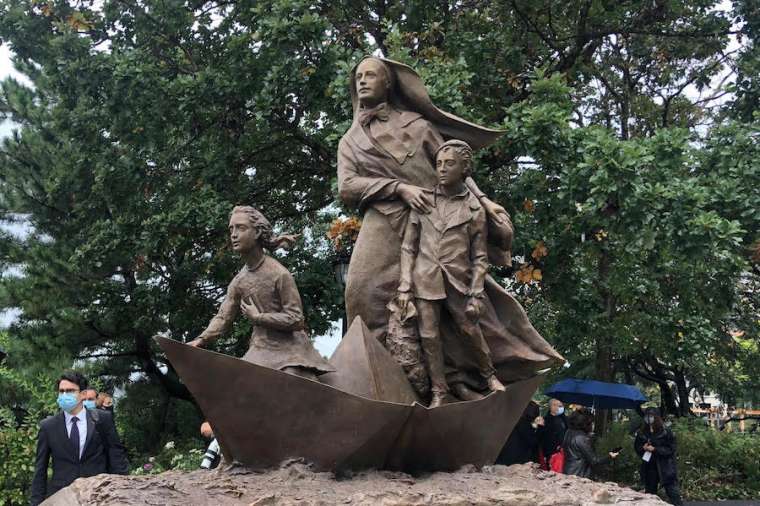 Mother Cabrini gets a new statue in New York City

A new statue of St. Frances Xavier Cabrini now overlooks Ellis Island, the Statue of Liberty and other New York City landmarks associated with immigrants, concluding a long effort by Catholics and others who objected to her exclusion by a city commission.

“We hope that people who visit this memorial will recognize that history should be repeated, that there was a care for the outcast and marginalized which Mother Cabrini understood, and we need that same care today,” Bishop Nicholas DiMarzio of Brooklyn said Oct. 12. “This is not just history, we want to make history with a new understanding of how we take care of people.”

DiMarzio had co-chaired the Mother Cabrini Memorial Commission, founded after a New York City program drew strong criticism last year for not accepting the most popular nominee, Mother Cabrini, as a subject for a new city-funded statue series intended to raise the profile of women and minorities.

In response, Bishop DiMarzio organized a fundraiser and advocacy effort to build a statue of the saint. In the 2019 New York City Columbus Day Parade, the bishop rode on a parade float with a statue of Mother Cabrini. When the parade finished, Gov. Cuomo said New York State would work with the Brooklyn diocese and the parade sponsor, the Columbus Citizens Foundation, to create a permanent memorial for the saint.

St. Frances Xavier Cabrini was the founder of the Institute of the Missionary Sisters of the Sacred Heart of Jesus, and opened and operated many schools and orphanages in New York City. She was born in Italy in 1850, and emigrated to the U.S. in 1889. She was canonized in 1946, becoming the first naturalized American citizen to be declared a saint. She is venerated as the patron of immigrants.

The new Mother Cabrini statue was unveiled Monday, Columbus Day, in lower Manhattan’s Battery Park City overlooking New York Harbor, Ellis Island and the Statue of Liberty. It shows Mother Cabrini, a young boy and a young girl in a paper boat sailing on water. The nun holds a book in her hand, while the boy holds a suitcase and a wind instrument invented in Italy.

The statue was designed by Jill Burkee-Biagi and Giancarlo Biagi, sculptors based in New York City.

“Our goal was to create a statue that would represent the perseverance spirit of an extraordinary woman in realizing her childhood dream, the dream of helping people in need around the world,” said Burkee-Biagi, NBC New York reports.

“I am so happy that there were so many people who supported this effort and I am happy with the unique design which shows Mother Cabrini in motion and taking care of children,” Bishop DiMarzio said. “I know for the artists it was a work of passion, and this statue does her justice.”

“Today the lesson of Mother Cabrini is even more vital because of the difficulties we are facing,” he said at the unveiling. “We all know these are challenging times, but as we also know in the book of life it is not what one does when the sun is shining that tests…but it is what one does in the fury of the storm.”

“Mother Cabrini only had two assets, but they were powerful assets,” he said. “She had her culture and she had her faith.”

John Leo Heyer II, a member of the Mother Cabrini Memorial Commission, said the statue “recognizes both her contributions as an Italian immigrant woman, as well as those of all Italian American and immigrant women.

“She is a shining symbol of what it means to care for the other person, the sick, the uneducated, the economically challenged and the stranger, always putting the needs of society’s most vulnerable above her own,” said Heyer.

“I hope that people will see this heroic statue, ask questions, learn about her outstanding life and work to imitate it as we all build New York’s future together,” he said.

The Diocese of Brooklyn has raised funds to build a Mother Cabrini monument in Brooklyn. Details about this monument will be announced later, the diocese said.

A Mother Cabrini statue became a point of controversy after Mayor Bill de Blasio commissioned a study into existing statues and monuments in the city, then set aside $10 million to craft new monuments better representative of the city’s ethnic and gender diversity.

Of the 150 statues in New York City at the time of the study, only five featured women. The city-run program She Built NYC received $5 million to build new monuments.

The She Built NYC program opened nominations to the public to help the commission decide on new statues.

Mother Cabrini was by far the popular favorite. She received 219 nominations, more than double the number received by the runner-up candidate, journalist and urban activist Jane Jacobs.

However, the selection committee, chaired by Mayor Bill de Blasio’s wife Chirlane McCray, decided not to choose Mother Cabrini for the statue series, drawing objections from admirers of the saint.