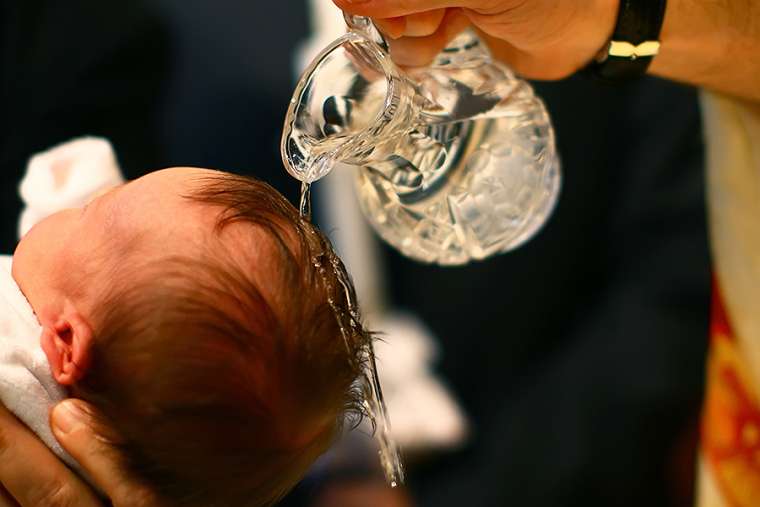 Last week, the news broke that Father Matthew Hood of the Archdiocese of Detroit had this summer learned that he was not validly baptized— despite believing that he had been ordained a priest in 2017.

Hood thought he had been baptized as a baby. But, prompted by arecently issued noticefrom the Vatican’s Congregation for the Doctrine of the Faith (CDF), Hood reviewed the video of his baptism ceremony and realized that the deacon had said “We baptize you in the name of the Father and of the Son and of the Holy Spirit,” instead of “I baptize you…”

The CDF clarified earlier this month that any baptisms administered with the formula “we baptize” are invalid, and anyone for whom the sacrament was celebrated with this formula should be considered as not yet having received the sacrament.

In one fell swoop, Hood went from being a Catholic priest to being…well, not technically a Catholic at all.

While the news was devastating to Hood, the situation was, at least for him, relatively easy to remedy. In short order, he was baptized, confirmed, and received the Eucharist. After making a retreat, he was ordained a deacon, and then ordained a priest Aug. 17.

But of course, the ripple effects spread far further. Hood’s initial lack of a valid baptism means that the Masses, confirmations, absolutions and anointings— and likely at least some of the marriages— that Hood had performed as a priest were not valid.

The Archdiocese of Detroit is encouraging those who have received sacraments from either Hood or Deacon Springer to contact the archdiocese.

Upon hearing the news about now-Father Hood’s invalid baptism, some Catholics— even if they have no connection to Hood or Springer— may be tempted, as Hood did, to review the tapes of their own baptisms to ensure that they, too, are not invalidly baptized.

But is that a worthwhile pursuit? CNA spoke with Fr. Hood himself, and with two theologians, to find out.

Fr. Thomas Petri, O.P., a moral theologian at the Dominican House of Studies in Washington, D.C., told CNA that it is not unreasonable for anyone who has a video of their baptism to review the tape, just in case.

“If I had a video, I would be reviewing my own baptism, just to be sure,” Petri said.

In the absence of a video, Petri said trying to rely on memory alone may not be as helpful. Those present at the baptism may not have been paying close attention, he said, and people in general are prone to misremembering.

“Having a home video is one thing, but trying to investigate through witnesses is a whole other thing that will just take over your life…in the vast majority of cases, the vast majority are going to be fine, and valid. I suspect we’re talking about a very small percentage [that are invalid].”

“I think you just open yourself up to a rabbit hole that you ought not go down, unless you have real, hard evidence that you should pursue that,” he said.

All people, especially priests, should be attentive to what goes on at every baptism, and celebrate sacraments in the way that the Church has prescribed,” he continued.

“Altering the words of the liturgy creates real problems. And sometimes this is done with the best of intentions— wanting to seem personable, and wanting to connect with the family— but it’s using the wrong means. It’s an inappropriate way to do it.”

Still, Petri said it is important to always remember what the Church teaches: God himself guarantees the sacraments, but he himself is not bound to the sacraments.

“So I think we have to believe that God can still give graces, and we know that he does give graces apart from the sacraments. So I think only in cases where there’s proof that it is invalid should we worry,” Petri said.

Finding out that your baptism was invalid would not mean that you are unable to receive graces throughout your life, he clarified. Instead, any graces that you received from God during your life would have been given in an “extraordinary” way.

While these graces come in an “ordinary” way through a valid baptism, there are other, “extraordinary” ways of obtaining the graces of baptism, such as a “baptism of desire” for those about to die.

The case of Father Hood is actually a good example of how God’s grace can operate outside of the sacraments, Petri said.

“Somehow, by the grace of God he discerned a vocation to the priesthood, even though he wasn’t baptized,” he pointed out.

Of course, anyone who is not validly baptized should seek to be validly baptized as soon as possible. If it appears from video evidence that your baptism was invalid, contact your diocese, he said.

Father Mark Morozowich, dean of the school of theology and religious studies at The Catholic University of America, said if there are other people who were baptized by the same deacon who invalidly attempted to baptize Hood, it would be reasonable for them to review the tapes, if possible, or at least question whether their own baptisms may also have been invalid.

“If he did it in one case, could he have done it in other cases?” he wondered.

The Church presumes the validity of baptisms unless there is proof to the contrary. Still, he recommended anyone who doubts the validity of their own baptism to contact their local priest, as well as their archdiocese.

The words of the sacrament do matter, he said. However, “we always have to remember that God does not desire the death of a person, but desires that they live. And if a person has lived their entire life believing in God, and believing that they were baptized, God will bring them unto Himself.”

“Even though this person may have been denied the specific graces of baptism, it did not mean that he did not lead a life that was blessed by God.”

For his part, Fr. Hood said that he hopes his story will not cause people anxiety. He said he’s learning to trust in God’s Providence.

“I think for my situation, we were able to act because something was made clear, and I think God desired for that to happen. I don’t think people need to all of the sudden doubt the validity of their own baptism. By and large, baptisms are celebrated correctly in the Church,” he said.

“If someone knows for certain that the wrong words were used, then they can act. But if you don’t know, or there’s no evidence, you don’t need to be worried about it.”

“Being worried about it is not from God. Jesus says ‘have no anxiety about anything.’ So that’s just from the Evil One, I think — that concern that now I just need to be greatly worried about whether my own baptism is valid,” Fr. Hood said.

“If you know there’s a video— go ahead and watch it. But other than that there’s not cause for greater anxiety because of this.”

Being invalidly baptized does not mean that God was absent from a person’s life, Morozowich added, as was the case with now-Father Hood.

“God’s activity will not be thwarted by the ineptitude of a human being.”

Colombian bishop on massacres: We’...