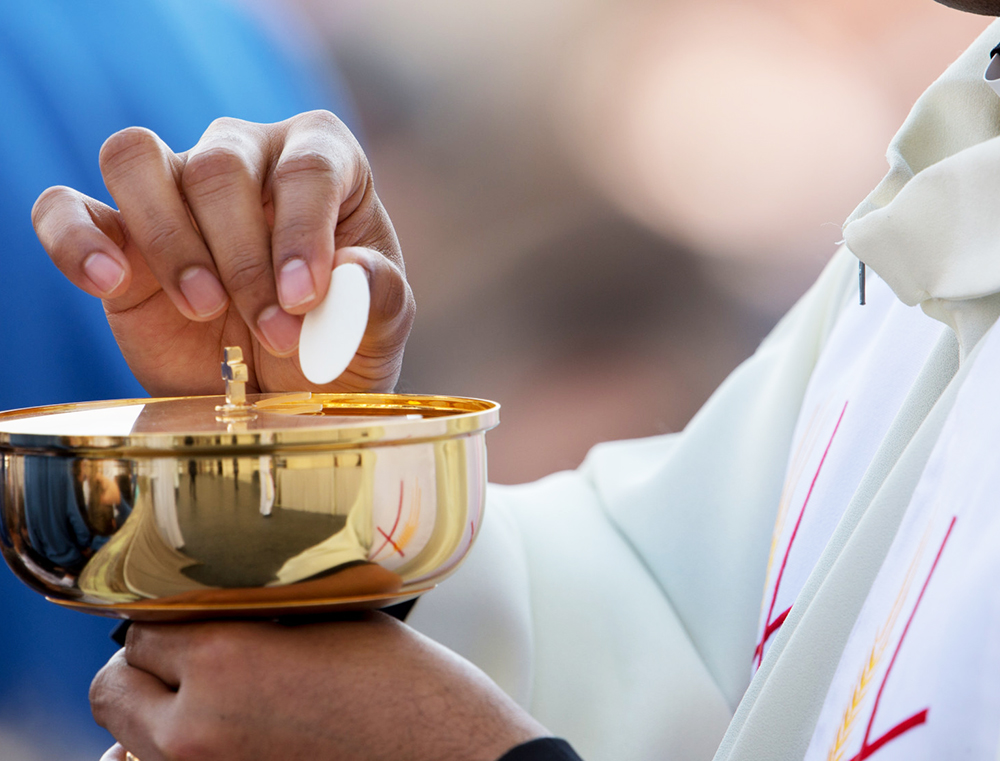 “By preparing children for First Communion we introduce them into the principal mystery of Christian life.” —Pope St. John Paul II

As a parent of young children, the importance of First Communion was not lost on me, although I admit I had not anticipated any sense of excitement or anything beyond the happiness that my child had taken one more milestone closer to an intimate communion with Jesus. For years, I would hear my pastor or priest say, “We’ve got First Communion this weekend” and I hardly ever batted an eye. But recently, when our 8-year-old son received First Communion on this year’s Solemnity of Corpus Christi, my wife and I absolutely lost it.

An opportunity emerged last fall when the new cycle of CCD started up in our local parish and there was a need for a teacher of the class for First Holy Communion. My wife jumped all over the opportunity since, in her words, “If it’s my kid in that class, I need to know it’s being done right.”

The year of teaching came with many challenges. Coming up with memorable activities that enabled strong catechesis but also kept the 7- to 8-year-old’s attention — not an easy task. Battling donut Sunday was never easy either. Of course, meeting parent’s expectations and also building their formation as informed Catholic parents was another aspect of the position. Among these challenges was the imminent pandemic, which at first delayed Mass and soon obstructed CCD altogether, until a virtual learning program was completed and instituted.

Eventually, restrictions lifted, things came together, and our priest in coordination with the parents and CCD catechists chose the Solemnity of Corpus Christi as the date those prepared and able would receive First Holy Communion.

I suppose the anticipation of our first in-person Mass in nearly 4 months (we live in Northern Italy) had amplified our emotions that day. We got a nice outfit for our boy and made sure we had our masks, but there was one special item we had as a surprise. And concerning that, you should know that of our four children, three are boys and one more is one the way. With vigilance and love, we encourage the possibility of our boys choosing the priesthood as a vocation. Throughout the year we take them to Benedictine monasteries, allow them to ask questions to priests, encourage them to “play Mass” every day at home with a real set, and generally pursue every non-pressure situation that might keep them open to the idea. Our goal: make the option of becoming a priest or religious a normal idea. So, needless to say, something like First Holy Communion is more than a milestone — for us it’s an opportunity to participate what they might more fully participate in later in life.

The day of his First Holy Communion, then, came on the Feast of St. Anthony of Padua. We live 30 minutes from the basilica in Padova, and it was a great opportunity to venerate a saint and make the day even more special. That morning, from the basilica’s religious shop, which sells vestments and vessels, we purchased a chalice as a gift for Gabriel, our oldest who was receiving later that day. We didn’t tell him about it, nor about our agreement with the priest that he would bless it and use it in that Mass.

As mentioned, my expectations did not initially exceed anything more than an informed Catholic father who appreciates the special milestone. But that morning, and the rest of the day up to the Mass, I began reflecting on every incredible moment of Catholicity that this young boy had been part of for the last eight years.

Please understand that my wife and I are not “cradle Catholics.” I told my conversion story onThe Journey Homeand nine months after my conversion, my wife entered the Church. But before then, there was Gabriel. See, my wife was pregnant with our first when I made inquiries to Catholic friends and attempted to prove them wrong on everything from infant baptism to the Eucharist. The issues fell one by one over the course of months as I read and studied my way into the Catholic Church. But to my wife — not that she didn’t become supportive — the decision was all-of-a-sudden and the timing couldn’t be worse. While we were bringing a life into the world, I was making life-changing decisions. Gabriel was born in February and was baptized within eight days. We joke that he was the first Catholic McAfee. And now, in eight incredibly short years, he was receiving First Holy Communion. Reflecting on all of this, the moment came with and escalated sense of gratitude for how God had worked in our lives and his.

The day arrived and there was one short rehearsal and afterward Gabriel was selected to bring the ciborium and hosts to the altar. He did this so sweetly. Moments later, the First Communicants made their way up to receive. Gabriel’s turn came and for what seemed like an eternity, he stared at the host which was placed in his hands. At that moment, I totally lost control and welled up with tears, clutching and squeezing my wife’s hand to maintain some sense of control. Holding it together or not, I made my way back to the pew and let the tears come out. And I didn’t care. It was a moment of absolute gratitude and joy.

The Mass finished and Gabriel, still unaware of the gift, was told to go and talk to the priest. Father came right up to him and asked him to name the different vessels of the Mass. Gabriel named them all and picked up the chalice and said something I hope I never forget: “This cup is one of the most recognizable symbols of our Faith. It holds the precious blood of Jesus, and one day, your parents and hope for you use it again as a priest.”

Later that day, Gabriel overheard my wife and I talking about how far we’d come in the Faith we once resisted, and Gabriel asked inquisitively, “Why was today so special for you both?” We gave him the following reply.

“Gabriel, you have to know that mom and I did not grow up Catholic and actually never thought we’d be Catholics. But the fact is, believing in what the Eucharist is is a very difficult teaching. We’re the only ones in our family that believe it, and you were born when we decided to believe it and change. Now, eight years later, you truly believe it, too. And Mom and I couldn’t be more happy that you actually get it, rather than just doing it because we told you to or signed you up for CCD.”

From now on, when a priest says “We’ve got First Communion this weekend,” it’s safe to say that I’ll ever feel the same way.