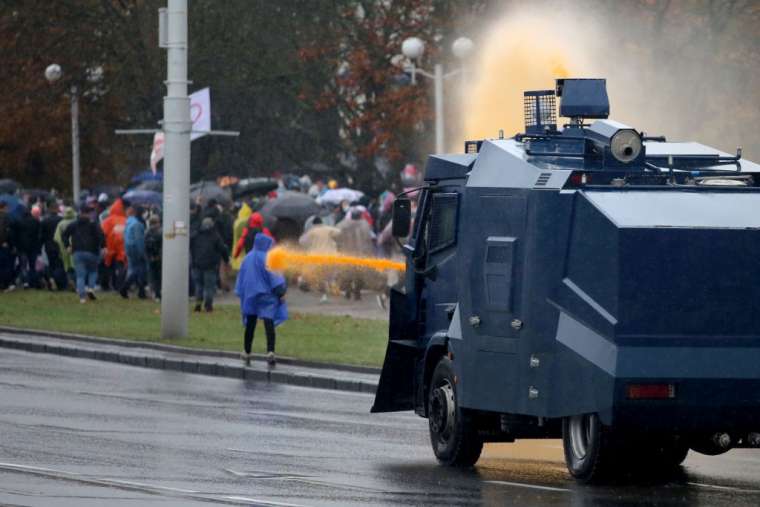 Archbishop Ante Jozi?, who was appointed apostolic nuncio to Belarus earlier this year, arrived in the country Sunday, being met by both ecclesial and state authorities.

His arrival comes as relations between the Holy See and Belarus are strained over claims the Church in Belarus is being used to exert foreign influence, and the exile of the head of the Belarusian bishops’ conference, amid unrest over a disputed presidential election.

Belarus has seen widespread protests in recent months following a disputed presidential election. Protests began Aug. 9 after president Alexander Lukashenko was declared to have won that day’s election with 80% of the vote. Lukashenko has been president of Belarus since the position was created in 1994.

Archbishop Jozi? arrived in Minsk Oct. 11, and was met at the airport by nunciature staff, representatives of the local Church, and state authorities.

Bishop Iosif Staneuski, auxiliary bishop of Grodno and secretary general of the Belarusian bishops’ conference, greeted the nuncio, who was accompanied by Father Maher Shammas, secretary of the nunciature, and Father Victor Gaidukevich.

From the airport, Archbishop Jozi? went to the apostolic nunciature.

Archbishop Jozi?, 53, was appointed apostolic nuncio to Belarus May 21, and he was consecrated a bishop Sept. 16 by Cardinal Pietro Parolin in his native Croatia.

He was ordained a priest in 1992, and began preparing for diplomatic service to the Holy See in 1995 at the Pontifical Diplomatic Academy. Beginning in 1999 he served at the nunciatures in India and Russia.

The diplomat was appointed apostolic nuncio to Ivory Coast and Titular Archbishop of Cissa in February 2019. He was to have been consecrated a bishop that May, but he was hospitalized in critical condition after a car accident in early April.

Archbishop Gábor Pintér was the previous apostolic nuncio to Belarus, serving there from 2016 until November 2019, when he was transferred to the nunciature in Honduras.

In Belarus protests have taken place across the country since the August election, and thousands of protesters have been detained. At least four people have died in the unrest.

The US, UK, and EU no longer recognize Lukashenko as the Belarusian president. Canada, the UK, and the EU have placed sanctions on senior Belarusian figures.

Russia continues to support Lukashenko; it recently put Tsikhanouskaya on a wanted list.

On Sept. 29 the Vicar General of the Archdiocese of Minsk-Mohilev denied reports from Russia’s foreign intelligence agency that the Church in Belarus is being used by the US, calling them “complete nonsense, fake information.”

“Some media outlets published information provided by the head of Russia’s foreign intelligence service Sergey Naryshkin. This is a fake, this is nonsense. He spoke about some provocations, about the fact that the United States, the CIA and other organizations are trying to use the Catholic Church to undermine the state system in our country. This is complete nonsense, fake information, lies that have nothing to do with the truth … This is information that should be treated with a touch of irony,” Bishop Yury Kasabutski said during his homily at a Mass in Minsk.

Naryshkin is director of Russia’s Foreign Intelligence Service. The Russian news agency Interfax reported Sept. 29 that Naryshkin had said, “the United States is also unceremoniously interfering in the religious situation in Belarus … The clergy of the Roman Catholic Church are being asked to openly criticize the Belarusian authorities and to use religious events, including sermons, prayers, religious processions, to conduct opposition political propaganda among believers.”

The Russian foreign intelligence director added that “According to the plan of the Americans, this should force Minsk to take harsh retaliatory measures against the Roman Catholic Church.”

Naryshkin said the Belarusian opposition is planning a “resonant provocation” during which a high-ranking cleric “would be arrested or even wounded or killed,” with the intention of increasing opposition sentiment among Catholics in the country.

The president of the Belarusian bishops’ conference, Archbishop Tadeusz Kondrusiewicz of Minsk-Mohilev, was exiled in August. Lukashenko has suggested the archbishop might be a citizen of more than one country.

Archbishop Kondrusiewicz’ passport was invalidated, and he was blocked from returning from Poland by border guards Aug. 31. The archbishop has spoken in defense of the protests following the presidential election.

The archbishop told CNA: “I was accused that I received from Warsaw some instructions, or something, but I didn’t visit Warsaw.” He said he had visited eastern Poland to celebrate the First Communion of a relative.

Archbishop Kondrusiewicz wrote to Archbishop Jozi? after his episcopal consecration, saying: “Your Excellency, on the day of your episcopal ordination, I cordially greet you on my own behalf, as well as on behalf of the Conference of Catholic Bishops in Belarus and all Catholics of our country … For the development of our pastoral and social activities, as well as relations with the state at this turning point in our history, we need your support as a representative of the Holy See.”

Critics of Columbus Day get histor...