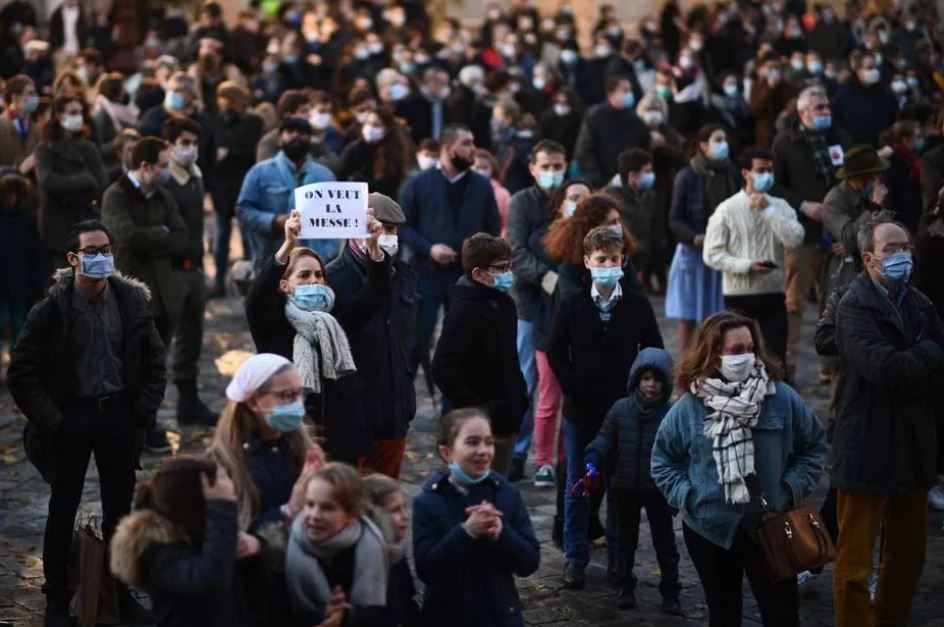 A few months after the first coronavirus lockdown deprived millions of Catholics worldwide of the Holy Mass, including Easter celebrations, new coronavirus restrictions adopted by several European countries have once again plunged the faithful into disarray.

Following renewed restriction in Ireland, France and Belgium, England has entered a new period of lockdown Nov. 5, which is due to last — in all these countries — until the beginning of December. Meanwhile, the respective populations were again prohibited from attending religious celebrations (although, in most cases, places of worship can remain open). Severe limitations on attendance at church services are already enacted in several other European countries that haven’t yet announced an official national lockdown — including Spain, the Netherlands, Portugal and Switzerland.

While during the first lockdown, in spring 2020, the ban on public Mass was quite readily accepted both by the Church authorities and the faithful, notably because of the complete lack of knowledge regarding this new disease, the current new wave of heavy restrictions to worship met with opposition from Church leaders. In each country, the bishops have protested that they can ensure a safe access to churches and that there is no evidence that such services represent a risk of spreading the virus.

This conviction, that such prohibitions, are unjustified has brought swift action from the Bishops’ Conference of France — several members of which already blamed the government for its lack of equity during “Phase 2” of the coronavirus emergency in May 2020. In response to the latest lockdown, the French bishops have filed an application for interim relief at the Council of State for offenses against religious freedom; however, the interim relief judge rejected the appeal Nov. 7 on the ground that the restriction was imposed due to public health concerns.

“We have received this decision with sadness because Mass is the summit of the Catholic faith and the irreplaceable encounter with God and our brothers in Christ, and we think that Christian celebrations are a crucial resource to go through the current crisis, individually and collectively,” Father Hugues de Woillemont, spokesman of the French bishops, told the Register, highlighting the fact that in its decision, the Council of State also reaffirmed that freedom of worship was a fundamental human right. According to Father de Woillemont, the French bishops also called for a formal meeting between religious representatives and the government, to reevaluate the suitability and proportionality of the current measures.

“We are still expecting new decisions from next week, and we remain hopeful,” Father Woillemont said. “Safe and controlled gatherings are a huge place of support and comfort for people, especially the poor, single and isolated people.”

Both the French Bishops’ Conference and England’s Catholic bishops are lamenting the fact that their respective governments have been inconsistent at best in deciding that Church services are “non-essential” to society, whereas supermarkets, schools, public transportation and even tobacconists are considered essential services.

Many Church leaders in both countries view such an arbitrary classification of the citizens’ vital needs, despite the churches’ strict compliance with safety protocols, as incomprehensible and unjust. They see in this approach an implicit suggestion that freedom of worship is to be interpreted as nothing more than a freedom to gather.

For Bishop Philip Egan of Portsmouth, in the county of Hampshire, England, this attitude has revealed the extent of secularism in the Old Continent. “From their point of view, all religions are the same and they don’t understand the nature of Mass for a Catholic,” he said in an interview with the Register.

In a letter sent to Prime Minister Boris Johnson and the whole U.K. Parliament asking for the continuation of public liturgy, Bishop Egan urged them to take account of spiritual life as a basic need of the human soul, having a direct impact on mental health, psychology and emotional well-being. “I reminded them that for Catholics, churches symbolize the person of Jesus Christ and that a suspension of Mass would strike the faithful at the very heart of their Christian faith; but, unfortunately, they didn’t listen and so we are back to live streaming Mass again,” he told the Register.

A Place of Contamination?

Echoing what Father de Woillemont said regarding the lockdown in France, the bishop of Portsmouth pointed out that the Church in England has widely participated in the national effort to fight the epidemic. In his view, churches were “the safest of all places, at least safer than a supermarket.”

This question as to whether places of worship can represent a source of new coronavirus infection is still subject to debate. French authorities used a recent American study about the COVID-19 hotspots — which ranked religious gatherings among the top six hotspots — to justify the suspension of Mass. Yet another large study conducted by the Municipal Health Services (MHS) in the Netherlands suggested that the contamination rate in places of worship is only 0.6%, far behind family or domestic contexts, professional and school contexts, restaurants or sports centers.

Anna Kruse, spokeswoman of the Bishops’ Conference of the Netherlands, told the Register that the Dutch government has let churches decide on the safety measures themselves in accordance with the freedom of worship provided by Dutch law. While the MHS study encouraged the Dutch government to exclude the suspension of gatherings at Mass, the Dutch bishops have decided on their own initiative to limit public Mass to 30 people and to suspend choirs in order to avoid any risk of airborne contaminations.

‘Give Us Back Mass’

But the bishops in countries under lockdown are not the only ones to be outraged by government measures. There are also an increasing number of initiatives from Catholic faithful, especially in France, where protesters have rapidly gathered on social media under the hashtag #RendezNousLaMesse (“Give Us Back Mass”).

Since the Nov. 7 dismissal of the bishops’ appeal by the Council of State, the outcry from the faithful has intensified. Public demonstrations are taking place in front of churches in France’s major cities, numbering hundreds of people. One nationwide demonstration that took place on Sunday, Nov. 15, defied the French Minister of the Interior’s threats to issue tickets against participants.

A few days earlier, across the Channel, a group of young Irish Catholics issued a video message to their country’s leaders, begging them to “let them go to Mass.” In England, the faithful have launched an online petition — which gathered more than 32,000 signatures — asking the government to allow corporate worship.

British bishops, for their part, have been responding to their government’s refusal to follow up on their request to gather for Mass through national initiatives that ask the faithful to join them in prayer. In a joint statement, Cardinal Vincent Nichols, president of the Bishops’ Conference of England and Wales, and Archbishop Malcolm McMahon, the conference’s vice-president, called for a shared moment of prayer each day at 6pm, and a day of prayer for the ending of the epidemic on the Vigil of Christ the King, Nov. 21.

Bishop Philip Egan, for his part, has called for a special day of prayer and fasting in his diocese of Portsmouth on Nov. 27, the last Friday before the beginning of Advent, urging Catholics to stay united despite once again being deprived of the holy sacraments.

“I think it will be the first of several initiatives,” Bishop Egan said. “I must say that I felt very encouraged by the fact that, throughout this crisis, I’ve been seeing many examples of how God has been at work amongst our people and our priests, who are very creative in finding ways to continue to minister the sacraments despite their Government lockdown.”

“God is at work,” Bishop Egan added, “and I see that many people are even more committed to Mass than before: maybe there is light at the end of the tunnel!”