New Papal Book Is ‘Collaboration’ Between Francis and Austen Ivereigh 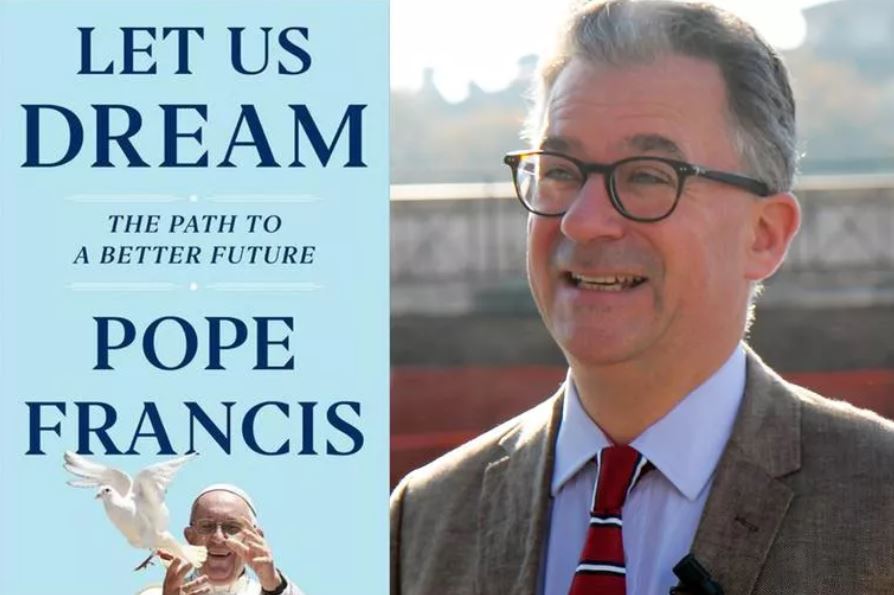 New Papal Book Is ‘Collaboration’ Between Francis and Austen Ivereigh

Ivereigh told the Register that while he took an active role in crafting Let Us Dream, the Holy Father was ‘wholly’ responsible for the book’s content.

ROME — A new book in which Pope Francis discusses the challenges and opportunities deriving from the coronavirus crisis will be formally published on Tuesday.

The 150-page book, called Let Us Dream: The Path to a Better Future, was written by the Holy Father “in collaboration” with Catholic writer Austen Ivereigh, according to its publisher, Simon & Schuster.

Ivereigh is the author of the 2015 biography of the Pope, The Great Reformer: Francis and the Making of a Radical Pope and more recently, Wounded Shepherd: Pope Francis and His Struggle to Convert the Catholic Church.

Let Us Dream is an unusual book in that, although it says it is the fruit of interviews made during the COVID-19 crisis between the Pope and Ivereigh, no questions appear in the text. Instead, only the Pope’s voice is heard, except for a postscript by Ivereigh at the end.

The book is divided into three parts: The first presents the crisis, the second evaluates it and the third issues a call to action. It is a method known as “see, judge, act,” which Francis used in his environmental encyclicalLaudato Si(The Care for Our Common Home).

The method derives from Belgian Cardinal Joseph Cardijn (1882-1967), a social activist who had a considerable influence on the Second Vatican Council. It was also adopted by Popes John XXIII and Paul VI.

Assessing the COVID crisis in the book, Francis explains what it can teach us about how to handle crises in our own lives and in the world at large. He then draws on some of his own experiences of upheaval, stressing the importance of not returning to a pre-crisis state.

He also offers a scathing critique of current socio-economic and political systems and ideologies that he believes conspired to produce the crisis, and lastly offers a blueprint for building a better world, “putting the poor and planet at the heart of new thinking,” according to the book’s publicity.

Let Us Dream is an “epiphany, a call to arms,” that shows Pope Francis “at his most personal, profound and passionate,” the publishers write. “With this book and with open hearts, we can change the world.”

‘The Virus of Polarization’

A key passage deals with today’s “polarized environment” and provides an insight into how the Pope handles criticism and impassioned debate.

“We must be aware of the bad spirit which enters into division and creates a downward spiral of accusation and counteraccusation,” the Pope writes. “An ancient term for the devil is the Great Accuser. Here, in verbal violence, in defamation, and in superfluous cruelty, we find his cave. It’s best not to enter.” (The Pope had often warned of the “Great Accuser” in daily homilies immediately following the testimony of Archbishop Carlo Maria Viganò, but never directly referred to him).

The Pope adds: “You don’t argue or dialogue with the Accuser, because that is to adopt his logic, in which spirits are disguised as reasons. You need to resist him with other means, throwing him out, as Jesus did. Like coronavirus, if the virus of polarization cannot transfer from host to host, it gradually disappears.”Latest News

Rather than be “trapped within the labyrinth of accusation and counteraccusation, which conceals the bad spirit in a tissue of false reasons and justifications, we need to allow the bad spirit to reveal itself,” he continues, adding that he believes this is what Jesus teaches us from the Cross. “In gentleness and powerlessness, he forced the devil to show himself: the Accuser confuses silence with weakness, and redoubles his attack, revealing his fury, and thereby who he is.”

And yet at the same time Francis argues that “our main task” is not to “disengage from polarization” but rather to “engage with conflict and disagreement in ways that prevent us from descending into polarization.” For Francis, this means “resolving division by allowing for new thinking that can transcend that division” and so “bear valuable new fruit.” He then explained how reading the theologian Father Romano Guardini helped him deal with conflict.

How It Was Written

Undoubtedly, the book clearly reflects the Pope’s own thoughts and experiences, as much of its content is based on what he has said or written before. But questions have arisen whether it’s truly all his own work. In its write-up of the book, the Associated Press said it was “ghost-written” by Ivereigh, adding that “at times the prose and emphasis seems almost more Ivereigh’s than Francis.’”

In response, Ivereigh told the AP that was “somewhat intentional,” as he hopes a “more colloquial English-speaking pope will resonate with English-speaking readers and believers.” https://a9f5f86266352ee2c3bd936c871b1a5e.safeframe.googlesyndication.com/safeframe/1-0-37/html/container.html

In an interview with America magazine last week, Ivereigh said the book is “the fruit of many conversations and exchanges that Pope Francis and I had over the summer, during lockdown, about the COVID crisis, but I wasn’t ever able to go over to Rome and sit with him so it couldn’t ever really be kind of an interview.”

He said a “system” was therefore worked out “where I would ask him questions, he would sometimes suggest articles, I would draft, he would then work on the draft.” Ivereigh added that “a collaboration is one way of putting it,” but he preferred to call it “much more of a master-disciple relationship.”

“I suppose what I did was that I provided the kind of architecture, the scaffolding if you like, around which the Pope could organize his ideas, hang his thoughts, and ultimately I thought it worked well,” he said.

In comments to the Register, Ivereigh said to call it ghost-written “is not accurate” as he didn’t write it “on his behalf” but rather Francis was “intensely involved in the whole process.” The content, he added, “is wholly his, including those passages where he expresses a debt to others who have helped to shape his thinking.”

“As I’ve explained elsewhere, there was a variety of material I drew on for the initial drafts, but he was always the source: answers he recorded in answer to my questions, or documents he shared with me,” Ivereigh said.

“Sometimes he directed me to writings from his past — as a Jesuit or archbishop — where he felt something was well explained or expressed. What I drafted was then worked on by him, revising and rewriting.”

Ivereigh added that the effort Francis put into the book “was impressive” and that “one thing I learned about the Holy Father, from working with him, is that he trusts those he works with, and makes great efforts to ensure they succeed.”