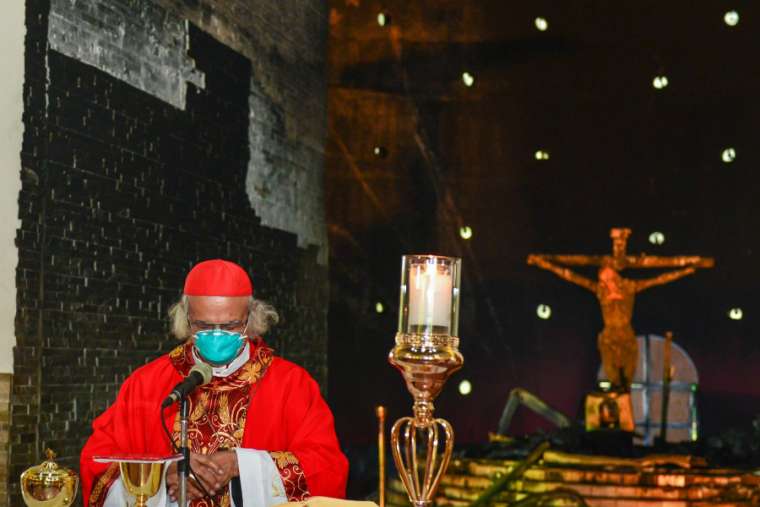 Cardinal Leopoldo José Brenes Solorzano of Managua said Mass Wednesday at the entrance of the Blood of Christ chapel in his cathedral, which was firebombed last week.

“The Church has always suffered and will continue to suffer, but our assurance is that the Lord is with us,” Cardinal Brenes said during the Aug. 5 Mass.

He called the July 31 firebombing “an act of terrorism.”

Anti-government protests in Nicaragua began in April 2018. They have resulted in more than 320 deaths. The government has accused many bishops and priests of siding with the opposition.

A small group of priests and religious participated in the Aug. 5 Mass. Behind the cardinal could be seen the large image of Christ crucified that was scorched by the attack. During the Mass, the cardinal showed the face of Christ, which had broken away from the corpus during the fire.

The Archbishop of Managua said there is “an atmosphere of sadness and pain…because what we feel from this nightmare is: When are we going to wake up?” He urged clinging to “the cross, because if we are clinging to his cross, who can separate us from the love of God?”

Cardinal Brenes said that looking at the image of Christ crucified, “we see our Blood of Christ charred, but still standing.”

The Blood of Christ chapel of Managua’s Immaculate Conception Cathedral has been home to a crucifix made in the 17th century.

Bishop David Malloy of Rockford, chair of the US bishops’ international justice and peace committee, said Aug. 5 that the crucifix “has become a poignant image of the country’s suffering Church, which has sustained repeated rhetorical and physical attacks (three in the last three weeks) since attempting to mediate peace in 2018.”

He added that “The Church in the United States stands with the suffering Nicaraguan faithful, and with all people of goodwill striving for peace and reconciliation in Nicaragua.”

Msgr. Carlos Avilés, vicar general of the Archdiocese of Managua, said Aug. 4 that “the only threats we have gotten have been from the government, they’ve been publicly speaking out against the bishops, calling them ‘terrorists’ trying to overthrow the president, and they’ve been criticizing the Church.”

“We condemn both nationally and internationally the irrational actions of the government through its violent repression and not accepting the humanitarian aid which the Church has offered,” he added.

The vicar general said that there is “an undeclared persecution, an open persecution against the Church.”

The identity of the man who perpetrated the attack on the chapel is unknown; he wore a hood while in the cathedral.

Several churches or chapels in Nicaragua have been vandalized in recent weeks.

On July 29, Our Lady of Perpetual Help chapel in Nindirí, about 13 miles southeast of Managua,was attacked. The perpetrators stole the tabernacle and the ciborium, smashed statues, and trampled the Hosts.

There was an attack on Our Lord of Veracruz parish in Masaya district, fewer than 20 miles southeast of Managua, July 25. The chapel was desecrated, and audio equipment and money boxes were stolen.

Nicaragua’s crisis began in 2018 after president Daniel Ortega announced social security and pension reforms. The changes were soon abandoned in the face of widespread, vocal opposition, but protests only intensified after more than 40 protestors were killed by security forces.

The pension reforms which triggered the unrest were modest, but protests quickly turned to Ortega’s authoritarian bent.

Ortega has been president of Nicaragua since 2007, and oversaw the abolition of presidential term limits in 2014.

Ortega was a leader in the Sandinista National Liberation Front, which had ousted the Somoza dictatorship in 1979 and fought US-backed right-wing counterrevolutionaries during the 1980s. Ortega was also leader of Nicaragua from 1979 to 1990.

The Nicaraguan clergy have not hesitated to call out the government for its violent repression of protests and for human rights abuses, making the Church an adversary in the eyes of the government.

On various occasions both bishops and priests have been physically assailed by pro-government supporters, and other acts of vandalism and intimidation have occurred.

Managua’s cathedral was also the site of a hunger strike in November 2019. The hunger strikers were calling for the release of their relatives, whom they believe to be political prisoners. Pro-government forces besieged the cathedral in response.