On the Feast of St. Andrew, Some Thoughts About Brothers 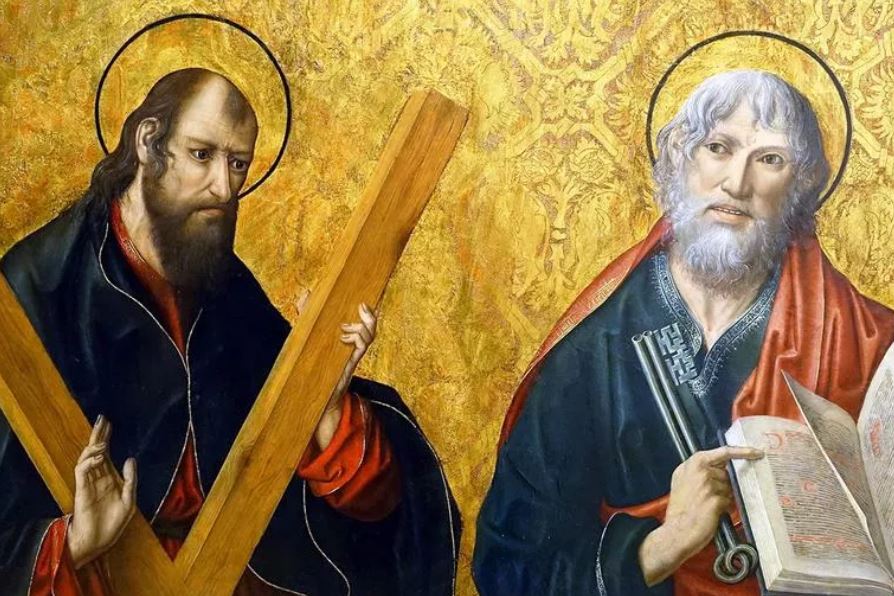 On the Feast of St. Andrew, Some Thoughts About Brothers

COMMENTARY: Twenty centuries ago, a brother knew he was his brother’s keeper.

Who says you can’t learn something from online Mass?

During COVID-19, our family has employed online Mass, mostly the “Daily TV Mass” from Loretto Abbey in Toronto, produced under the auspices of the Archdiocese of Toronto and the National Catholic Broadcasting Council of Canada.

As a professionally-produced broadcast Mass, there are certain set shots, e.g., the camera fixes during the Agnus Dei on a stained glass windows of the Lamb on the Book of Seven Seals.

One of those standard shots has added two new names to our house.

During the “Our Father,” the camera always shows the stained glass window depicting Jesus giving Peter the keys of the kingdom. The three-tiered window has Jesus in the middle and Peter kneeling in the left panel. Behind and around Jesus are other disciples. To Jesus’ right and just behind his back are two other men (no beards). It’s clear the one on Jesus’ right is St. John, and the one behind him is St. Andrew. There is a clear visual line from the kneeling St. Peter in the bottom left through Jesus in the middle to St. Andrew in the upper right. It takes a moment, but the viewer realizes that the first pope is looking right at him.

That is, at his brother — St. Andrew.

I have two boys at home. My 12-year-old tends to get up first and usually comes to me for Mass. I have started calling Karol “Andrew,” and asking him to go get his 20-year-old brother, John (whom I call “Peter”) who tends to have a harder time getting out of bed. “Andrew” always gets “Peter.”

Two boys in the house are a blessing. Not having had a brother, I cannot compare the experience, but I know that older and younger brothers don’t always get along amicably. The youngest (and Karol is the youngest) tend to be doted upon and that doesn’t always turn out well: think of Joseph and his siblings (Genesis 37).

Joseph probably got away with a lot of things Reuben, Judah et al. never dreamed possible. (Don’t know if they had a sister, but I am assured by my trio, of whom my daughter Alexandra is the eldest, that “the oldest girl had the tightest leash.”) So, as I said: sibling rivalry doesn’t always turn out well.

Well, my two boys have always been the best of friends: if I had to imagine what being brothers is like, they are my image. John always took care of his little brother, sometimes even letting him have his way “because he’s younger.” Karol, while not above exploiting the opportunity, has also learned not to use his brother but to be his best friend.

Can you envision this scene when Jesus was picking his Apostles? Peter was probably in the boat, fixing nets, because he had to be serious, put the fish on the table, and “take care of things.”

Andrew probably got to wander around a little more, hear what was going on in the town, do “his thing.” He was probably hanging with one of his friends, who was more interesting than his brother and his smelly fish. And, in doing that, they met this rabbi who sounded interesting … and proved interesting enough that “they stayed with him that day” (John 1:39).

Depending on his workload, Peter was in his boat (a) grumbling at his no-good lazy brother; (b) figuring the kid found something interesting to do; (c) as usual was off dreaming; or (d) all of the above. If Peter was anything like my John, he likely indulged a brother who didn’t show up. Maybe they had a fight that morning and Andrew walked out the door. Or maybe he promised to be there by seven o’clock but … well, you know. Can you maybe imagine Jesus having two brothers like them in mind when he told a certain parable about a man with two sons (Matthew 21:28-32)?

Pope Francis to New Cardinals: May the Cross and Resurrection Always Be Your Goal

(Okay, well Zebedee’s boys James and John could have recognized themselves in the parable, too.)

What’s interesting is that, in describing the afternoon that Andrew spent with Jesus, St. John notes that “the first thing Andrew did was find his brother … and … brought him to Jesus” (1:41-42).

Who knows how that meeting went? One can only imagine Andrew running up to Peter, “Listen, listen, listen, hey, guess what! Know what I found? You’re not going to believe it!” I can see him jumping around in the boat in front of a tired Peter, who may have been wondering where his brother has been hiding out, not unlike a brother I know who makes himself scarce one minute — and then the next, he’s gleefully jumping on top of his brother over and over till he gets out of bed.

Maybe Peter at first didn’t want to come. Maybe he had “something more important to do.” Maybe he even upbraided Andrew for not carrying his fair share. After all, “it isn’t fair …”

In my own family, I rejoice — not just because of the Andrew and Peter that live with me, but because the priest who married my parents — a cousin, Father Zator of the Zators of Shamokin, Pennsylvania — was one of three brothers who all became Conventual Franciscans. I’m not sure right now which one married them: Fabian or Faustyn (not Angelus) — a lesson to kids: Ask your parents these things while you still have them to tell you.

I said you can learn a lot from online Mass. During the week, I sometimes join in online Masses that the English Dominican province has provided during this pandemic. (Remember that England is five hours ahead of the U.S. East Coast.)

Aug. 18 was the feast of Blessed Mannes de Guzman. I never knew who he was before that day, but learned that he was the elder brother of St. Dominic de Guzman, the founder of the Dominicans. Dominic first followed God, but this 12th-century “Andrew” later managed to bring his brother — Mannes — to the order after him.

I don’t know enough at this point but to speculate. I can imagine that, in medieval Spain, Mannes may have had a greater incentive to remain in the world: inheritances generally passed to boys by seniority. If that was true (and I’m not vouching for it), consider: if they had stayed in the world, they might have profited materially, but who would remember Dominic & Mannes de Guzman, LLC. Inc., today? Probably no more than people would remember Pete and Andy, Fishmongers Inc..

But today, in America, eight-and-twenty centuries after a man led his brother by the nose, perhaps diverting him from “something more important to do,” inscribed them both in God’s Book and man’s memory. Peter and Andrew never heard of a place called America, and Dominic and Mannes probably never imagined that people in the year A.D. 2020 might think of them, but they do … all because of a brother  who took his beloved brother to show him “the Messiah, the Christ.” A brother who knew he was his brother’s keeper.