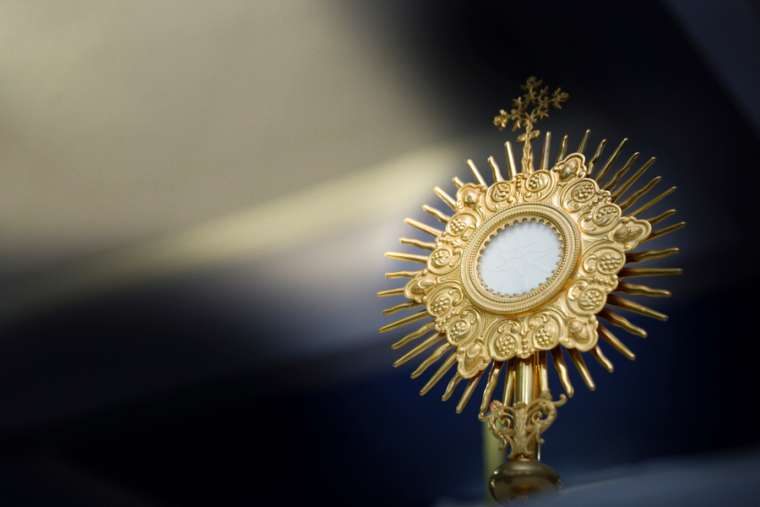 A Canadian bishop has announced a month-long prayer of reparation after the cathedral’s tabernacle was stolen and later found dumped in a nearby canal.

Bishop Gerard Bergie of the Diocese of St. Catharines, Ontario, requested on September 11 that Catholics offer a prayer of reparation from Monday, Sept.14–the Feast of the Triumph of the Cross–until Monday, October 12, which is the date of Canada’s Thanksgiving holiday.

“The Blessed Sacrament has been desecrated and our Eucharistic Lord has been harmed at the hands of thieves,” said Bergie in the letter. “When this happens, the Church in her wisdom asks that we make reparation for the harm that has been done.”

In addition to the prayer, Bergie requested that the priests of his diocese celebrate a Mass in honor of the Blessed Sacrament once a week.

The text of the prayer, published by the bishop Sept. 12, addresses the Trinity, acknowledges the “outrages” committed against the presence of Christ in the sacrament, and offers prayers for the conversion of sinners.

“I offer Thee the most precious Body, Blood, Soul and Divinity of Jesus Christ present in all the tabernacles of the world, in reparation for the outrages, sacrileges and indifferences by which He is offended. By the infinite merits of the Sacred Heart of Jesus and the Immaculate Heart of Mary I beg the conversion of poor sinners. Amen.”

Video footage captured two people, believed to be a man and a woman, breaking into the St. Catherine of Alexandria Cathedral in St. Catharines at approximately 4:30 a.m. on September 8. Fr. Donald Lizzotti, the rector of the cathedral, told CNA that he believed the thieves had previously cased the cathedral to determine how to steal the tabernacle.

Bishop Bergie issued a public plea for the return of the tabernacle on the afternoon of Sept. 8, and noted that the steel tabernacle would not have much monetary value. The tabernacle later was discovered partially submerged in a canal in a nearby park by a group of parishioners who formed a search party.

In the September 11 letter, Bergie wrote that he did not believe the thieves were targeting the Eucharist when stealing the tabernacle, and wrote that “I believe the motivation was for money.”

“The video footage seems to support this theory. The first thing the thieves did when they entered the Cathedral was to empty the boxes that contained money for candles and the poor,” said Bergie.

According to Bergie, two pieces of the ciborium were found in the water along with the tabernacle, and that “it is my hope and prayer that the Hosts dissolved in the water.”

A dissolved Eucharist ceases to be a Consecrated Host.

This is not the first time the cathedral in St. Catharines has been targeted by thieves. In 2019, the cathedral was subjected to several thefts and acts of vandalism during its renovation project, and local scrap yards were made aware to look out for objects that may have been stolen from the cathedral.