Our Lady of the Snows 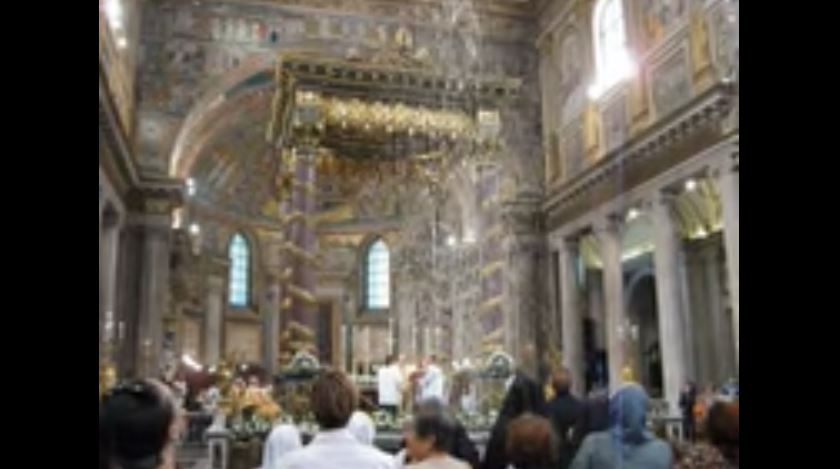 Our Lady of the Snows

Inside the Basilica of Santa Maria Maggiore, high over a side altar, is a beautiful golden bas relief depicting the story.

At the beginning of each of the 10 videos in Bishop Robert Barron’s “Catholicism” series, there is a scene in which thousands of white rose petals drift downwardfrom the ceiling at Rome’s Basilica di Santa Maria Maggiore (St. Mary Major). It’s a breathtaking symbol of the “miracle of the snow”—the rare summer snowfall which, according to legend, fell Aug. 5, 352, on the Esquiline Hill, one of the famed “Seven Hills” of Rome.

It’s a scene that’s recreated each year on Aug. 5,when the Basilica celebrates the feast of Our Lady of the Snows. First, the petals fall from the ceiling during Mass; then, as night falls on the city, there is a simulated “snowfall” in the square outside the Basilica, with sound, light and artificial snow.

During the pontificate of Liberius, the Roman patrician John and his wife, who were without heirs, made a vow to donate their possessions to the Virgin Mary. They prayed that she might make known to them how they were to dispose of their property in her honour. On Aug. 5, at the height of the Roman summer, snow fell during the night on the summit of the Esquiline Hill. In obedience to a vision of the Virgin Mary which they had the same night, the couple built a basilica in honour of Mary on the very spot which was covered with snow.

From the fact that no mention whatever is made of this alleged miracle until a few hundred years later, not even by Sixtus III in his eight-line dedicatory inscription … it would seem that the legend has no historical basis.” The legend is first reported only after the year 1000. It may be implied in what the Liber Pontificalis, of the early 13th century, says of Pope Liberius: “He built the basilica in his own name (i.e., the Liberian Basilica) near the Macellum of Livia.” Its prevalence in the 15th century is shown in the painting of the Miracle of the Snow by Masolino da Panicale.

So the story may be only a pious legend;but inside the beautiful Basilica of Santa Maria Maggiore, high over the side altar in the left transept, is a beautiful golden bas relief depicting the story. But there is more, besides its Byzantine imagery, to attract visitors to the basilica: Beneath the altar is aconfessiowith a kneeling statue of Pope Pius IX. Beneath that, St. Jerome, Doctor of the Church, is buried in what is called the “Bethlehem Crypt,” a lower-level crypt which is designed to simulate the cave where Jesus was born.

In the National Museum and Gallery of Capodimonte in Naples, Italy, there hangs a triptych of Pope Liberius with a small snow shovel, marking the spot where a chapel should be erected honoring the Virgin Mary.And in the video above, filmed at the Basilica of St. Mary Major during the Gloria on the feast of Our Lady of the Snows, the rose petals fall.