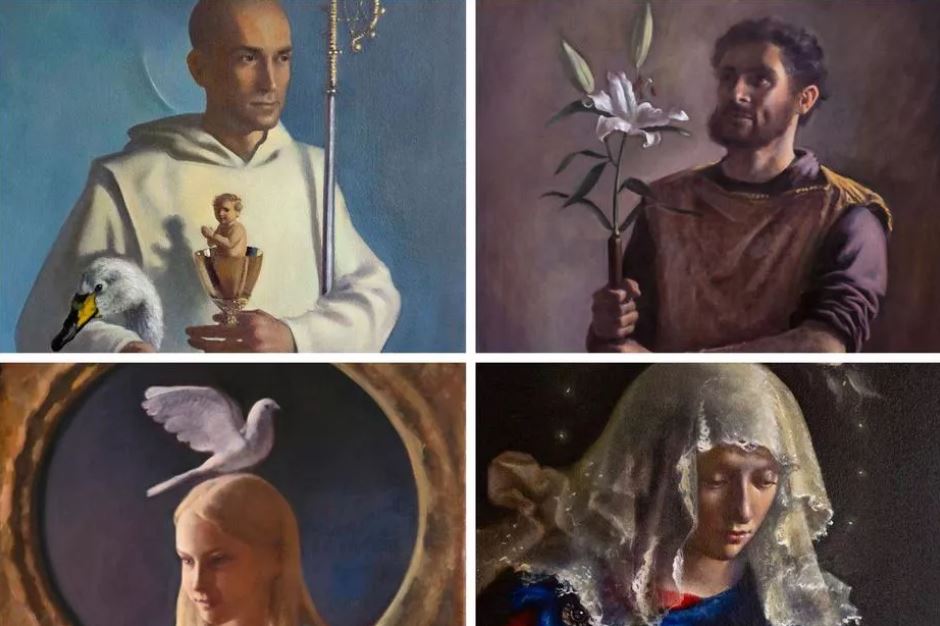 The saints have a great friend in a contemporary sacred artist.

The saints have a great friend in contemporary sacred artist Gwyneth Thompson-Briggs. In her studio in St. Louis, she paints primarily in oils in the time-honored Western tradition. Her works, including devotional portraits, altarpieces and Stations of the Cross, are on display in churches, schools and private homes in America and Europe.

Her portraits of saints easily draw viewers into her work, prompting them to think about each saint, and opening them up to prayer.

Thompson-Briggs has painted her whole life but began serious study in 2013. She has pursued sacred art full time since 2019.

Through her work she is introducing the faithful to such saints as Hugh of Lincoln, a 12th-century Carthusian bishop in England who was a reformer, rebuilt Lincoln Cathedral, and was hugely popular until the Reformation.

A magnetic figure in Thompson-Briggs’ painting, St. Hugh appears peacefully composed in contemplation. Shown holding a chalice in which a prayerful, smiling Child Jesus stands, the saint’s depiction also highlights Hugh nestling a swan under one arm. Thompson-Briggs explains the significance of the imagery: The Child Jesus in the chalice depicts a Eucharistic miracle. God had sent an unknown young cleric to deliver an important message to St. Hugh about reforming the sins of the clergy. The divine mission of the cleric was established when only he and St. Hugh saw the Child Jesus hovering in the chalice at the bishop’s Mass.

As for the swan, the creature would sleep on his pillow and hide his head in the bishop’s sleeve while the bishop worked. “Early chroniclers of St. Hugh saw the swan as a sign of Hugh’s strong and pure soul,” the artist explained.

“I take the time to do a lot of research into the life of the saint before I start painting,” she told the Register of her technique to convey sacredness and beauty in her paintings. “And whenever I paint a saint, it’s important to get real props. For St. Hugh of Lincoln, I couldn’t get a Carthusian habit, so I borrowed a Dominican one. I sketched some of the chalices and a crozier at my parish, and for Baby Jesus I used one of my children who was about the right age.” She visited an Audubon Center to sketch a stuffed swan.

“I begin by working as completely from life as possible,” she said. “I try not to rely on photographs of the saint. With photos you lose so much of the liveliness of the scene, and the lighting is always false. I think in sacred art today there is sometimes the danger of a saint looking like they were copied from a photograph. This is often unattractive to look at and can also tend to desacralize the saint.” To avoid this, she uses multiple models for the same figure and always completes the painting without the models present. “I borrow different features from each model so that the finished depiction is very much idealized. This is the traditional method employed during the Renaissance and antiquity. It also seems to me an application of the Thomistic dictum that grace builds on nature.”

Costumes receive the same treatment. “Every time someone puts the costumes on, the folds move. I’ll say, ‘That’s a different, beautiful fold’ and think, ‘I’ll keep that one.’ You’re able to get a much more beautiful and complete composition than if you just relied on a single photo.”

Of course, well-known saints appear in her paintings, too, including St. Joseph. Her depiction portrays him as a masculine, humble laborer in his early 30s. On his belt are his tools, a hammer and level. With both hands he holds a staff blooming with a large lily, one of his symbols, a nod to his purity. Joseph holds the staff as if it were a sword or a processional candle.

Thompson-Briggs shared that this painting of St. Joseph “is really special to me.” It was a gift for the Benedictines of Mary, Queen of the Apostles Monastery in Gower, Missouri, upon opening their first foundation, St. Joseph’s Monastery, in Ava, Missouri. “One of my children’s godmothers is part of the community. We wanted to give them this gift in gratitude.”

When looking for a primary model for Joseph, she recalled, “The solution, I realized, was right in front of me. My older brother Schuyler modeled for St. Joseph, and the tunic he was wearing was from a costume my mother had made for him years ago. It was really special to have him pose for St. Joseph.”

After the nuns received the painting, someone who saw it contacted them and said it was incredible what Thompson-Briggs had done with the lilies, noting that they looked like the American Sign Language sign for “I love you.”

Thompson-Briggs was surprised because she “had not intended that at all,” but realized “that must have providentially occurred.” She used live lilies to work from, and “the lily was opening and kept changing shape as I was painting,” she explained.

Her painting of St. Catherine of Siena depicts the doctor of the Church as a young girl. Shown with a gentle smile, the saint is depicted in prayer while a white dove with outstretched wings rests atop her head. Thompson-Briggs says this painting reflects a story of what happened when Catherine’s father wanted her to work one day. When he entered her room to get her, he saw a dove suspended over her head, and “he realized it was the Holy Ghost and left her alone.” The artist said she first learned about St. Catherine in a book, then got to know her better through painting her, and was finally able to visit her rooms and venerate the relic of her head in Siena.

Another work focuses on the Holy Innocents, who are “anonymous saints,” as the artist explained. “We don’t know their names. It was my hope when I painted these that they would be special saints for the pro-life cause. They’re also an example of how anyone can be a saint, even the most hidden of us. You don’t have to do extraordinary things. We’re all called to holiness and to be saints even from the first moment of conception.”

One of her favorite saints was not painted in oils. A priest friend on his way to a private audience with Pope Emeritus Benedict XVI wanted to give him a little gift and asked Thompson-Briggs to do a painting of St. Augustine. With only a few weeks’ notice, there was not enough time to do an oil painting, which can take weeks to dry. So the artist turned to watercolors instead.

In New Hampshire at the time, she was able to borrow a miter and pontifical gloves from the diocesan archives, and her pastor lent her a cope (hooded vestment). Augustine is shown wearing the black Augustinian habit and holds his symbol of a glowing heart in the 8-inch by 5-inch work.

On the other end of the size spectrum, her recent painting for Ascension parish’s school in Chesterfield, Missouri, is more than 8 feet tall and 6 feet across. In her painting, the figure of the ascending Christ is ensconced in flowing gold robes, while the Blessed Mother, St. Mary Magdalen, St. Peter in green holding the keys, and St. John in red, look on. Focusing on John’s garment, she explained that “often he is depicted in red. It’s really important for me to make every painting in continuity with Western art. As with doctrine, the true art of painting develops, but never contradicts, the canons of beauty.”

For this particular painting, she pointed out the blessings of having the lumber for building the canvas delivered on St. Joseph’s feast day. “He’s our special patron,” Thompson-Briggs said. “St. Joseph seems to always have a hand in what we’re doing in our family and business.”

In addition to painting, Thompson-Briggs and husband Andrew formulated and taught a course on beauty for several years when they served as visiting fellow and artist-in-residence at Thomas More College of Liberal Arts in Merrimack, New Hampshire.

“I taught the practical studio side, and he taught the philosophical and theological side of beauty,” she said. “It helped the students to see and experience a work of art, to enter into contemplation into a work of art. That’s so akin to stopping what you’re doing and sitting down and praying. I really hope that the course in learning the artwork was also helpful in the spiritual life and in contemplating beauty.”

Thompson-Briggs was partly trained in the atelier (studio) of Boston School master Paul Ingbretson. “The Boston School marries the French Academic tradition with the French Impressionists’ use of color,” she explained. “Studying in that tradition was immensely helpful, especially in learning how to see color and apply paint,” she added, but in her own work she seeks to follow the Southern Baroque tradition. “I absolutely love the Spanish Baroque,” she said, pointing especially to the works of Velasquez, Zurbaran and Ribera. Because no one is teaching this style, she set up her easel in the Boston Museum of Fine Arts and copied canvases directly in order to learn their secrets. “A painter like Ribera understands nature intimately, but he is also able to subordinate what he sees to a higher, mystical vision. That is what I’m trying to do, too.”

The artist hopes that her paintings “draw viewers into greater intimacy with the saints and mysteries depicted.” She says each painting helps her grow in communion with the saints, “forcing me to discover who they are and how they should be depicted.”

The same focus is part of her family life — she and Andrew have three children, who range in age from 32 months old to 4 years old. She said they pray the Rosary daily together and seek friendship with the saints. “We not only pray to our patron saints, but also pray to all the saints we have been depicting in these works of art in gratitude for their assistance in completing these works, which, in these, we’re giving them honor.”

The next saint in the works is St. Gerard Majella, whose medal Thompson-Briggs always wears during pregnancy. “A friend gave me the medal when I was expecting my first child. Now I’ve finally been reading St. Gerard’s life in order to paint him.

And Mary is also a major part of her repertoire.

Thompson-Briggs emphasizes that one of the Madonnas she has painted depicts Mary, Queen of All Saints. “In addition to saints, I regularly paint images of Mary. As Queen of All Saints, I feel an added responsibility to render her beauty in a unique way. In my 2019 Madonna of the Crown of Roses, I looked to both Gothic and Baroque sources for inspiration on how to paint her garments in such a way that the lace and taffeta glowed with a heavenly light. Sacred artists are always doomed to fall short when it comes to depicting the beauty that awaits us in heaven. All we can do is provide a hint of things to come.”