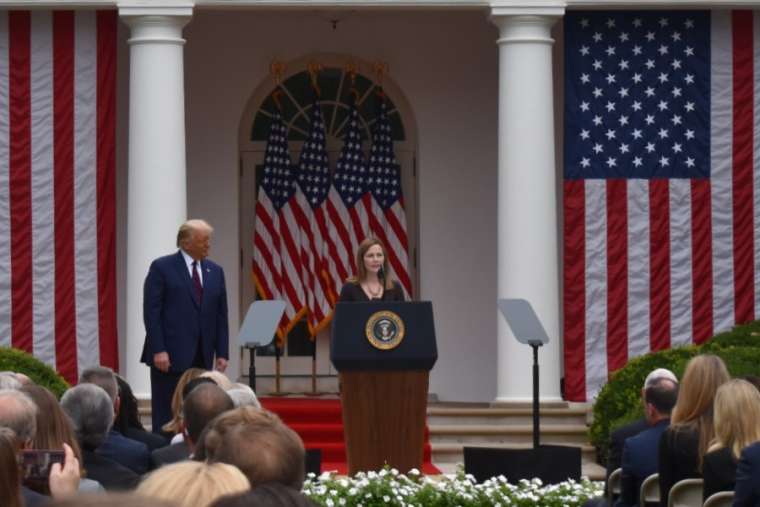 Following President Donald Trump’s nomination of Judge Amy Coney Barrett to the Supreme Court on Sept. 26, party leaders are at odds over the nomination process, and over Barrett as a nominee.

Republicans have rallied around Barrett as a strict constitutionalist, while highlighting her personal commitment to faith and family. Democrats have argued she is ajudicial ideologue aiming to upset the court on issues like the Affordable Care Act and abortion.

Barrett, a Catholic mother of seven, rose to national prominence during her confirmation process for the U.S. Court of Appeals in 2017, when she was questioned on her faith by Sen. Diane Feinstein (D-Calif.), who observed to Barrett that“the dogma lives loudly within you.”

In a Sunday press call, Trump campaign officials pointed to that moment as evidence of what is to come in the nomination process. Justin Clark, Trump’s deputy campaign manager, called Barrett’s character and qualifications to serve as a justice “unimpeachable.”

Clark said Barrett’s Catholic faith might face “religious bigotry” in the weeks ahead.

“The stakes in this nomination couldn’t be higher,” Clark said, adding, “Because our faith as Catholics is under attack currently, and it is going to ramp up and get even worse.”

Clark called Biden, who is a baptized Catholic, “dead silent,” on attacks on Barrett’s faith.

“Just like he was silent when his administration persecuted the Little Sisters of the Poor, or when his own vice presidential nominee Kamala Harris disqualified someone based on their membership to the Knights of Columbus,” Clark said.

Meanwhile, many Democrats noted that arguments in a Supreme Court case that seeks to overturn the Affordable Care Act—former President Barack Obama’s signature health care law—are scheduled for November 10, a week after the November 3 election.

According to the Washington Post, in three years on the U.S. Court of Appeals for the 7th Circuit, Barrett has not considered any cases that directly dealt with the ACA. However, prior to her nomination to her current role, Barrettwrote an essayarguing that Chief Justice John Roberts, who wrote the majority opinion the first time the high court upheld the ACA, “pushed the Affordable Care Act beyond its plausible meaning to save the statute.”

In a tweet, Democratic presidential nominee Joe Biden called Barrett “a jurist with a written track record of disagreeing with the Court’s decision to uphold the Affordable Care Act.”

“Vote like your health care is on the ballot — because it is,” the former vice president added.

Inlivestreamed remarkson Sunday, Biden added that if Barrett is confirmed, women “could lose their bedrock rights enshrined in Roe vs. Wade,” the Supreme Court case that legalized abortion nationwide, which Biden has committed to enshrining in federal law, if elected.

Since Barrett was announced as the nominee on Saturday, Senate Republicans have praised qualifications, which include clerking for the late Supreme Court Justice Antonin Scalia, and working as a professor at Notre Dame Law School before becoming a federal judge.

“Judge Amy Coney Barrett is an exceptionally impressive jurist and an exceedingly well-qualified nominee to the Supreme Court of the United States,” McConnell said.

Senate Democrats, including the party’s vice presidential nominee Kamala Harris, echoed Biden’s characterization of Barrett as an enemy of the Affordable Care Act.

Ina tweet, Harris (D-Calif.), who is also a member of the Senate Judiciary Committee, said, “From day one, Trump made clear that he had a litmus test for Supreme Court Justices: destroy the ACA’s protections for people with preexisting conditions and overturn our right to make our own health care decisions.”

Senate Minority Leader Chuck Schumer (D-N.Y.)said in a tweet, “Make no mistake: A vote for Judge Amy Coney Barrett is a vote to eliminate health care for millions of Americans and to end protections for Americans with pre-existing conditions in the middle the COVID-19 pandemic.”