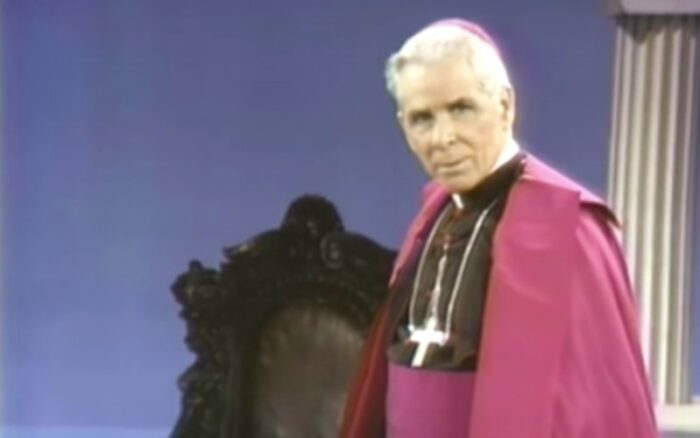 In the talk below, Ven. Abp. Fulton Sheen explains what true patriotism means and how the Founding Fathers defined United States’s liberties.

He also describes much of what is happening in our current world.

“Patriotism is a virtue that was allied to the old virtue of the Greeks and Latin called  ‘Pietas.’ Pietas meant love of God, love of neighbor, love of country. And when one goes out, all go out.

Ven. Sheen then explains his investigation of “the problem of revolution.”

“We started our country with a revolution. Revolution is in the air today. As a matter of fact, the revolutionists of our day are all arguing and contending that, ‘well we started that way, therefore we should continue it.’

Let us investigate this question: Namely, we do live in America, in a revolutionary tradition, certainly. But the question is, what kind of a revolution should we have?

He then tells the story of a Catholic soldier fighting at Concord, who said he went for one reason, “In order that we might govern ourselves.”

“That was the American Revolution–to govern ourselves.” Ven. Sheen says.

“Now, what’s the Revolution of today? What’s its nature? Violence. Violence just for the sake of violence…I mean the new type of revolt that is destruction of everything that is in the past. And these people who are actuating violence today claim they are in line with the American Revolution. They are not!”

Ven. Sheen continues with the explanation of these two types of revolution and the conditions of the preservation of our country.

“The Principles of Which Our Democracy Was Founded”

“The Dignity of Man” & “All Rights and Liberties come to us from God.”

“First he believed that the government must be founded upon the respect of the individual. So he investigated: what are the source of our rights and liberties? Where do they come from?

“Where does my right of free speech come from? Or the right of assembly? Or any other right we have? From the will of the majority?

“But [Thomas Jefferson] set it down in the second paragraph of the Declaration of Independence–that it is a self-evident principle that the Creator–the Creator–has endowed man with certain inalienable rights (inalienable–they cannot be taken away) among which are the right to life, liberty, and the pursuit of happiness. That is our democracy.”

Cardinal Nichols says he has ‘no w...