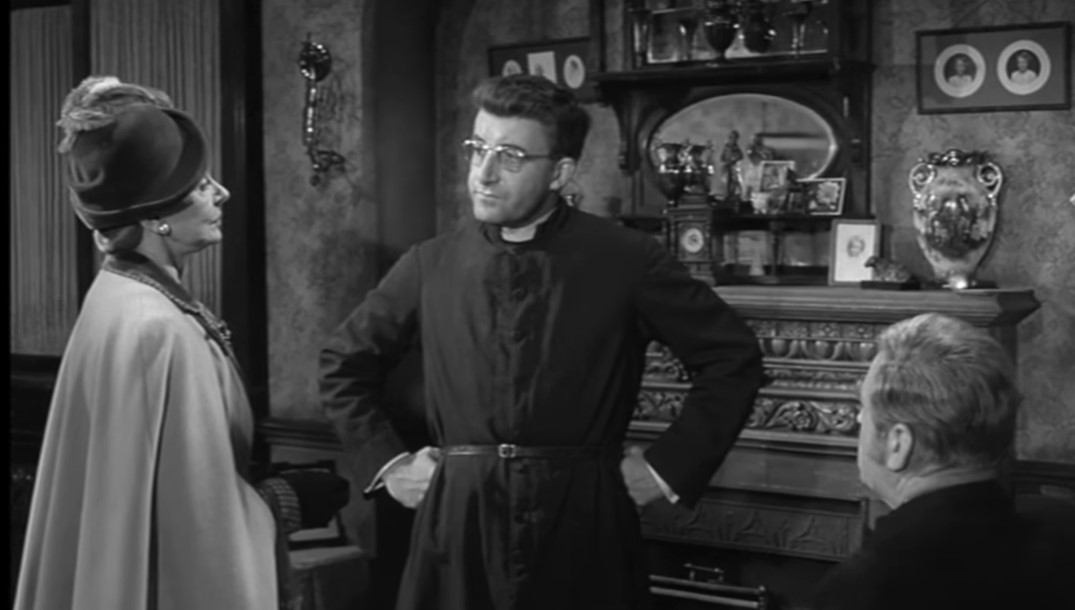 The son of a Jewish mother and Anglican father, Sellers was sent to St. Aloysius College in London, where he received a Catholic education — and a kindly Catholic mentor.

From the late 1950s onwards the English filmmakers known as the Boulting brothers made a series of lighthearted films about the British way of life. Films such as I’m Alright Jack (1959) were satirical, mocking various institutions and the still very-present class system that underpinned them. They proved popular, not least because they appeared at a time when a new and seemingly more egalitarian order appeared to be emerging.

Once they had lampooned the military, labor relations and the Foreign Office, the Boulting brothers turned their attention to organized religion and, in particular, the Church of England. Peter Sellers, not yet the international star that he would become with his The Pink Panther (1963), was to star in the Boultings’ 1963 film, Heavens Above!

Heavens Above! is a small, very British comedy. Most of the characters are well-worn stereotypes: hypocritical churchgoers, made up of the grasping rich and feckless poor, shepherded by an indifferent clergy. Into this mix steps the new vicar, Reverend John Smallwood, played by Sellers, who, as a result of a clerical error, is sent to the (fictional) country town of Orbiston Parva.

Smallwood’s accent is the first thing his new parishioners notice. It is decidedly “common.” His amiable manner, like the man, is soon dismissed as of little consequence. In the Rev. John Smallwood we have an English version of the Holy Fool let loose in England as the new culture of the 1960s took hold.

Soon the world of Orbiston Parva is turned upside down. Housing the homeless in his own rectory, feeding for free anyone who comes along, as well as gently admonishing sinners, Reverend John Smallwood lives the Gospel radically. The church is soon packed. But soon, too, the local business owners are up in arms as the local economy is upended. Something must be done, and so, inevitably, Smallwood’s bishop asks to see his controversial cleric. Thereafter, the problem of Smallwood is solved. The bishop appoints Smallwood the first bishop of Outer Space.

By then, in any case, Smallwood’s experiment in truly living the Gospel has failed miserably. Those he helped prove only ever to have been interested in helping themselves rather than helping bring about the Kingdom. Later, we watch Smallwood, in his role as new bishop, being dispatched to his diocese on a space rocket, having offered himself as a substitute for a would-be astronaut unable to go through with his mission. Smallwood goes to the heavens, still smiling, singing the hymn, Praise My Soul the King of Heaven.

The inspiration for the movie’s plot lay with the then-Anglican, later Catholic convert, Malcolm Muggeridge. Muggeridge had thought up the idea that later became the basis for the script. He makes a cameo appearance in the film. The whole venture was supposed to be a biting satire on the Church of England. The film works more as farce, being a little too mired in stereotype to achieve any satirical impact.

To the role of Smallwood, Sellers brought his particular genius. Much is made of his comedic talent, but he himself saw his gift more as a comic actor rather than a comedian. His performance in Heavens Above! is a perfect example of this. There are few “jokes” in the film because the whole thing is one big joke.

Many actors inhabit their roles, none more so than Sellers. In his playing of Reverend John Smallwood it was to be no different. As always, Sellers took seriously his preparation for the part. In this case, however, he had experience of his own on which to draw. Although his mother was Jewish and his father nominally Anglican, the young Sellers had been sent to a Catholic school, St. Aloysius College in north London, founded in 1879 and then subsequently run by Brothers of Our Lady of Mercy. While there, he had been introduced to Catholicism, learning his catechism with the rest of the boys, and falling under the kindly influence of a religious brother named Brother Cornelius.

Many years later, on the set of Heavens Above! when he had been made up to look like Smallwood, Sellers realized that staring back at him in the mirror was none other than that same Brother Cornelius. The movie star would keep in touch with his former teacher throughout his life — partly, one biographer suggests, because he wanted to acquire something of his former teacher’s certainties and composure. On a number of occasions, especially after his mother died, Sellers even discussed becoming Catholic with Brother Cornelius. Although he would continue to visit his old school, and left a generous financial gift when he did so, Sellers never did become a Catholic.

Sellers died 40 years ago this year. At Sellers’ memorial service in London in 1980, among the wealthy and the famous there was a curious figure — namely, Brother Cornelius, who was no doubt still praying for his former pupil.

‘Coronavirus, Where is Thy Sting?’...