Polish president discusses ‘promotion of the family’ with Pope Francis 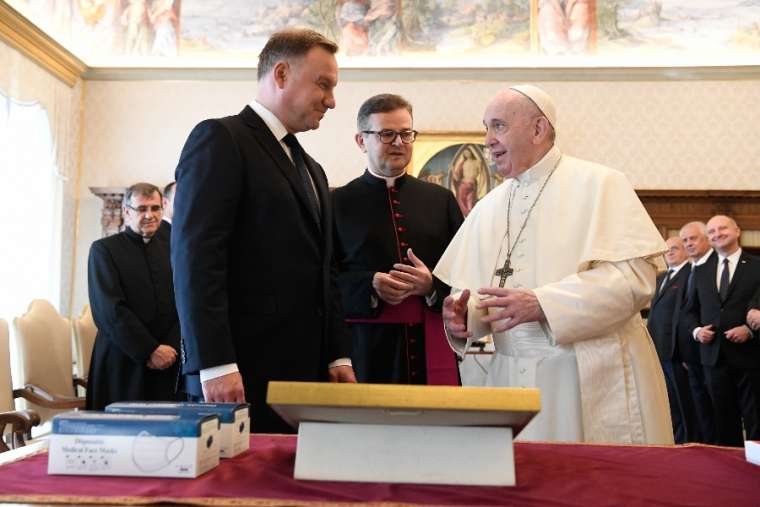 Polish president discusses ‘promotion of the family’ with Pope Francis

The Holy See press office said Sept. 25 that after his audience with the pope, Duda met with Cardinal Pietro Parolin, Vatican secretary of state, and Archbishop Paul Gallagher, Secretary for Relations with States.

“The cordial discussions took place in the context of the centenary of the birth of St. John Paul II and the 40th anniversary of the founding of the independent autonomous trade union Solidarno?? [Solidarity],” the statement said.

“Some topics of mutual interest related to the mission of the Church were discussed, including the promotion of the family and the education of young people.”

“Finally, attention turned to some international issues, such as the current health emergency, the regional situation and security.”

The Polish president’s official websitereportedthat Duda was the first president to be received by the pope since the start of the coronavirus pandemic. His wife, Agata Kornhauser-Duda, also attended the audience.

The president’s website quoted Duda as saying: “The Holy Father, Francis, pointed out that in recent years we have conducted a very effective policy for the family. He thanked me so much for that. I was deeply moved by these thanks.”

While it was not clear precisely which aspects of Poland’s family policy the pope was praising, the government increased child benefits significantly in 2016 with the“Family 500+”program.

Duda, who is associated with the ruling Law and Justice Party (PiS),won a second five-year termas president in Julywith 51.03% of the votes, with his challenger,Warsaw mayor Rafa? Trzaskowski,gaining 48.97%. The margin of victory was422,630 votes in a country with a population of almost 38 million.

In the run-up to the election, Dudasigned a“Family Charter”opposing same-sex marriage and adoption, and committing himself to the “protection of children from LGBT ideology.”

After his meeting with the pope, Duda attended Massat the tomb of St. John Paul II, a native of Poland, in St. Peter’s Basilica. Afterwards, he laid a wreath before the tomb, wearing a black face-covering as protection against the coronavirus.

Duda had intended to travel to Rome May 18 to mark the 100th anniversary of the Polish pope’s birth, but was unable to do so because of the pandemic.

In astatementto journalists outside St. Peter’s Square, Duda said that he had discussed the situation in Belarus with Parolin. The country, which neighbors Poland, has seen widespread demonstrations since a disputed election Aug. 9. Archbishop Tadeusz Kondrusiewicz, president of the Belarusian bishops’ conference, wasprevented from returning to Belarusafter a trip to Poland Aug. 31.

Duda said: “Basically, we had a common opinion that all those who want real democracy, who want freedom, who want to live in an honest state, should be supported — these people should have our support. But, of course, Belarus should decide about itself in free and fair elections.”

What does it mean for Becciu to lo...