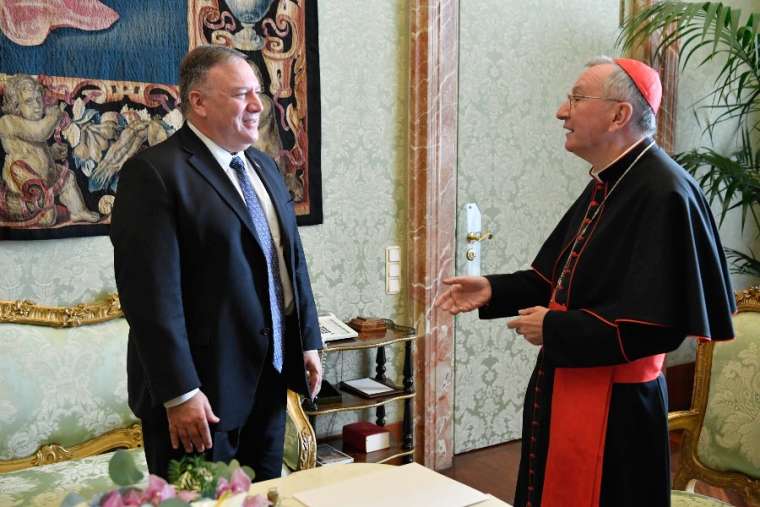 The U.S. Secretary of State Mike Pompeo and the Holy See’s top diplomats had a “respectful” exchange of views on China, the Vatican said Thursday.

He said: “During this morning’s talks … the parties presented their respective positions regarding relations with the People’s Republic of Chinain a respectful, relaxed, and cordial atmosphere.”

“There was also discussion of some areas of conflict and crisis, particularly the Caucasus, the Middle East, and the Eastern Mediterranean. The meeting lasted about 45 minutes.”

The meeting, also attended by Callista Gingrich, U.S. Ambassador to the Holy See, took place the day after Pompeospokeat a symposium on religious freedom in Rome.

“Nowhere is religious freedom under assault more than it is inside of China today,” the secretary said Sept. 30, appealing for the Church to speak out onbehalf ofthose whose religious freedom is being curtailed.

Pompeo’s intervention came as the Vatican prepared torenew its provisional agreementwith China over the appointment of bishops. The deal, signed in 2018, will expire Oct. 22.

In a Sept. 18 essay at First Things, Pompeoarguedthat the agreement had failed to protect Catholics from the Chinese Communist Party’s crackdown on believers.

The Italian newspaper La Stampa reported that, after Wednesday’s symposium on religious freedom, Gallagher affirmed that Pompeo’s visit sought to exploit the pope during the U.S. election campaign. But journalists present when the comments were made said that it was the reporter, not the archbishop, who used the word “exploit.” Gallagher responded by saying: “Well, that’s one of the reasons why the Holy Father is not receiving the Secretary of State.”

While the pope does not always meet with foreign ministers visiting the Vatican, the Holy See has reportedly told U.S. diplomats that the pope did not want to meet with an American political figure so close to the November presidential election.

The U.S. Secretary of State, an evangelical Christian, also met members of the Catholic Community of Sant’Edigio Oct. 1. The Italian daily newspaper Avvenire reported that Pompeo praised the community for its peace-making work, especially in South Sudan.

“It is an honor for me to be here, a real blessing,” Avvenire quoted Pompeo as saying.

Who was Carlo Acutis? A CNA Explai...

St. Thérèse of Lisieux and the Mur...