Pompeo: Nowhere is religious freedom more under assault than in China 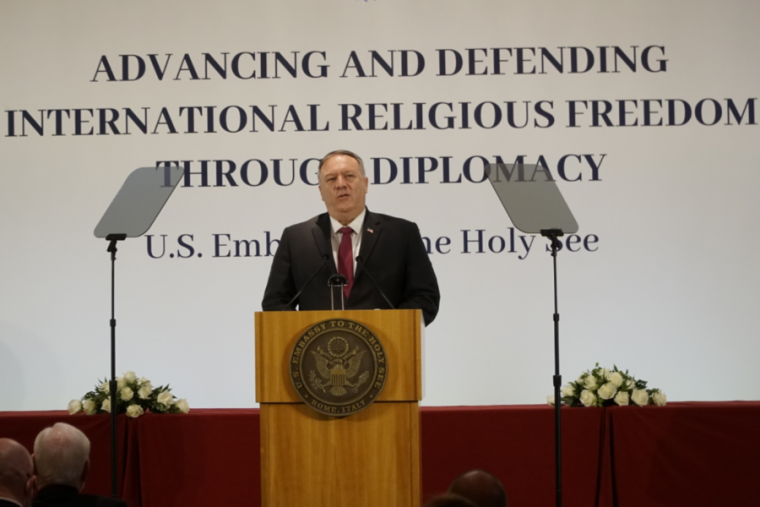 Pompeo: Nowhere is religious freedom more under assault than in China

U.S. Secretary of State Mike Pompeo said in Rome Wednesday that the Chinese government is the world’s worst persecutor of religious believers and that the Church is in a unique position to stand up for those whose religious freedom is being oppressed.

“Nowhere is religious freedom under assault more than it is inside of China today,” Pompeo saidSept. 30.

“The United States can and does play its part in speaking up for those oppressed, although we too can do more. … But for all that nation-states can do, ultimately, our efforts are constrained by the realities of world politics. … The Church is in a different position. Earthly considerations shouldn’t discourage principled stances based on eternal truths. And as history shows, Catholics have often deployed their principles in glorious, glorious service of human dignity,” the secretary added.

The U.S. Secretary of State’s remarks at a religious freedom symposium came aday before he wasexpected to meet with Cardinal Pietro Parolin at the Vatican to discuss the renewal of the Holy See’s provisional accord with China.

Parolin, the Vatican Secretary of State, told journalists at the end of the conference that he was “surprised” that the U.S. official decided topublish an articleon the Holy See’s provisional accord with China before his visit.

“We have known for a long time the position of the Trump administration and that of Secretary Pompeo on this subject,” the cardinal added.

The cardinal said that the Vatican haddecided to move forward with the agreement with China after thoughtful reflection and many years working toward the provisional accord.

“We know that there is a lot of resistance … a lot of criticism,” Parolin said.

When asked by journalists if he expectedthat the Vatican-China deal wouldresult in greater religious freedom in China, Parolin replied: “We are for the policy of small steps… With the policy of small steps, we believe that … even if at the beginning it does not seem to give great results, however, it is a step towards, in other words, the affirmation of greater religious liberty.”

Pompeotold CNAbefore his visitthat he plannedto use the meeting with Vatican officials to discuss human rights abuses in China and to urge the Vatican to speak out about Chinese religious persecution.

“We’ve spoken pretty clearly about the human rights situation in China that has deteriorated under General Secretary Xi Jinping for religious believers throughout the country,” Pompeo told CNA in an exclusive interview on Sept. 25.

“The Church has an enormous amount of moral authority and we want to encourage them to use that moral authority, to improve the conditions for believers, certainly Catholic believers, but believers of all faiths inside of China, and so that’s the conversation that we’ll have,” he said.

Speaking at the event organized by the U.S. Embassy to the Holy See Sept. 30, Pompeo urged faith leaders to “find the courage to confront religious persecution.”

The U.S. Secretary of State pointed to Fr. Bernhard Lichtenberg — a Catholic priest who during World War II resisted the Nazi regime and helped Jewish families — and to the Chinese martyrs and missionaries canonized by St. John Paul II as examples of a “bold moral witness.”

“An increasingly repressive CCP frightened by its own lack of democratic legitimacy works day and night to snuff out the lamp of freedom, especially religious freedom on a horrifying scale,” Pompeo said.

“Nor, of course, have Catholics been spared this wave of repression. Catholic churches and shrines have been desecrated and destroyed. Catholic bishops, like Augustine Cui Tai, have been imprisoned … and Catholic lay leaders in the human rights movement, not least in Hong Kong have been arrested,” the U.S. diplomat added.

Immediately following Pompeo’s remarks, Archbishop Paul Gallagher, the Vatican Secretary for Relations with States,gave a speech focused on the importance of protecting freedom of conscience in the West.

The Italian newspaperLa Stampareported that afterwards Gallagher affirmed that Pompeo’s visit sought to exploit the pope during the U.S. election campaign.Butjournalists present when the comments were made said that it was the reporter, not the archbishop, who used the word “exploit.”Gallagher responded by saying: “Well, that’s one of the reasons why the Holy Father is not receiving the Secretary of State.”

While the pope does not always meet with foreign ministers visiting the Vatican, the Holy See has reportedly told U.S. diplomats that the pope did not want to meet with an American political figure so close to the November presidential election.

Cardinal Parolin (pictured above) was not present at the symposium when Pompeo gave his speech, but came later to deliver the closing remarks, in which he did not mention China.

Parolin said earlier this month that the Vatican’s two-year provisional agreement with China hadnot expired and wouldnot do so until October. The cardinal said that the Vatican expectedto renew the interim deal on the appointment of bishops and that he hopedthat the Chinese hadthe same intention.

The symposium in Rome focused on diplomatic tools to advance religious freedom, and included panel discussions with the U.S. Ambassador at Large for International Religious Freedom Sam Brownback and Msgr. Khaled Akasheh.

In his comments at the conference, Ambassador Brownback said: “I believe the key to peace … is the protection of religious freedom for all.”

Pompeo said that, as a Protestant Christian, he had been struck by Pope Francis’ call to be a Church permanently in a state of mission.

“Pope Francis has exhorted the Church to be ‘permanently in a state of mission.’ It’s a hope that resonates with this evangelical Protestant who believes, as the Holy Father does, that those of us given the gift of Christian faith have an obligation to do our best to bless others,” he said.

“I’m humbled too by those of you here who have spent your entire lives in service of God in full-time pastoral ministry, makes my job look easy,” the U.S. Secretary of State said.