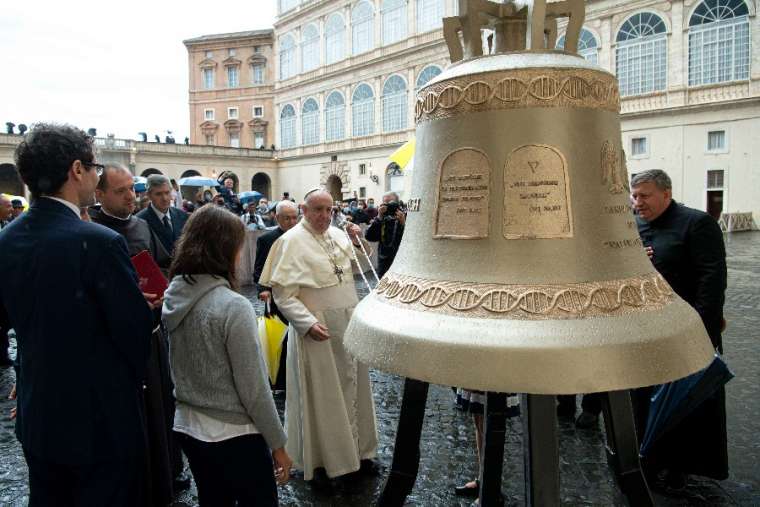 Pope Francis blessed a large bell Wednesday that Polish Catholics hope will ring out in the defence of unborn life.

“May its ring awaken the consciences of legislators and all peopleof good will in Poland and the whole world,” Pope Francis said Sept. 23.

The Voice of the Unborn bell, commissioned by the Yes to Lifefoundation, is a symbolic bell to be used atPoland’s March for Life and other pro-life events. It is decorated with a cast an ultrasound image of an unbornchild and a quotationfrom Blessed Jerzy Popie?uszko: “A child’s life begins under the mother’s heart.”

In addition, the bell featurestwo tablets, symbolizing the Ten Commandments. On the first are the words of Jesus,“Do not think that I have come to abolish the law”(Matthew 5:17), and on the second is the commandment,“You shall not kill”(Exodus 20:13).

Pope Francis was the first person toring the symbolic bell after giving it his blessing in a courtyard in Vatican City after hisgeneral audience.

The pope noted that the bell would“accompany events aimed at remembering the value of human life from conception to natural death.”

The bell weighs more than 2,000 pounds and is nearly fourfeet in diameter. It was cast from bronze Aug. 26 atthe Jan Felczy?ski bell foundry in the southeastern city of Przemy?l, in the presence of civil and Catholic leaders, according to Polish media.

After its return from Rome to Poland, the bell will be installed at All Saints parish in Kolbuszowa, but will soon be transported again for use in Poland’s March for Life, planned to take place in October in Warsaw.

“This bell is meant to stir consciences. The idea of ??casting it was born at the beginning of this year, when I read the information that 42 million children in the world are killed every year as a result of abortion,” Bogdan Romaniuk, vice president of the Polish Yes to Lifefoundation,toldthe Polish Catholic weekly Niedziela.

In Poland, the law allows abortion only in cases of rape, incest, threat to the mother’s life, or fetal abnormality. About 700 to 1,800 legal abortions take placeeach year.

Dr. Bogdan Chazan, the foundation’s president, said that he hopedthe sound of the bell wouldserve as a “call to prayer” for the protection of unborn children.