Pope Francis calls for day of prayer and fasting for Lebanon 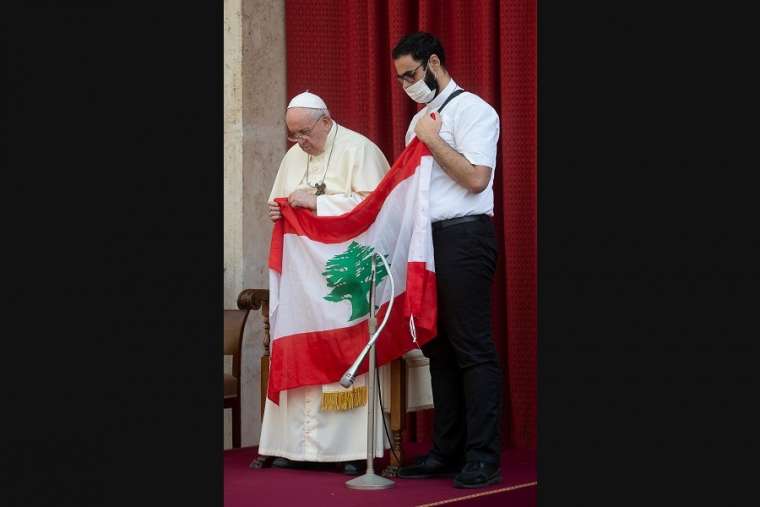 Pope Francis calls for day of prayer and fasting for Lebanon

At the end of his general audience Wednesday, Pope Francis made a lengthy appeal for peace and harmony in Lebanon, asking people around the world to spend a day in prayer and fasting for the Middle Eastern country.

“For over a hundred years, Lebanon has been a country of hope. Even during the darkest periods of its history, the Lebanese have kept their faith in God and demonstrated the ability to make their land a place of tolerance, respect and coexistence unique in the region,”he said.

“For the good of the country itself, but also of the world, we cannot allow this heritage to be lost.”

Francis said that he wantedFriday, Sept. 4, to be a universal day of prayer and fasting for Lebanon, and invited people of all religions to join in.

He also said he wouldbe sendingCardinal Pietro Parolin,the Vatican Secretary of State,to Lebanon Sept. 4 as his representative, “to express my closeness and solidarity.”

“We offer our prayers for all of Lebanon and for Beirut,”he said. He closed by asking everyone to stand for a moment of silent prayer.The pope made his appeal at his first public general audience since the outbreak of coronavirus in Italy over six months ago. The meeting was held with additional security measures in the San Damaso Courtyard inside the Vatican. More than 500 pilgrims were present.

Pope Francis greeted people as he entered the courtyard, and kissed a Lebanese flag held by a priest.

Later, the pope asked the Lebanese priest, Fr. Georges Breidi, to join him on the platform while he gave his nearly 700-word appeal. Afterward, Breidi thanked Pope Francis for his words, saying “we very much need your support and the support of the universal Church.”

“We cannot continue to live like this in Lebanon,” he added, noting, with emotion in his voice, the large number of Christians who are leaving the country.

“We need your prayers, your support, and your fraternal love. And we await you to bless our beloved land,” the priest told Pope Francis, before embracing him.

Breidi spoke to CNA about his experience immediately afterward: “I really can’t find the right words to say, however, I thank God for this great grace he gave me today.”

“[The pope] asked me if I wanted to say a word of thanks, that which I gave at the end. I hadn’t prepared in advance — I don’t know what I said.”

Sept. 1 marked 100 years since the creation of the State of Greater Lebanon. The country is almost evenly divided between Sunni Muslims, Shia Muslims, and Christians, most of whom are Maronite Catholics. Lebanon also has a small Jewish population, as well as Druze and other religious communities.

Lebanon’s capital city,Beirut, experienced a large explosion in its port area Aug. 4. The blast, caused by the detonation of a large amount of ammonium nitrate, killed nearly 200 people and injured thousands. It also caused extensive damage to homes and businesses around the area.“In particular, I address the inhabitants of Beirut, severely tested by the explosion: take courage, brothers! Faith and prayer be your strength. Do not abandon your homes and your heritage, do not let the dreams of those who have believed in the future of a beautiful and prosperous country fall,”Pope Francis said.

He also urged priests and bishops in Lebanon to accompany their faithful, asking bishops especially to have “apostolic zeal”and to live in “poverty with your poor people who are suffering.”

“Help your faithful and your people to stand up and be protagonists of a new rebirth,”he added.

The pope emphasized the importance of peace, harmony, and brotherhood as a foundation for ensuring the continued presence of Christians in Lebanon and throughout the Middle East.

He quoted St. Pope John Paul II’s 1989 letter to bishops on the situation in Lebanon, which said, “faced with the repeated tragedies that each of the inhabitants of this land knows, we become aware of the extreme danger that threatens the very existence of the country. Lebanon cannot be abandoned in its solitude.”

Francis urged political and religious leaders to commit to reconstruction work in Beirut with transparency and with the common good in mind. He also asked the international community to continue its support.

“I ask you to entrust our anxieties and hopes to Mary, Our Lady of Harissa. May she support those who mourn their loved ones and instill courage in all those who have lost their homes and part of their lives with them,”he prayed.

“May she intercede with the Lord Jesus, so that the Land of the Cedars may flourish again and spread the perfume of living together throughout the Middle East region,” he said.