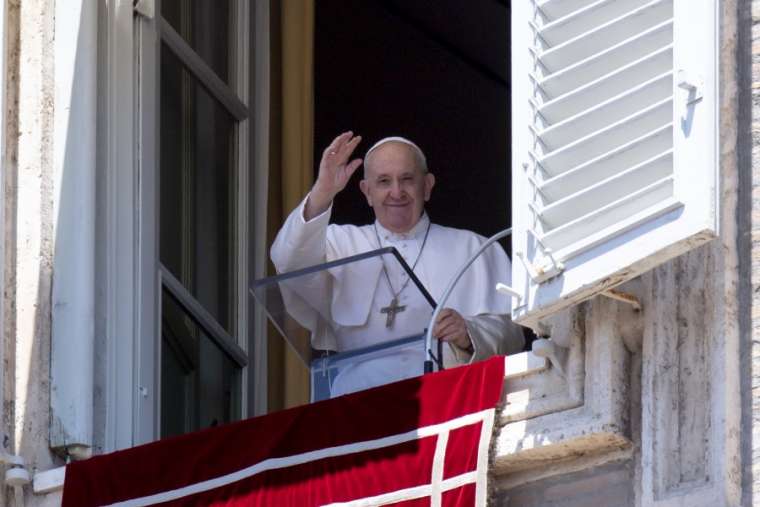 Speaking from a window overlooking St. Peter’s Square Aug. 23, the pope said: “Christian charity is not simple philanthropy but, on the one hand, it is looking at others through the eyes of Jesus Himself and, on the other hand, seeing Jesus in the face of the poor.”

In hisaddress, the pope reflected on the day’s Gospel reading (Matthew 16:13-20), in which Peter professes his faith in Jesus as the Messiah and Son of God.

“The Apostle’s confession is provoked by Jesus Himself, who wishes to lead His disciples to take the decisive step in their relationship with Him. Indeed, the entirety of Jesus’s journey with those who follow Him, especially with the Twelve, is one of educating their faith,” he said, according to an unofficial Englishtranslation provided by the Holy See press office.

The pope suggested that, in answer to the first question, the apostles seemed to compete in reporting different opinions, perhaps sharingthe view that Jesus of Nazareth was essentially a prophet.

When Jesus posed the second question to them, there appeared to be “a moment of silence,” the pope said, “as each one of those present is called to put themselves on the line, manifesting the reason why they follow Jesus.”

He continued: “Simon takes them off the hook by declaring forthrightly, ‘You are the Messiah, the Son of the living God’ (v. 16). This answer, so complete and enlightening, does not come from an impulse of his own, however generous — Peter was generous — but rather is the fruit of a particular grace of the heavenly Father. Indeed, Jesus Himself says, ‘This was not revealed to you by flesh and blood’ — that is, by culture, what you have studied, no this has not revealed it to you. It was revealed to you ‘by my Father in heaven’ (v. 17).”

“To confess Jesus is a grace of the Father. To say that Jesus is the Son of the living God, who is the Redeemer, is a grace that we must ask for: ‘Father, give me the grace of confessing Jesus.’”

The pope noted that Jesus responded to Simon by declaring: “You are Peter, and on this rock I will build my church, and the gates of Hades will not prevail against it” (v. 18).

He said: “With this affirmation, Jesus makes Simon aware of the meaning of the new name He has given him, ‘Peter’: the faith he has just shown is the unshakable ‘rock’ on which the Son of God wishes to build His Church, that is, community.”

“And the Church goes forward always on the basis of Peter’s faith, that faith that Jesus recognizes [in Peter] and which makes him the head of the Church.”

The pope said that in today’s Gospel reading we hear Jesus putting the same question to each one of us: “And you, who do you say I am?”

We must respond not with “atheoretical answer, but one that involves faith,” he explained, listening to “the voice of the Father and its consonance with what the Church, gathered around Peter, continues to proclaim.”

He then offered a note of caution.

“But beware,” he said,“it is indispensable and praiseworthy that the pastoral care of our communities be open to many forms of poverty and crises, which are everywhere. Charity is always the high road of the journey of faith, of the perfection of faith. But it is necessary that works of solidarity, the works of charity that we carry out, not divert us from contact with the Lord Jesus.”

After reciting the Angelus, the pope noted that Aug. 22 marked the International Day Commemorating the Victims of Acts of Violence Based on Religion or Belief, instituted by the United Nations General Assembly in 2019.

He said: “Let us pray for these, our brothers and sisters, and let us also sustain with our prayer and solidarity those, and there are many, who today are persecuted because of their faith and religion.”

The pope observed that Aug. 24 marks the 10th anniversary of the massacre of 72 migrants by a drug cartel in the municipality of San Fernando, in the Mexican state of Tamaulipas.

“They were people from various countries who were looking for a better life. I express my solidarity with the families of the victims who today are still asking for truth and justice regarding the events. The Lord will hold us to account for all of the migrants who have fallen on their journey of hope. They were victims of the throwaway culture,” he said.

The pope also recalled that Aug. 24 is the fourth anniversary of an earthquake that struck central Italy, killing 299 people.

He said: “I renew my prayer for the families and the communities who suffered the greatest devastation that they may go ahead in solidarity and hope, and I hope that the reconstruction might accelerate so that the people might return to live serenely in this beautiful territory of the Apennine Hills.”

He expressed his solidarity with Catholics in Cabo Delgado, the northernmost province of Mozambique, which has suffered intense violence at the hands of Islamists.

The pope made asurprise phone calllast week to local Bishop Bishop Luiz Fernando Lisboa of Pemba, who has spoken out about the attacks which have displaced more than 200,000 people.

Pope Francis then greeted pilgrims gathered in St. Peter’s Square — both those from Rome and elsewhere in Italy. Pilgrims stood spaced apart in order to prevent the spread of the coronavirus.

He singled out a group of young pilgrims dressed in yellow T-shirts from the parish of Cernusco sul Naviglio in northern Italy. He congratulated them on cycling from Siena to Rome along the ancient pilgrimage route of the Via Francigena.

The pope also greeted families from Carobbio degli Angeli, a comune in the province of Bergamo in the northern Italian region of Lombardy, who had made a pilgrimage to Rome in memory of coronavirus victims.

Lombardy was one of the epicenters of the COVID-19 outbreak in Italy, which has claimed 35,430 lives as of Aug. 23, according to the Johns Hopkins Coronavirus Resource Center.

The pope urged people not to forget those affected by the pandemic.

“This morning I heard the testimony of a family who lost their grandparents without being about to say goodbye to them, on the same day. So much suffering, so many people who lost their lives, victims of this disease; and so many volunteers, doctors, nurses, sisters, priests, who also lost their lives. Let us remember the families who have suffered because of this,” he said.

Concluding his Angelus reflection, Pope Francis prayed: “May Mary Most Holy, blessed because she believed, be our guide and model on the path of faith in Christ, and make us aware that trust in Him gives full meaning to our charity and to all our existence.”