Pope Francis donates an ambulance to aid the homeless 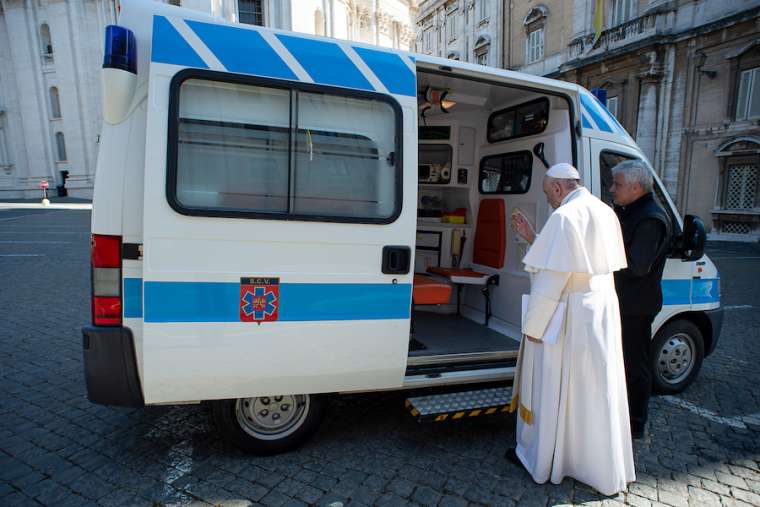 Pope Francis donates an ambulance to aid the homeless

Pope Francis has donated an ambulance that will be set apart to serve Rome’s poor and homeless population in need of emergency medical care.

“It is a new gift from the Holy Father, entrusted to the Office of Papal Charities, in favor of the poorest, in particular of the homeless who face the difficulties of the streets,” a Vatican communique stated June 1. The pope blessed the ambulance before Mass on Pentecost Sunday. The Vatican City ambulance will be used in coordination with the Vatican’s medical aid initiatives for service to the poor, who arrive sick at the Vatican’s homeless shelter and medical clinic.

This is the most recent of Pope Francis’ many initiatives to serve the homeless near the Vatican.

During the coronavirus pandemic, St. Peter’s Square itself became a refuge for Rome’s homeless who could not find a place in the shelter’s across the city.

Despite added risks, the services for homeless men and women near the Vatican continued uninterrupted, including the papal charities-run showers and bathrooms, located under and between the right colonnade and a Vatican wall.

The mobile medical clinic in St. Peter’s Square continued to provide medical care to those in need throughout Italy’s lockdown in the midst of the coronavirus pandemic.

Pope Francis also opened a four-story homeless shelter right off of the St. Peter’s Square colonnade in November. The homeless shelter, staffed by the Sant’Egidio community, has two floors of dormitories that can sleep 50 men and women, a kitchen to provide breakfast and dinner, and a recreation area for fellowship, educational programs, and psychological counseling.

The Vatican statement said that Modesta Valenti served as an inspiration for the papal ambulance dedicated for the homeless. Valenti was a homeless woman who died in front of Rome’s Termini train station on Jan. 31, 1983 after an ambulance refused to take her to the hospital because she had lice.

Rome’s homeless gather to pray and honor those who died on the streets each year with the Catholic community of Sant’Egidio, who organize an annual memorial near the anniversary of Valenti’s death. There are an estimated 8,000 homeless people currently living in Rome.