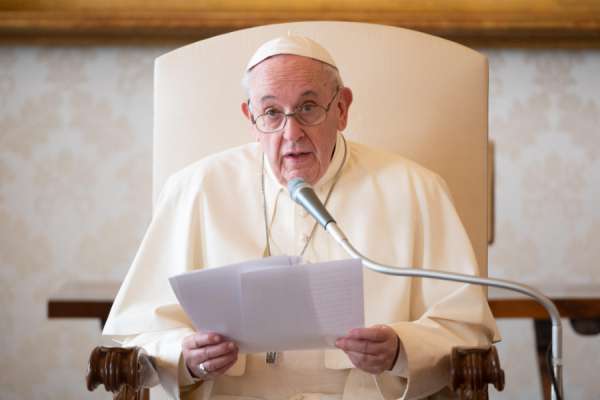 Vatican City, Nov 25, 2020 / 08:30 am (CNA).- Pope Francis has written a note to women in his homeland who asked him to help make known their opposition to a bill to legalize abortion introduced to the legislature by Argentina’s president last week.

Eight women signed a Nov. 18 letter to Pope Francis expressing fear that the abortion bill targets poor women and asking him “to help us by making our voice heard.”

The Argentine daily La Nacion published Nov. 24 the full letter of the women, together with the pope’s Nov. 22 response, which was sent through the national deputy for the City of Buenos Aires, Victoria Morales Gorleri.

In the handwritten note, Pope Francis said that abortion “is not a primarily religious issue but one of human ethics, prior to any religious confession.”

He expressed his gratitude for their letter and said they were women “who know what life is.”

“The country is proud to have such women,” he added. “Please tell them for me that I admire their work and their testimony; that I thank them from the bottom of my heart for what they do, and that they keep going,” he said.

Fulfilling a presidential campaign promise, Argentine president Alberto Fernández introduced a bill to legalize abortion into the country’s legislature Nov. 17. The bill is expected to be debated in December.

In their letter to Pope Francis, the Argentine women, who come from three shanty towns in Buenos Aires, said that the introduction of the bill “once again puts us on the alarm about the future of our families.”

They noted that they began to meet in 2018 amid a national debate to legalize abortion. The women organized demonstrations, made statements to congress, and conducted surveys among their neighbors with results of “more than 80%” opposing abortion.

“Today we are women who work side by side to take care of the lives of many neighbors: the baby that is in gestation and her mother, as well as the one who was born is among us and needs help,” they said.

The women told Pope Francis about being filled with “cold terror” after the abortion bill was introduced to the legislature last week, “just thinking that this project is aimed at adolescents in our neighborhoods.”

“Not so much because in the villa [shanty town] culture abortion is thought of as a solution to an unexpected pregnancy (Your Holiness knows well our way of assuming motherhood between aunts, grandmothers and neighbors),” the women wrote, “but because [the law] is oriented to cultivate the idea that abortion is one more possibility within the range of contraceptive methods and that even the main users must be poor women.”

“This is why we turn to Your Holiness,” they said, “with the desire to ask you to help us express to public opinion that we feel imprisoned in a situation where our own family, our adolescent daughters and future generations are compromised with the idea that our life is the unwanted one and that we do not have the right to have children because we are poor.”

Fernández said Nov. 22 that he hoped Pope Francis would not be angry because of his introduction of the bill to legalize abortion.

Speaking to the Argentine television program Corea del Centro, Fernández, a Catholic, argued that he had to introduce the bill to solve “a public health problem in Argentina.”

The president’s reference to a public health crisis seemed to refer to unsubstantiated claims from abortion advocates in the country, who claim that women in Argentina die frequently from so-called “clandestine” or unsafe illegal abortions in the country. In a Nov. 12 interview, Bishop Alberto Bochatey, who heads the Argentine bishops’ conference healthcare ministry, challenged those assertions.

When asked if the pope would be angry about the initiative, Fernández replied: “I hope not, because he knows how much I admire him, how much I value him and I hope he understands that I have to solve a public health problem in Argentina.”