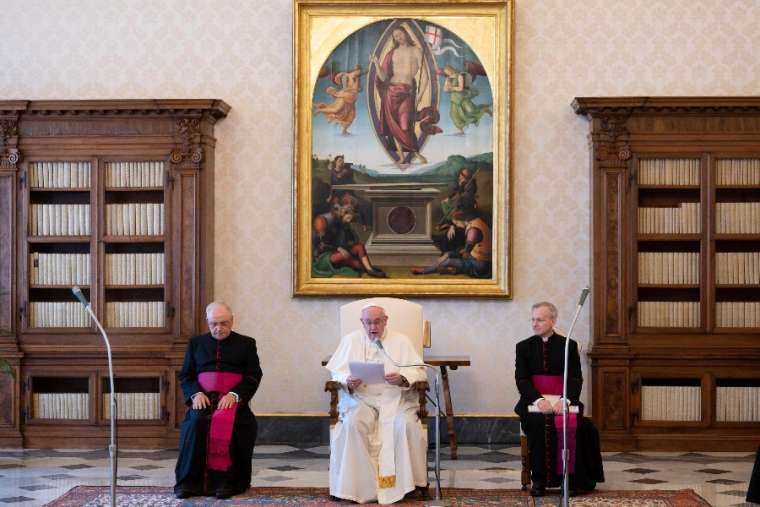 A potential coronavirus vaccine should be made available to all, Pope Francis said at the general audience Wednesday.

“It would be sad if, for the vaccine for COVID-19, priority were to be given to the richest! It would be sad if this vaccine were to become the property of this nation or another, rather than universal and for all,” Pope Francis said Aug. 19.

The pope’s comments followed a warning by the head of the World Health Organization Tuesday that some countries may hoard vaccines.

Speaking in Geneva Aug. 18, WHO Director-General Tedros Adhanom Ghebreyesus appealed to world leaders to avoid what he called “vaccine nationalism.”

In his address, the pope also said it would be a “scandal” if public money were used to bail out industries “that do not contribute to the inclusion of the excluded, the promotion of the least, the common good, or the care of creation.”

He said that governments should only help industries that met allfour criteria.

The pope was speaking in the library of the Apostolic Palace, where he has held his general audiences since the coronavirus pandemic struck Italy in March.

His reflection was the third installment in a new series of catechetical talks on Catholic social teaching, which he began earlier this month.

Introducing his new cycle of catechesis Aug. 5, the Pope said: “In the coming weeks, I invite you to tackle together the pressing issues that the pandemic has highlighted, especially social diseases.”

“And we will do it in the light of the Gospel, the theological virtues, and the principles of the Church’s social doctrine. We will explore together how our Catholic social tradition can help the human family heal this world that suffers from serious diseases.”

In his address Wednesday, Pope Francis focused on the pandemic, which has claimed the lives of more than 781,000 people worldwide as of Aug. 19, according to the Johns Hopkins Coronavirus Resource Center.

The pope called for a twofold response to the virus.

“On the one hand, it is essential to find a cure for this small but terrible virus, which has brought the whole world to its knees. On the other, we must als cure a larger virus, that of social injustice, inequality of opportunity, marginalization, and the lack of protection for the weakest,” the pope said, according to an unofficial working translation provided by the Holy See press office.

The pope cited a passage from the Second Letter to the Corinthians, read out before his address, which said that Jesus “became poor although he was rich, so that by his poverty you might become rich” (2 Corinthians 8:9).

In a similar way, he noted, Jesus’ followers are known by their closeness to the poor.

Referring to St. John Paul II’s 1987 encyclical Sollicitudo rei socialis, he said: “Some mistakenly think that this preferential love for the poor is a task for the few, but in reality it is the mission of the Church as a whole, as St. John Paul II said.”

Service of the poor should not be limited to material assistance, he explained.

“Indeed it implies walking together, letting ourselves be evangelized by them, who know the suffering Christ well, letting ourselves be ‘infected’ by their experience of salvation, by their wisdom and by their creativity. Sharing with the poor means mutual enrichment. And, if there are unhealthy social structures that prevent them from dreaming of the future, we must work together to heal them, to change them.”

He noted that many people were looking forward to returning to normality following the coronavirus crisis.

“Certainly, but this ‘normality’ should not include social injustices and the degradation of the environment,” he said.

The pope urged Catholics to help build an “economy of the integral development of the poor,” which he defined as “an economy where people, and especially the poorest, are at the center.”

This new kind of economy, he said, would avoid “remedies that in fact poison society,” such as the pursuit of profits without the creation of dignified jobs.

“This type of profit is dissociated from the real economy, that which should bring benefits to the common people, and in addition is at times indifferent to the damage inflicted to our common home,” he said.

“The preferential option for the poor, this ethical-social need that comes from God’s love, inspires us to conceive of and design an economy where people, and especially the poorest, are at the center.”

After his address, the pope greeted Catholics belonging to different languages who were following via livestream. The audience concluded with the recitation of the Our Father and the Apostolic Blessing.

Concluding his reflection, Pope Francis said: “If the virus were to intensify again in a world that is unjust to the poor and vulnerable, then we must change this world. Following the example of Jesus, the doctor of integral divine love, that is, of physical, social and spiritual healing — like the healing worked by Jesus — we must act now, to heal the epidemics caused by small, invisible viruses, and to heal those caused by the great and visible social injustices.”

“I propose that this be done by starting from the love of God, placing the peripheries at the center and the last in first place.”

‘The Chosen’ as Scriptural Visual...