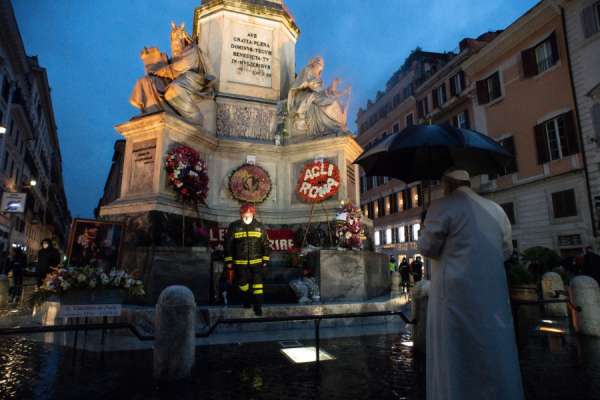 CNA Staff, Dec 8, 2020 / 01:45 am MT (CNA).- Pope Francis made a surprise visit Tuesday morning to the statue of the Immaculate Conception in Rome’s Piazza di Spagna.

The Holy See press office said Dec. 8 that the pope had made a private visit to the statue, days after it announced that he would not make his customary public afternoon visit to the site due to the pandemic.

“At 7 a.m. this morning, on the Solemnity of the Immaculate Conception of the Blessed Virgin Mary, the Holy Father went to the Spanish Steps for an act of veneration in private to Mary Immaculate,” the press office said.

“At the first light of dawn, in the rain, he laid a bouquet of white roses at the base of the column where the statue of Our Lady stands and he turned to Her in prayer, so that she might watch over Rome and its inhabitants with love, entrusting to Her all those in this city and in the world who are afflicted by sickness and discouragement.”

Photographs showed Pope Francis standing at the base of the statue with his head bowed, sheltering beneath a black umbrella in the rain-slicked square.

The press office added that shortly before 7.15 a.m. the pope left the Spanish Steps and traveled to the Basilica of St. Mary Major, where he prayed before the icon of Salus Populi Romani, Mary Protection of the Roman People.

He then celebrated Mass in the Chapel of Nativity, before returning to the Vatican.

The Vatican announced Nov. 30 that, in place of his traditional afternoon public visit, Pope Francis would mark the feast day with “an act of private devotion, entrusting the city of Rome, its inhabitants and the many sick people in every part of the world to Our Lady.”

Holy See press office director Matteo Bruni explained that Francis would not go to the square in the afternoon in order to avoid people gathering and transmitting COVID-19.

Despite pandemic regulations curtailing some Rome customs for the Dec. 8 Solemnity of the Immaculate Conception, Franciscan friars will be praying at the base of the statue throughout the day.

Conventual Franciscans said they would be present in the square to offer a “blessing from afar” to families who pass by on the feast day.

Since 1953, it has been a custom for popes to venerate the statue on the feast day. Pope Pius XII was the first to do so, walking nearly two miles from the Vatican.

Rome’s firefighters are usually in attendance at the prayer, in honor of their role at the 1857 inauguration of the statue. The mayor of Rome and other officials also attend.

Despite the canceled event, firefighters were still expected to place a fresh wreath of flowers on Mary’s outstretched arm in the early morning Dec. 8. To reach the statue, which sits atop a nearly 40-foot high column, they use the ladder of a firetruck.

As is customary for Marian solemnities, Pope Francis is expected to lead the Angelus prayer from a window overlooking St. Peter’s Square Dec. 8.