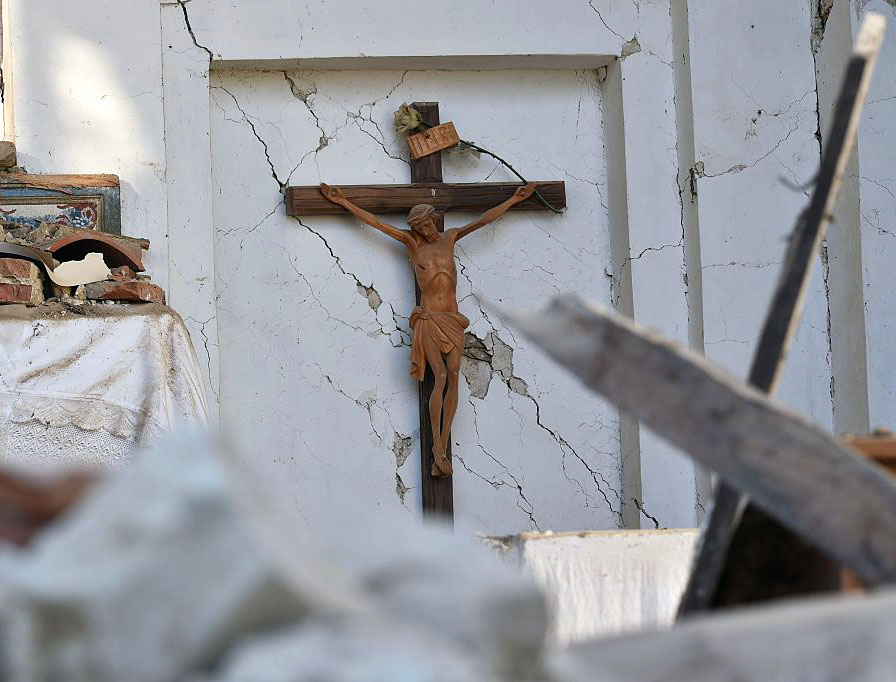 Many people are still recovering from the Aug. 24, 2016 quake that left 299 dead and many more injured.

VATICAN CITY — Pope Francis recalled the devastating earthquake that struck central Italy four years ago today by publishing a tweet expressing his solidarity with those hardest hit and telephoning the bishop of the region most affected.

“I renew my prayer for the families and communities that have suffered the most damage, so that they can go forward with solidarity and hope,” the Popetweeted, repeating comments he had made after reciting the Angelus on Sunday.

At 7 a.m. on Sunday morning, he called Bishop Domenico Pompili of Rieti on the bishop’s cellphone, asking him to pass on his greetings to the people of the diocese during a Mass today to mark the disaster.

“Tell them I am close, and that I send them my blessing,” Francis said.

At yesterday’s Angelusaddressthe Pope also expressed his hope that reconstruction of the region, which has been criticized for its long delays, “might accelerate so that the people may return to live serenely in this beautiful territory in the Apennine Hills.”

At 3:36 a.m. on Aug. 24, 2016, a 6.2magnitude earthquakestruck an area 47 miles southeast of Perugia and 90 miles northof Rome, causing 299 deaths and leaving many injured. The epicenter was in the medieval town of Accumoli which was flattened by the tremor, and the nearby towns of Amatrice and Pescara del Tronto suffered severe damage.

The Umbrian town of Norcia, the birthplace of St. Benedict just 20 miles west of Accumoli, suffered relatively little damage, but it was to be hit by asecond severe earthquaketwo months later that caused widespread destructionofmany churches in the town including its basilica used by a monastery of Benedictine monks.

In hiscommentsto the Italian bishops’ news agency SIR today, Bishop Pompili said Pope Francis has been regularly updated on the situation since the earthquake.

“He has never stopped being interested,” the bishop said, adding that Francis has backed up his words “effectively, as a few months ago, when he shopped in one of our agri-food businesses and visited a community of young people.”

“The Pope is among those who do not wait for an anniversary to remember the earthquake, but he does so discretely and continuously,” the bishop said.

“What keeps an anniversary from falling into rhetoric is this continuity over time,” he continued. “We ask for forgiveness if we’re by chance among those who wake up to this drama only on Aug. 24 [the anniversary].” If we do, he said, “we are simply ‘rhetoricians’ whether we are ordinary people, institutions or the media.”

Pope Francis made a surprise and unannounced visit to Amatrice on Oct. 4, 2016, to show his solidarity with the victims. He said prior to the visit that he’d wished to go “privately, alone, as a priest, as a bishop, as Pope, but alone,” in order to be “close to the people.”

Colombian bishop on massacres: We’...

St. Bartholomew the Apostle — From...