Pope Francis meets with Cardinal Pell at the Vatican 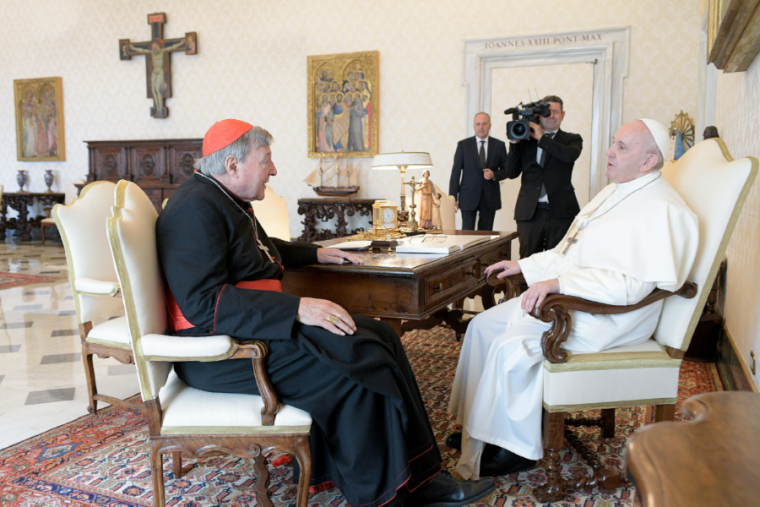 Pope Francis meets with Cardinal Pell at the Vatican

A video of the meeting showed the pope shaking the cardinal’shand, while saying: “It is a pleasure to meet you again.”

After the two men were seated, the pope added: “Thank you for your testimony.”

A source close to the cardinal told the National Catholic Register that the meeting, which lasted 30 minutes, was “very warm and cordial.”

Pell, the former prefect of the Secretariat for the Economy,arrived in RomeSept. 30 on his first visit to the city since he left in 2017 for Australia to prove his innocence of abuse charges.

The Australian cardinal returned less than a week after thedramatic resignationof Cardinal Angelo Becciu. Pope Francis asked Becciu to resign as prefect of the Congregation of the Causes of Saints and from the rights extended to members of the College of Cardinals Sept. 24 amid allegations of financial misconduct against the Italian prelate.

Becciu had worked previously as the number two-ranking official in the Vatican’s Secretariat of State, where, CNA has previously reported, he repeatedly clashed with Pell over the reform of Vatican finances.

Pell responded to the news of Becciu’s resignation with gratitude.

“The Holy Father was elected to clean up Vatican finances. He plays a long game and is to be thanked and congratulated on recent developments,” Pellwrotein a statement sent to CNA Sept. 25.

Becciu hasdenied claimsin the Italian media that he transferred money to Australia in an attempt to influence Pell’s trial.

In astatementissued through his lawyer Oct. 7, he said that he had never sought to interfere in the process.

The pope asked Pell in 2014 to take charge of the newly created Secretariat for the Economy and to lead efforts at reforming Vatican financial affairs. After charges of sexual abuse were brought by Victoria police, Pell took temporary leave of his role in 2017 to return to Australia and defend his name.

Pell faced allegations from a single accuser related to his time as bishop of Melbourne. He spent 13 months in solitary confinement after he was initially convicted and given a six-year prison sentence, before being vindicated on appeal to the High Court.

Pell’s term of office as head of the Vatican’s financial secretariat expired during his time in prison, with Pope Francis naming Fr. Juan Antonio Guerrero Alves, SJ, to succeed him in 2019.

“I hope the cleaning of the stables continues in both the Vatican and Victoria,” Pell said in his statement following Becciu’s resignation.