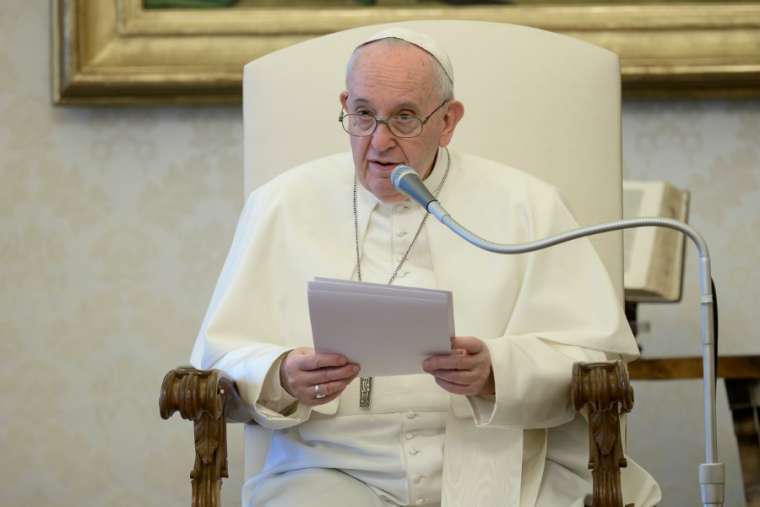 Pope Francis pointed to an experience of 17th-century mathematician and philosopher Blaise Pascal as an important testimony of how one can sense the living presence of God in personal prayer.

The pope called a small handwritten note that was discovered sewn into Pascal’s coat at the time of his death “one of the most original texts in the history of spirituality.”

“It begins thus,” Pope Francis said. “‘God of Abraham, God of Isaac, God of Jacob not of the philosophers and of the learned. Certitude. Certitude. Feeling. Joy. Peace. God of Jesus Christ.’”

Pope Francis said June 3 that in these lines from Pascal’s “Memorial,” the philosopher “expresses not an intellectual reflection that a wise man like him could conceive of God, but the living, experienced sense of his presence.”

“Pascal even notes the precise moment in which he felt that reality, having finally met it: on the evening of November 23, 1654,” Pope Francis said.

The experience of Pascal, who was known in his time as a mathematician and a scientist, on that night in 1654 led him to more fervently practice his Catholic faith with asceticism and written apologetics.

This was not the first time Pope Francis has spoken of his admiration for the French thinker. In an interview in July 2017, the Jesuit pope said that he believes that Pascal, who was at times a harsh critic of the Jesuits, “deserves beatification.”

For Pascal, Pope Francis said, God is not an abstract cosmic concept: “No, he is the God of a person, of a call, the God of Abraham, of Isaac, of Jacob, the God who is certainty, who is feeling, who is joy.”

“The God of Abraham becomes ‘my God,’ the God of my personal history, who guides my steps, who does not abandon me; the God of my days, the companion of my adventures,” the pope said.

He said that Abraham was so familiar with God that he was capable of arguing with him, while remaining faithful.

“I wonder and I ask you: do we have this experience of God?” the pope asked in his weekly catechesis offered via livestream.

The pope encouraged people to learn to pray with faith by listening to the Lord and having a discussion with him, even if this discussion is about something that angers us.

“We are not afraid to argue with God,” he said. “This is a form of prayer because only a child is able to get angry with his father and then meet him again.”

Pope Francis encouraged people to read the Book of Genesis to see “how Abraham lived prayer in continuous fidelity to that Word.”

“We learn from Abraham to pray with faith, to dialogue, to discuss, but always willing to accept the word of God and put it into practice,” he said.

“When God speaks, man becomes the receptor of that Word and his life the place where he asks to become incarnate,” he said. “This is a great novelty in man’s religious journey: the life of the believer begins … as a call, as a place where a promise is fulfilled; and he moves in the world not so much under the weight of an enigma, but with the strength of that promise, which one day will come true.”

After his catechesis, in his greeting to English speakers, Pope Francis addressed the ongoing protests and riots happening across the U.S. in response to the death of George Floyd.

“We cannot tolerate or turn a blind eye to racism and exclusion in any form and yet claim to defend the sacredness of every human life. At the same time, we have to recognize that the violence of recent nights is self-destructive and self-defeating. Nothing is gained by violence and so much is lost,” Pope Francis said.