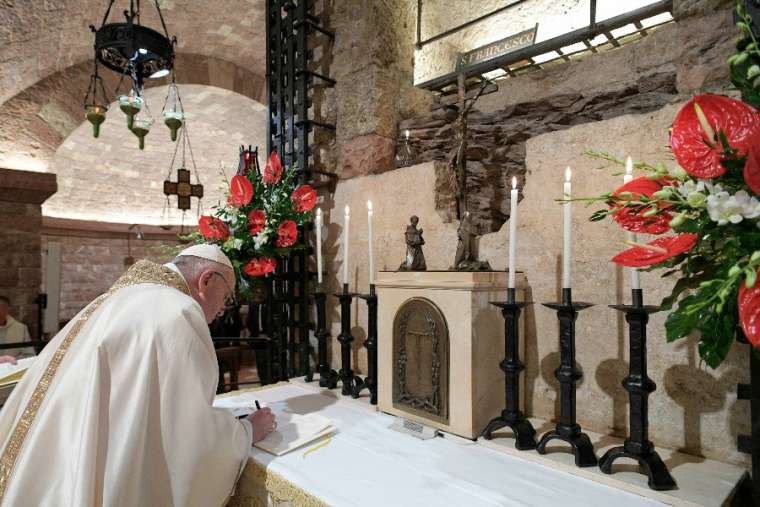 Pope Francis signed his new encyclical,Fratelli tutti, Saturday during a visit to Assisi.

In his first official trip outside Rome since the pandemic struckItaly, the pope celebrated Mass at the tomb of his namesake, St. Francis of Assisi.

“Fratelli tutti,” the encyclical’s opening words, means“All brothers” in Italian. The phrase is taken from the writings of St. Francis, one of the major inspirations for Pope Francis’third encyclical, on fraternity and social friendship. The text will be released Oct. 4, St. Francis’ feast day.

The pope stopped off en route to Assisi tovisita community of cloistered Poor Clares in the Umbrian town of Spello. It was his second private visit to the community, following a surprise trip in January 2019.

Members of the Poor Clares of Santa Maria di Vallegloria visited Francis at the Vatican in August 2016, when hepresentedthem with the apostolic constitutionVultum Dei quaerere, outlining new norms for women’s cloistered communities.

The pope arrived in a rainswept Assisi on Saturday afternoon, making a brief stop to greet another community ofPoor Clares in the town, according to ACI Stampa, CNA’s Italian-language news partner.

He then celebrated Mass at the tomb of St. Francis in Assisi in the Basilicaof St. Francis. ACI Stampa reported that those present included religious representing various branches of the Franciscans, Cardinal Agostino Vallini, pontifical legate for the Basilicas of St. Francis and St. Mary of the Angels in Assisi, local Bishop Domenico Sorrentino, and Stefania Proietti, Assisi’s mayor.

The Mass, which was private butlivestreamed, followed the readings for the feast of St. Francis.

The Gospel reading wasMatthew11:25-30, in which Jesus praises God the Father, “for although you have hidden these things from the wise and the learned you have revealed them to the childlike.”

Jesus then says: “Come to me, all you who labor and are burdened, and I will give you rest. Take my yoke upon you and learn from me, for I am meek and humble of heart; and you will find rest for yourselves. For my yoke is easy, and my burden light.”

The pope did not preach after the Gospel, but instead observed a moment of silence.

Before signing the encyclical on the tomb of St. Francis, he thanked officials from the Vatican Secretariat of State, present at the Mass, who oversaw the text’s translation from Spanish into different languages.

Pope Francis’ 2015 encyclical,Laudato si’,had a title taken from St. Francis of Assisi’s “Canticle of the Sun.”Prior to that he publishedLumen fidei, an encyclical begun by his predecessor, Benedict XVI.

Assisi is the focal point of several major Church events this fall, including the Oct. 10beatificationof Carlo Acutis, and the “Economy of Francis” summit, scheduled to take place in November.

How Pets Can Aid Us in Becoming Mo...