Pope Francis: Subsidiarity means everyone has a role in healing society 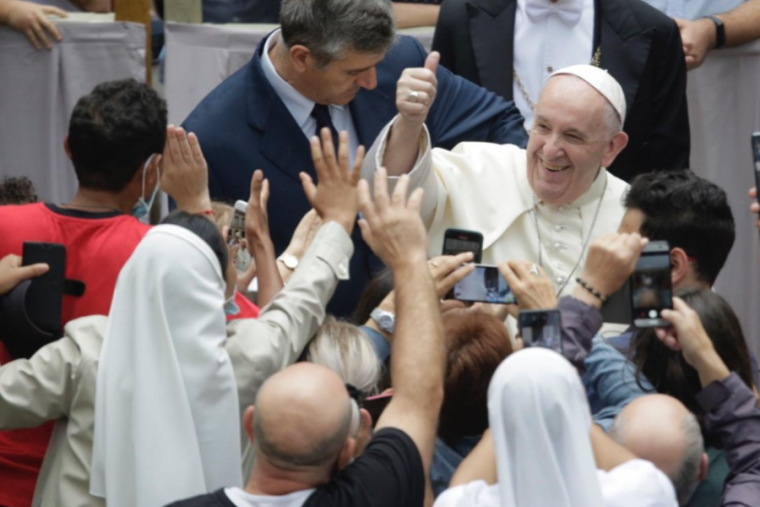 Pope Francis: Subsidiarity means everyone has a role in healing society

Pope Francis said Wednesday that he is worried that large pharmaceutical companies are listened to more than front-line healthcare workers in pandemic recovery and that the Catholic principle of subsidiarity is the solution.

“When a project is launched that directly or indirectly touches certain social groups, these groups cannot be left out from participating … the wisdom of the humbler groups cannot be set aside. Unfortunately, this injustice happens often in those places where huge economic and geopolitical interests are concentrated,” Pope FrancissaidSept. 23.

“Let’s think of the grand financial assistance measures enacted by countries. The largest financial companies are listened to rather than the people or the ones who really move the economy,” the pope said in Vatican City’s San Damaso Courtyard.

Pope Francis explained that the principle of subsidiarity was necessary in these situations to ensure the best solutions. Subsidiarity is theidea, deeply rooted in Catholic tradition,that the authority closest to a local need is best suited to tackle the issue. It is opposed to all forms of collectivism and sets limits for state intervention.

“To emerge better from a crisis, the principle of subsidiarity must be enacted, respecting the autonomy and the capacity to take initiative that everyone has, especially the least,” Pope Francis said.

The Catechism of the Catholic Church states that, according to the principle of subsidiarity, “a community of a higher order should not interfere in the internal life of a community of a lower order, depriving the latter of its functions, but rather should support it in case of need and help to coordinate its activity with the activities of the rest of society, always with a view to the common good.”

The pope underscored that the wisdom and contribution of individuals,families, associations, businesses, and the Church were all needed to revitalize society.

“The principle of subsidiarity allows everyone to assume their own role in the healing and destiny of society,” he said.

Religious freedom and freedom of expression are a critical component that allow for these voices to be heard, according to the pope.

The pope’s reflection on subsidiarity was part of his series of weekly catecheses, launched in August, on Catholic social teaching. Entitled “Healing the World,” the pope’s message at his Wednesday audiences focuses on the COVID-19 pandemic in light of Churchteaching.

In previous weeks, Francis has spoken about the importance ofsolidarityandthe common good. This week he noted that subsidiarity and solidarity were both needed for the good of society.

“This path of solidarity needs subsidiarity,” he stressed. “In fact, there is no true solidarity without social participation, without the contribution of intermediary bodies: families, associations, cooperatives, small businesses, and other expressions of society… This type of participation helps to prevent and to correct certain negative aspects of globalization and actions of countries, just as it is happening regarding the healing of people affected by the pandemic.”

“These contributions ‘from the bottom’ should be encouraged. How beautiful it is to see the volunteers during the crisis. The volunteers come from every part of society, volunteers who come from well-off families and those who come from poorer families. But everyone, everyone together to emerge. This is solidarity and this is the principle of subsidiarity.”

Another important component of subsidiarity, the pope explained, is that those with a higher responsibility look out for the good of those without adequate resources.

“After the great economic depression of 1929, Pope Pius XI explained how important the principle of subsidiarity was,” Pope Francis said.

“On the one hand, and above all in moments of change, when single individuals, families, small associations and local communities are not capable of achieving primary objectives, it is then right that the highest levels of society, such as the state, should intervene to provide the necessary resources to progress.”

“For example, because of the coronavirus lockdown, many people, families and economic entities found themselves and still find themselves in serious trouble. Thus, public institutions are trying to help through appropriate interventions. On the other hand, however, society’s leaders must respect and promote the intermediate or lower levels.”

At the end of his general audience, which took place on a rainymorning, the pope mentioned that he would bless a bell named “The Voice of the Unborn,” commissioned by the “Sì alla Vita” foundation.

“It will accompany the events aimed at remembering the value of human life from conception to natural death,” he said, noting a desire that its sound would awaken the consciences of legislators and all people of good will.

“During the lockdown, the spontaneous gesture of applauding, applause for doctors and nurses began as a sign of encouragement and hope. … Let’s extend this applause to every member of the social body, to each and every one, for their precious contribution, no matter how small,” Pope Francis said.

“Let’s applaud the ‘castaways,’those whom culture defines as those to be ‘thrown out,’ this throwaway culture –that is, let’s applaud the elderly, children, persons with disability, let’s applaud workers, all those who dedicate themselves to service. Everyone collaborating to emerge from the crisis.”

Know some excellent parishes of th...

Who is the Morning Star in the Bib...