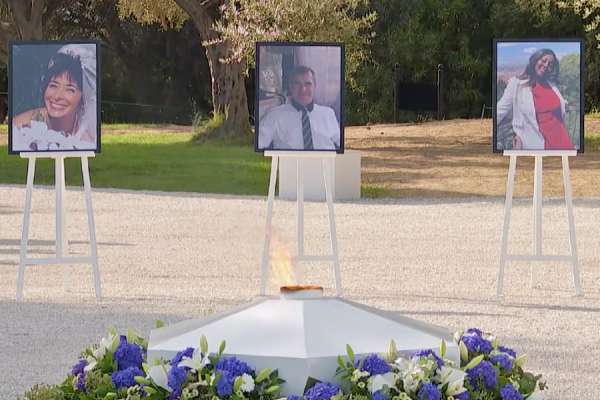 Rome Newsroom, Nov 7, 2020 / 11:00 am (CNA).- Pope Francis will meet with families of the victims of the Nice basilica attack, the city’s mayor said Saturday at the national memorial service for the victims.

In a speech honoring the Catholics killed in the Oct. 29 terrorist attack at the Basilica of Notre-Dame in Nice, Mayor Christian Estrosi said that he will help fulfill one of the victims’ biggest dreams: to meet the pope.

“Dear Nadine … with your husband Joffrey… I will make your biggest dreams come true by going to Rome together with the other families to meet with Pope Francis,” the mayor said at the livestreamed outdoor memorial in Nice Nov. 7.

Nadine Devillers, 60, was the first of three victims of a knife attack in the Nice basilica. She was found near the holy water font with a deep throat cut, nearly beheaded.

Her husband of 26 years, Joffrey Devillers, spoke fondly of Nadine’s “magnificent smile,” their beautiful wedding, and his wife’s love for cheese in an interview with the French newspaper Nice-Matin earlier this week. He also said that meeting the pope had been one of his wife’s “biggest dreams.”

“It was one of her biggest dreams that now only I can fulfill,” Devillers said.

During the national memorial, the French Prime Minister Jean Castex placed the Medal of Recognition of Victims of Terrorism before a large portrait of Nadine in her wedding dress. He also honored the two other victims: Vincent Loques and Simone Barreto Silva.

The prime minister said that Simone Barreto Silva went to pray at the basilica nearly every morning. The 44-year-old mother, originally from Brazil, leaves behind three children. She was attacked inside the basilica before taking refuge in a nearby cafe, where she died from stab wounds. French media reported that a witness heard her say before she died: “Tell my children that I love them.”

One of Simone’s favorite songs, “Toda menina baiana,” by Brazilian musician Gilberto Gil was played at the memorial, which was broadcast via livestream.

Vincent Loques, the sacristan of the Notre-Dame Basilica in Nice, was killed the day before his 55th birthday. He was the father of two daughters and had served the basilica for more than 10 years.

“He was outstanding when it came to preparing the Christmas nativity scene. I imagine what will be felt by all those who will try to replace him in that task,” Castex said at the memorial.

Other government authorities, including former president Nicolas Sarkozy, were present at the memorial.

“Terrorism attacks who we are, what makes our identity, our freedom, our culture and finally our lives. The enemy, we know him, not only he is identified, but he has one name, radical Islamism,” Prime Minister Castex said.

Private funeral Masses have been offered for Vincent Loques and Simone Barreto Silva in the Basilica of Notre-Dame in Nice. Nadine Devillers is yet to be buried due to her autopsy for the ongoing investigation into the attack.

A total of 11 people were placed in police custody and then released in the anti-terrorism investigation. On the day of the attack, French police shot and arrested the perpetrator, who was identified as the 21-year-old Brahim Aouissaoui, based on an Italian Red Cross document he was carrying. He had an additional two knives and a Quran in his backpack.

Aouissaoui, a Tunisian who had arrived in Nice shortly before the the day of the attack, tested positive for the coronavirus while hospitalized for his injuries in Nice. On Nov. 6 he was transferred to Paris, where he remains hospitalized, and will be questioned by investigators.

France is currently under a second national lockdown due to a spike in coronavirus cases in the country this fall. With the current restrictions in France and Italy, it is unclear when the families of the Nice attack victims will travel to Rome to meet the pope.

Pope Francis met individually with the families of the victims of the 2016 Bastille Day terrorist attack in Nice, which left 85 people dead, two months after the attack.